Spotlight on Alex Rigsby: On setting records and finding her place

The third in a series of features on Wisconsin women's hockey players focuses on Alex Rigsby, who's spent her entire career in the shadow of a legend.

Share All sharing options for: Spotlight on Alex Rigsby: On setting records and finding her place

The resemblance is hard to miss. Starting her career at Wisconsin directly on the heels of Patty Kazmaier Award winner Jessie Vetter, senior captain goaltender Alex Rigsby was always going to be likened to her predecessor. But with a familiar poof of curly hair sticking out of the back of her goalie mask, it made the comparisons between the two inevitable.

Four years later, Vetter is about to start in her second Olympics, yet she's rarely mentioned locally without the words "Badger legend" in front of her name. While Rigsby is still smarting from not being invited to this year's pre-Olympic camp and as Sochi approaches, it feels like the shadow Vetter casts on Rigsby looms even longer.

The constant comparisons have to be grating and tiresome for Rigsby. And they certainly aren't new. But the thing that never seems to get mentioned when it comes to comparing these two most recent Badger goalies is how well Rigsby measures up.

Halfway through her senior season, Rigsby is the owner of three career records at Wisconsin. Her win on Saturday -- her 93rd -- gave her the Badger record. She also sits third-place all-time on the NCAA career win list and is just eight wins from taking over second. Minnesota's Noora Räty's career 114 wins are out of Rigsby's reach.

Rigsby is the only goalie in Wisconsin history to have made 1,000 or more saves in a single season and she set the single-season record with 1,044. She owns the career mark for minutes played and, with one more, will tie the school record for games played. Heading into this season, Rigsby was third in save percentage, but just .001 percent behind Vetter and Christine Dufour.

She's also the first goaltender in USA Hockey history to have competed with the US National Under-18, Under-22 and Senior women's teams.

She's the only female ever to be drafted into the USHL (United States Hockey League).

She leads the nation in goals against average (1.03 allowed per game) and save percentage (95.7) starting off the second half of the season.

The list of accomplishments isn't insignificant, yet Rigsby often finds herself without the recognition that her four years at Wisconsin shouldn't be easily dismissed.

And she says none of that is really on her radar.

"See, the recognition doesn't really bother me," Rigsby said. "I don't pay attention to that stuff. I don't necessarily know when I'm breaking a record or have a record or second, so it just doesn't affect me."

And while it does Rigsby credit to not be aware or bothered by the fact that she doesn't always come out favorably in the inevitable comparisons, its difficult not to get indignant in her stead and want to see her receive the accolades she rightly deserves. 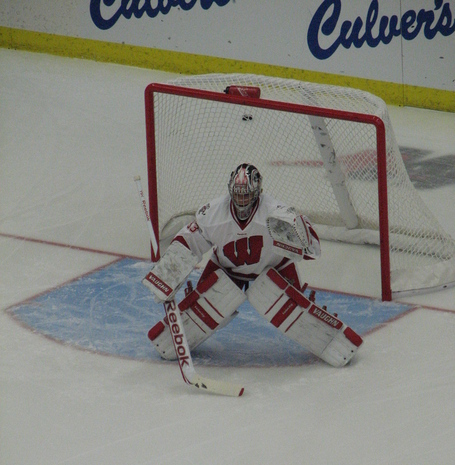 That team-first attitude comes through every time she's asked about the records. When she set the wins record on Sunday, she said: "I think it's quite an honor, but it's also definitely a team achievement. I've been lucky enough to play on a team as great as this one throughout my career here as a Badger."

It's also likely one of the reasons her teammates voted her as team captain this season -- a rarity for goaltenders. She's the first goaltender captain for the Wisconsin women's hockey team since it's inception.

There can be limitations that stem from being the captain and being stuck at one end of the ice. When there's a stoppage in play and the lines might huddle on the ice or at the bench, Rigsby isn't likely to be involved in those moments. That's where she says the assistant captains step up.

"I think this year we have vocal assistant captains, as well, so I think they've helped in those situations where I'm not necessarily on the bench, because it is way different not having a captain (there)."

One thing a goalie captain brings to the team is the vision of the whole ice. From her spot at the end of the rink, Rigsby is able to see more of the game as a whole -- how plays develop and opponents attack -- and that bigger view on things is something she's not afraid to share.

"I'm a vocal goaltender and I like to speak to the team between periods and tell them what I'm seeing. It's a completely different view of what I'm seeing compared to what people are seeing either on the ice or on the bench looking out. I pretty much see everything that's going on when I'm in net and I'm focused and really keen on what's going on, so I think that's helped this season, too.

"I'm talking to the team and just being a cheerleader in the back, too. Just keeping everyone positive."

It may be Rigsby herself that needs the reminders to stay positive this season. No matter what the Badgers do, she will likely always look back at 2014 with disappointment. She -- and it should be said, coach Mark Johnson and her teammates -- didn't plan on being in Madison for this season. Johnson specifically brought in freshman goaltender Ann-Renée Desbiens this season with the expectation that Rigsby would be competing with Team USA at the Sochi Olympics.

It shocked everyone, Rigsby most of all, when she wasn't even asked to join the pool of players from which the final roster for Team USA would be chosen. And while she's said more than once that snub has left her playing with a little more animosity this season, she hasn't really elaborated.

"My main focus all the time is making sure I’m doing the best I can to help our team win and be most successful." -Alex Rigsby

When asked directly about not making the team this year, she gave her standard response.

"I'm definitely playing with a chip on my shoulder. I just want to prove whoever doubted me along the way that I can have a good season."

But later, when asked about the natural rivalry that exists because she's essentially handcuffed by Vetter at the national level, Rigsby expressed frustration at the process that led to her not making the cut.

"I think one of the things that was kind of unfortunate going through the national team is that I was never really given an opportunity," she said. "I was never able to play in a big game because Jessie was there. So that was probably one of the more disappointing things is I was never gained that experience that I was looking and wanting to get so I could help the team in any way possible."

Despite the resentment at the situation she found herself in, Rigsby said she brought lessons from national team camps back to Wisconsin with her.

"It definitely helped going through those camps and training with those girls at high levels and playing with the best girls in the world. I think that's really brought back a lot to the program here."

As far as being handcuffed, that's something she knew could happen the moment she chose to become a goaltender full-time.

"That's the tough thing about goaltending," she said. "I always knew this growing up that there's only one spot for the starter. I mean, sometimes you rotate and I did rotate in high school playing every other game. My freshman year (at Wisconsin), I had to battle it out and was fortunate enough to get the opportunity to play. That's the hard part. You know that there's only two starting positions, max."

As for whether the experience this year has soured her for the future or whether she'll look to try to be a part of Team USA in 2018, Rigsby said she hasn't thought that far in advance. She'll graduate from Wisconsin in December 2014. She said she hopes to continue to skate, though she was non-committal as to in what capacity that might happen. She said she'd need to find a job and a new place to train, and that she was thinking about playing next year. She admitted the whole idea of having to think through post-college plans was "pretty stressful, actually."

And that's when you're reminded that these are just twenty-something college students whose hopes and dreams are being played out in a very public manner.

When you talk women's hockey and the University of Wisconsin, there are expectations of post-season play, National Championships, Patty Kazmaier awards and Olympics. Fair or not, that's the precedent that's been set and those are the aspirations of the teenagers that begin playing their freshman year at UW.
So when Wisconsin hasn't won a national championship since 2011 and missed the NCAA tournament last year, and Rigsby failed to make the Olympic pool, those aren't just facts, those are major disappointments and failed life goals. It's not always easy to remember that human element to the fandom we ascribe to.

But instead of focusing on the past or worrying too much about the future, Rigsby is focused on this unique team that is getting contributions from every corner.

"Moving forward, we know that it's no easy road ahead of us," she said. "I think we have a really good team this year and I think we're doing a really good job of staying focused one game at a time and one series at a time and I think that's really going to help us in the end not get ahead of ourselves and not take anything for granted. We're going to have to work every game no matter who the opponent is."

In speaking with her, you get the idea that the one-day-at-a-time philosophy may serve her well in life, as well as on the ice.