Talking future Badgers and the current list of visitors for the Northwestern game.

This is the month the dominoes start to fall. September brought Wisconsin some nice pieces. But those might not be the pieces you were looking for.

You want to know about your Joe Mixons and your Jalen Browns, right? Well, we're going to start seeing where these names are about to land. Oct. 12 is going to be a massive day in terms of visits for the Badgers, and those who have already come will start to finish up their visits.

We're about to see just how good the first full Gary Andersen class is going to be.

Breaking down the Oct. 12 visits

I know that this list might not be comprehensive. But the name talent that is coming already warrants mentioning.

This is your game-changer. The Badgers are tussling with Oklahoma as well as various Pac-12 schools (Cal, Oregon, UCLA and Washington) for the services of the Oakley, Calif., five-star talent. And with Mixon, there's a reasonable path to see him coming to Madison. For one, his last official visit is to Madison. For two, if Melvin Gordon gets healthy and returns to wrecking defenses, Mixon would be a starter from jump street.  There's a chance Andersen brings in a five-star talent in year one.

You can assume Mama would also be one who would start from day one. And the Badgers do have the advantage of hosting Mama first. But that being said, while the Badgers are holding interest, he has an official visit scheduled with Alabama on Nov. 8. Also, a Lane Kiffin-less USC is something he seems to be definitely interested in. He may join Mixon and another recruit from his high school, but I wouldn't hold my breath on this matter.

I know you've been excited for Brown, and he's definitely a talent who could start right away. But the thing about Kamara? He's currently a more highly regarded recruit by those experts. The Badgers are the first visit he's going to take, and in a three-horse race between us, Pittsburgh and Virginia, Kamara is definitely someone who we could see in Badger red. 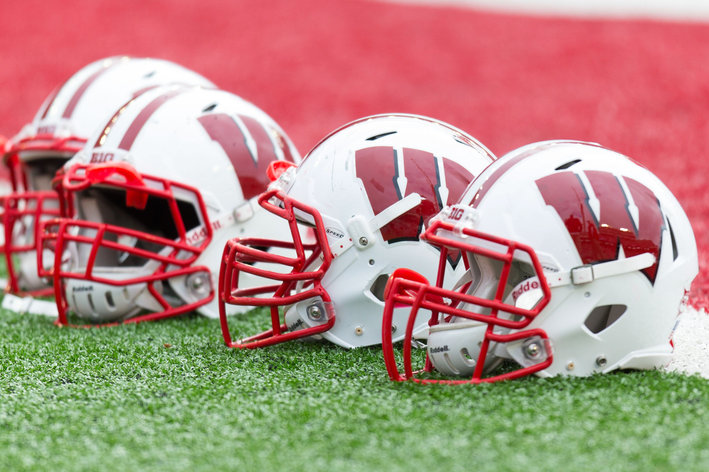 The vibe on Plattenburg was always that he was going to Oregon. But that being said, Plattenburg taking this visit means the Badgers aren't out of the race for the four-star Houston cornerback. He's definitely physically gifted, and he would definitely be in the race to start opposite of Sojourn Shelton. But that being said? Plattenburg's spent the last year in California and the Badgers are fighting the powers of the Pac-12 to get him.

Even after getting the commitments of Austin Hudson and Lubern Figaro, Andre Godfrey might be considering making it a trio. The Badgers are in a race with Louisville (who already has three safety commits) and N.C. State for this in-the-box thumper. And he may actually grow out of the position even if he commits and the Badgers get themselves a third safety. As is, he would provide some positional versatility from jump street.

There were rumors Morris was going to commit in August. But he's still a solid favorite for the Badgers. The Mesa Community College corner is the third-ranked JUCO at the position, and like the reason why the Badgers haven't officially signed a talent like Joe Keels, it's a matter of dotting the i's and crossing the t's in regard to academics before Morris becomes a Badger.

As of now, it looks like a three-cornerback day for the Badgers. Hallmon was a recent decommit from Rutgers and has always had interest in the Badgers. He's friends with Godfrey and Shelton, so there is a level of comfort here for Hallmon. But that being said, teenagers are capricious. Always remember that.

Compared to Mixon, James seems like a consolation prize. But James has been productive as a well-built 211-pounder at Notre Dame High School in Illinois, with 4.41 seconds speed in the 40-yard dash. And if you look at his Hudl profile, you'll notice that he has a certain shiftiness to go with that speed to make defenders miss. He may not be Mixon. He's intriguing. And as he seems close to committing, that's a nice thing to have.

He's graded as a two-star talent, and he's going to either have to gain weight or change positions before he plays for the Badgers. If you didn't know better, you might think that because he's from the same high school as Mama, he gets a trip to Madison for the Northwestern game. But as a raw athlete, he does bring a 4.6-second 40-yard dash time to the proceedings. In the Dave Aranda defense? He should well find his place if he commits.

The five "other" receivers the Badgers could bring in

The expectation is that the Badgers are going to bring in at least one more receiver on a scholarship, and if they can get either Brown or Kamara, it may even be two or three. But the fact of the matter is the Badgers need some help at the position. And there's definitely intrigue on a level below your heroes. Listed in no particular order:

Krenwick Sanders, 6-foot-2, 195 pounds: Ever since he visited Camp Randall in September, Sanders has listed the Badgers as a favorite. This three-star talent from Jesup, Ga., would be the sort of talent that would fit well with the Badgers. Scouts praise him for good quickness, strong athleticism and being very dangerous over-the-top in play-action. Remind you of anyone?

Adly Enoicy, 6-foot-5, 205 pounds: The Badgers are also a favorite in the race for the Delray Beach, Fla., native. He's obviously tall, and he seems like he has great concentration. Looking at this highlight film, he saved his 2012 quarterback on more than one occasion.

Emanuel Beal, 6-foot-1, 203 pounds: While the Badgers aren't the nominal favorites (Kansas State is), Beal is giving his top five equal consideration. And the Powder Springs, Ga., native definitely has that sort of skill set that would be very interesting very quickly for the Badgers next year.

Jalen Embry, 5-foot-11, 180 pounds: The Detroit native is the thing that's not like the other on this list, in that he's more short and fast in the Jakarrie Washington sort of mold than your tall, quick dudes like the other receivers the Badgers are going after. That being said, he's an impressive athlete who would do well for the Badgers even if he flips over to defense. That is, if the Badgers maintain their lead over Iowa.

Kenric Young, 6-foot-2, 180 pounds: The two things that excite me most about Young are his hands and his willingness to run block. A cursory glance at his Hudl shows that he doesn't habitually catch passes against his body, and for a team like the Badgers, that's a skill set that plays quickly.