For the second time in two nights, the Wisconsin men's hockey team found itself trailing on home ice. This time, however, the Badgers found the answers and saved a victory.

Junior defenseman Jake McCabe recorded his first career multi-goal game, including the winner in the third period as Wisconsin (11-6-1, 2-2-0-0 Big Ten) pulled out a 4-3 win against Alaska-Anchorage.

"In terms of growth and leadership, it was fun to be on the bench with those kids," said Wisconsin coach Mike Eaves. "They took the reins about halfway through the games, and -- when we were down 3-2 and it was fun to see that growth." 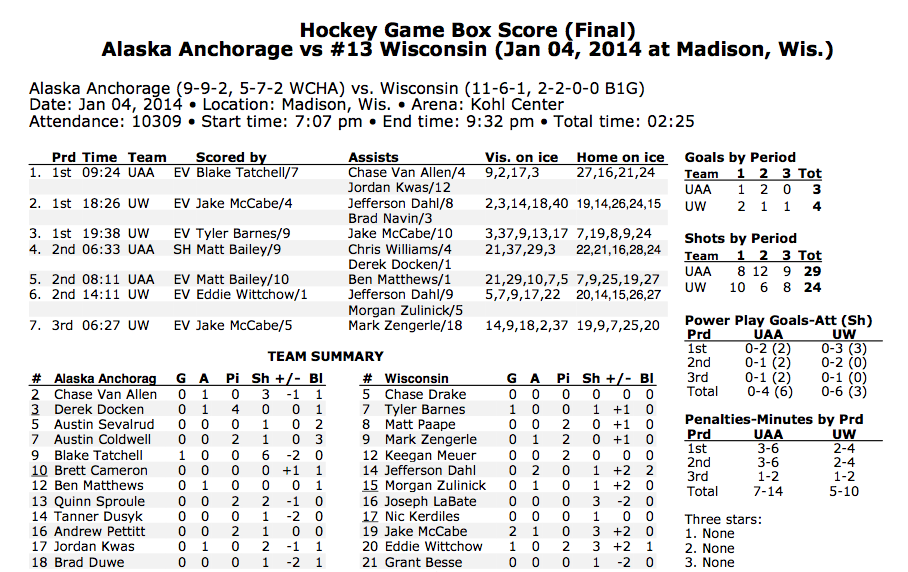 The Seawolves got on the board first, but McCabe and senior forward Tyler Barnes each scored in the final minutes of the first period to put the Badgers ahead at the break.

That lead did not last long.

UAA senior Matt Bailey netted two second-period goals to put the Seawolves back on top before sophomore defenseman Eddie Wittchow scored his first-ever goal as a Badger to tie the game back up at 3-3 heading into the final frame.

That score would hold until the 6:27 mark in the third when McCabe fired a shot that deflected off a Seawolf defenseman and into the UAA net.

"I'll take that second goal any night of the week," McCabe said. "To get puck luck like that, it hasn't really been in our favor. So I guess the hockey gods were on our side tonight and we'll take that any day of the week."

Sophomore forward Nic Kerdiles made an abbreviated return after his stint with the U.S. under-20 national team came to an end earlier this week, but left the game with a shoulder injury.

The Irvine, Calif., native did not return to the game, and it appears the young centerman might be sidelined for some upcoming games.

"They have to do some x-rays and that," Eaves said. "It's not day-to-day I know that for sure, you're probably looking at a couple of weeks."

Wisconsin continues its home-stand next week when the seventh-ranked Michigan Wolverines come to the Kohl Center for a two-game series.