Without Nic Kerdiles and Sean Little, the Badgers were dominated by Alaska Anchorage Friday night in a 3-2 loss.

Wisconsin entered the weekend undefeated at home, and Alaska Anchorage came into the series winless on the road, but the roles were reversed Friday, as the Seawolves pushed the Badgers around the rink in a 3-2 non-conference victory.

8,411 fans at the Kohl Center in Madison witnesses the lackluster performance by the Badgers, one in which head coach Mike Eaves was left searching for answers.

"(Anchorage) deserved that game," Eaves said. "They were better than us in so many areas it was kind of a joke. The coaching staff was scratching its heads, wondering where our players were tonight. They won races. They were stronger than we were on their sticks. Kept pucks, made good plays. They deserved that game."

The resurgent Anchorage squad took an early lead just 37 seconds into the contest when Scott Allen was able to find the twine for his 11th goal of the season.

Senior winger Tyler Barnes took the blame for the first goal, as it was his man on the back check that was able to give UAA the early lead. 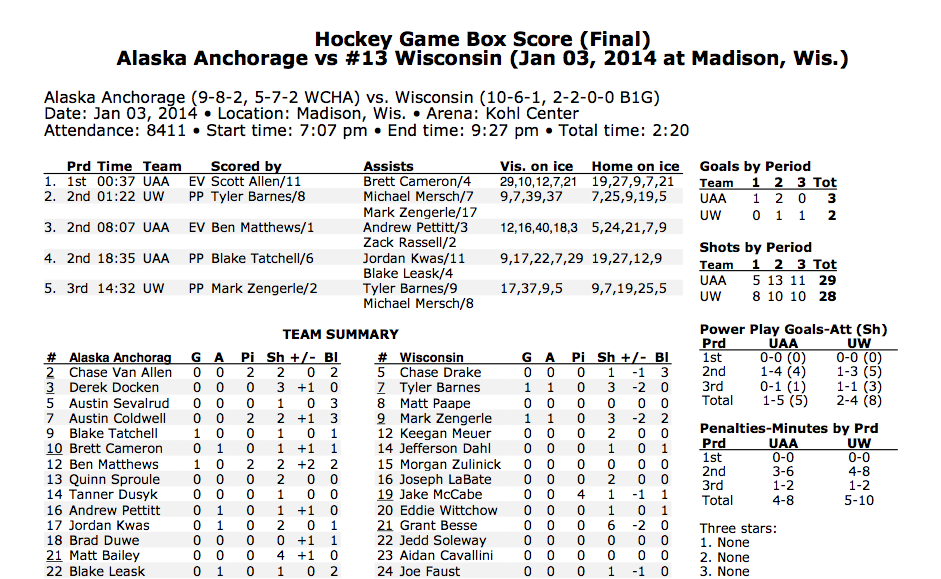 "The first one they had a blocked shot and I didn't backcheck all the way and my guy was the guy that ended up putting it in the empty net," Barnes said.

Barnes would rebound with a goal of his own in the second period, as he was able to knock a waist high rebound out of the air into the net for his eighth goal of the season.

Wisconsin's goal was able to stem the tide momentarily, but Anchorage was quickly able to turn the momentum with second period goals from Ben Matthews and Blake Tatchell.

The Badgers would fight back late in the game with a power play goal from Mark Zengerle, but it wasn't enough, as No. 13 Wisconsin was upset by Anchorage.

Zengerle was one of Wisconsin's few bright spots Friday, but even he took responsibility after the loss.

"We got outworked tonight," Zengerle said. "And it's not really part of our culture here at Wisconsin and we pride ourselves on hard work and they outworked us tonight."

The Badgers must be better in the finale, as this is obviously a different Anchorage team than we're used to seeing.

"That was just an old fashioned butt kicking, Eaves said. "Anchorage won more races and more battles than I've seen in this building in a long time.

"Some of our big guys looked like peewees out there. Thank goodness we have a chance to redeem ourselves tomorrow."

Wisconsin hosts Anchorage in game two of the series Saturday night at 7 p.m. CT. The game will be broadcast on the Fox Sports Wisconsin alternate channel.