The Badgers struggled to find the net as UND ended their 16-game unbeaten streak.

The Wisconsin women would have been hard-pressed to live up to that moniker on Saturday, as their failure to complete a full 60 minutes of hockey led to their third loss of the season.

North Dakota was 12-0-1 on the season when they scored first and Saturday was no exception. They tallied the first goal of the day when Michelle Karvinen scored on a feed from Tanja Eisenschmid at 11:55 of the first period. Karvinen will be skating for Finland in Sochi in three weeks. Eisenschmid is on Team Germany.

Kelly Jaminski scored Wisconsin's lone goal less than three minutes later on a top shelf wrister that banged around the top corner before ending up in the net. It was a gorgeous shot that left NoDak goalie frozen to her spot. Unfortunately for the Badgers, it would prove to be the lone highlight of what became a long afternoon.

After trading possession in the first, the Badgers seemed to find balance in the second period, controlling the puck for longer stretches and appearing to dominate. They were unable to open a lead and North Dakota slid one past freshman goalie Ann-Renée Desbiens with under a minute to go in the second. 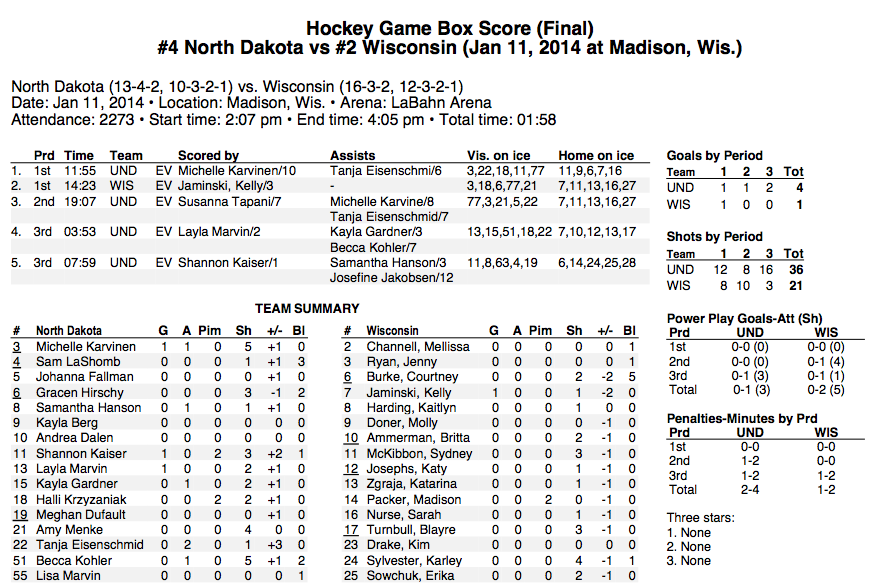 From there, the wheels fell off for the Badgers and the third period was some of the ugliest hockey a Wisconsin women's team has played in the past few years. Instead of responding to the goal, the third period was a series of mental lapses and errors. They were completely taken out of the game and North Dakota took control, scoring twice more before the clock ran out.

As Coach Mark Johnson put it, "After they got the third goal about three and a half minutes into the third, I don't know if we lost some steam, we lost some energy. It certainly wasn't very pretty after that."

"I thought we were going to come out and have a great 20 minutes and maybe win a hockey game and unfortunately they did."

"We certainly needed to be more prepared mentally," said senior assistant captain Madison Packer. "We were definitely prepared as far as their systems and what they're doing and I think we're a team that's in better shape than they are but we didn't stay mentally in tune with the game for the 60 minutes out there and I think that's why we lost.

Desbiens, starting in place of the still not 100% Alex Rigsby, played a solid game. The score doesn't reflect her effort in the net. The defense consistently seemed unprepared to handle a persistent and pesky forecheck by North Dakota and NoDak had an unfettered path to her at all times. Rigsby at 100% doesn't stop the goals put on Desbiens today - she was given little to no support and world-class players were allowed a clear path to her over and over again. The third goal had Desbiens laying on the ice with three NoDak plays poking at her until the puck game loose and they put it home. It was uncharacteristic for Wisconsin to give a team that kind of access to its goalie. The Badgers are lucky the score wasn't higher.

The loss is a tough one for the Badgers who were rolling heading into the holiday break. Packer said that break is difficult in the flow of the season.

"If anyone watched those games in St. Cloud (last week), that was not the best hockey to be playing. If you watched the game out here, that wasn't the best hockey. What's tough with the break is you get a momentum, you get in the swing of things and all of the sudden you get two weeks off so that was hard. I think we finished the first half of the season on a really good note. People overlook Bemidji, but they're a great hockey club. They're fourth in the league right now. They're a good team and we walked around them. We need to take that momentum and look at the things we were doing them and apply them now. Second half of the year we're going to play everyone again. We can't overlook anyone."

Now the Badgers have to put this game behind them and move forward. For Johnson, losing the first game of a two-game set has it's advantages.

"Depending on how we respond is a big indication of where we're at. It's a learning experience." -Mark Johnson

"The nice thing about having lost today is that we get to come back right tomorrow and respond. And so depending on how we respond is a big indication of where we're at. ... It's a learning experience. This group hasn't lost a game since early October. How do you handle it? It's like when you get scored on? How do you handle that next shift? The players are the ones that have to go out and execute and answer for us."

From a player's perspective, Packer says the team has to find the high moments.

"I think we look at the positive things. If you look at second period, we dominated and they struggled, in my opinion. If the puck was an inch to the right a couple of times, they were goals. It's tough. That's a tough one to swallow. We'll watch some film, build off the things that we did well. We've got to play the whole game like we played certain parts of the second period and we'll be ok," she said.

For Desbiens, it's simple.

"We just have to go over it. We have another game tomorrow so we just need to get prepared to play a 60 minute game tomorrow and do better."

The win ends a 16-game unbeaten streak for Wisconsin. It also puts an end to a 14-game home winning streak, which is the second-longest in team history. The Badgers had not allowed more than two goals to an opponent in 29 games and that had them leading the nation prior to Saturday with a .95 GAA.

It's possible that the loss won't Wisconsin's standings too much, as #1 Minnesota lost in a shooutout to unranked Ohio State Saturday night, #3 Cornell tied unranked Mercyhurst Friday night and #5 Harvard lost to unranked Yale on Saturday. The Badgers owe these teams gratitude for adding to the chaos.

Wisconsin and North Dakota return to the ice Sunday at 3 pm for the series finale.