A hat trick from Michael Mersch and a four-point night from Jefferson Dahl propelled the Badgers to a Big Ten conference victory Friday.

Special teams are always key to victory, and Friday was no different, as Wisconsin's penalty kill was able to stymie No. 8-ranked Michigan most of the night en route to a 5-2 victory.

"They blocked a lot of shots, they worked together as a group of four," Wisconsin head coach Mike Eaves said after the game.

In front of 9,499 fans at the Kohl Center on an icy night in Madison, the Badgers (12-6-1, 3-2-0-0 Big Ten) received solid goaltending from Joel Rumpel and saw an offensive outburst from senior Jefferson Dahl in the Big Ten conference win.

Eaves started his post-game press conference by thanking the fans for coming out with such horrible weather.

"For the number of the people that came to get here through the weather, just another attribute to the Wisconsin hockey fan or athletic fan in general." 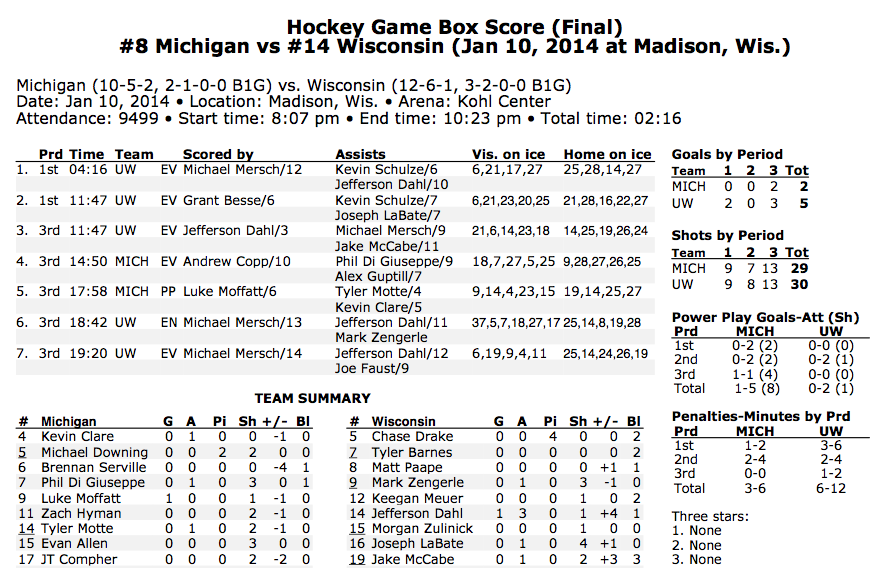 The Badgers opened the scoring in the first period on a fluke goal from Michael Mersch. After taking a drop pass from Kevin Schulze, Mersch fired a snap shot towards the net that bounced off the glove of Michigan netminder Zach Nagelvoort and into the back of the net.

The fluke goals would continue later in the period, as Grant Besse was able to pick up his sixth of the year on a pinball goal 11:47 into the first period. After circling behind the net, Besse threw a puck on goal that hit a Michigan skate and somehow found the back of the net.

After a scoreless second period, Dahl extended Wisconsin's lead to 3-0 on another odd goal that appeared to bounce of his skate and into the net.

Luke Moffatt and Andrew Copp scored goals for Michigan three minutes apart late in the third, but Wisconsin was able to bear down and put things away late.

The Badgers received an empty-net goal from Mersch with 1:18 left to play in the third, a goal that seemed to epitomize the puck possession game Wisconsin wants to play.

"It's so easy to rush down and try to get the empty net goal yourself," Eaves said. "Our guys kept chipping it off the board to the next guy, to the next guy, so unselfishly. Then finally Dahl made a pass to (Mersch) who was the final cog in it.

"They did a lot of great things tonight that I think will pay off as the year goes on."

Mersch completed his hat trick just seconds later, coming down the wing and sniping on a 2-on-1 opportunity.

"Goal scorers love to score goals, and when they get on a roll, that's a good thing," Eaves said. "Ride that wave as long as you can."

Mersch wasn't the only one to have a big night, as his linemate, Dahl, had a career-high four points in the Big Ten victory.

"We know it's going to be a grind in the Big Ten Conference here going down the stretch and we need to be playing our best hockey this time of year," Dahl said. "We won battles tonight, got pucks down low, stuck to our game plan and came out with a win."