The USHL has approved a franchise in Madison, which can be viewed as both a positive and negative for the Badgers.

Yearlong rumors of an expansion United States Hockey League franchise in Madison came to fruition Monday, when the USHL announced the league’s board of directors had approved a new Member Club for the city, commencing with the 2014-15 season.

According to a release from the league, the new team will be owned and operated by Madtown Hockey, LLC, a consortium of veteran and new USHL owners. Team owners include Tom Garrity, Saul Treiman, Charles Bidwill, III, Jeffrey Krol, Brian Schoenborn and Greg Scott.

Bidwell is the name that will likely generate headlines, given that his family has controlled (at least) partial ownership of the Arizona Cardinals' NFL franchise dating back over 80 years. Bidwill's uncle, Bill Bidwill, is currently the principal owner and chairman of the board of the Cardinals.

The name that intrigues me, however, is Schoenborn. A veteran USHL owner who knows the business model to be successful in the league, Schoenborn first joined the league in 1999, when he invested with Minnesota Timberwolves' minority owner Bill Sexton in the Sioux Falls Stampede. That organization has become one of the league's model franchises over the past decade. 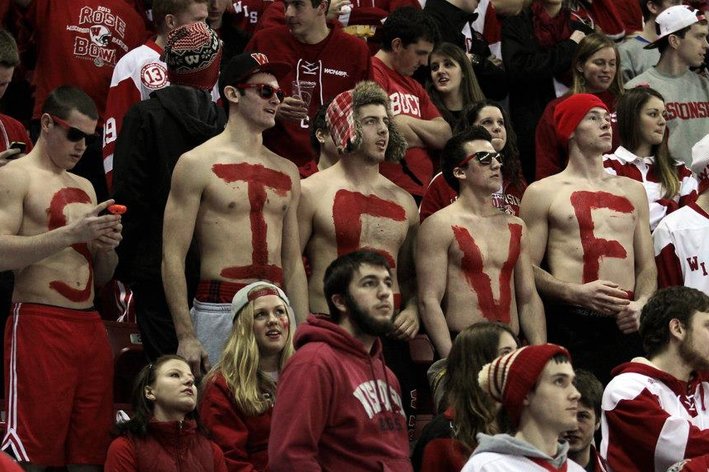 Wisconsin hockey attendance is already declining. Will that continue with the USHL bringing another team to Madison?

In addition to the Stampede, Schoenborn has also invested in the Sioux City Musketeers, as well as the Des Moines Buccaneers. Shoenborn has since sold his shares of the Musketeers and Buccaneers, but is still a co-owner in Sioux Falls, according to his bio on the Leonard, Street and Deinard Law Firm website.

In addition to his duties as a lawyer and USHL owner, Shoenborn doubles as legal council for the league in matters ranging from arena development and construction contracts to building leases, naming rights and food licensing deals.

Shoenborn, a St. Cloud, Minn., native, has also had a huge hand in local collegiate teams in Minnesota building new or renovated facilities. Shoenbrorn helped lead the charge for Bemidji's $49 million hockey facility that was built in 2011, as well as the $29 million renovation of St. Cloud's National Hockey Center.

Another intriguing name in the ownership group is Sioux Falls President and CEO Tom Garrity. In additon to his duties with the Stampede, Garrity is the founder and CEO of Quan Sports Marketing, LLC, a sports consulting firm specializing in leading sports franchises in the areas of revenue generation, expense and operations management. According to his bio, Quan's clients have included the NHL, NBA, WNBA, Minnesota Wild, Houston Aeros and the Phoenix Coyotes.

Ignoring the potential conflict of interest between his duties with Sioux Falls and Madison, Garrity is experienced in attendance growth, which is one of the biggest questions with the new USHL club.

Under Garrity's direction when he was with the Houston Aeros of the AHL, the team increased ticket sales in all five seasons and grew ticket sales by 25.3 percent overall during his time with the franchise.

The 8,000-seat Veterans Memorial Coliseum at the Alliant Energy Center will house the new USHL franchise, and that's a positive or a negative, depending on who you ask. The Coliseum hosted the Wisconsin Badgers' hockey program from 1967-98.

While the Coliseum holds a nostalgic feel for long-time supporters of Madison-area hockey, the arena is out of date, and is a flat-out dump compared to other facilities in the USHL.

While the Coliseum holds a nostalgic feel for long-time supporters of Madison-area hockey, the arena is out of date, and is a flat-out dump compared to other facilities in the USHL.

Coliseum officials pumped over $1 million into the facility in 2011, constructing a new scoreboard with video capabilities and completely refurbishing approximately 1,200 seats in the upper bowl seating area prior to 2012 with an additional 2,500 seats to be updated by 2014.

Even so, the arena is downtrodden and depressing compared to the cathedrals that are being built in the current era.

The Madison area isn't new to the USHL. In fact, the city hosted a USHL team called the Capitols until 1995. The new ownership group is hoping to improve on the business model that didn't work the first time around.

Or the second, or the third.

In the years after the Capitols folded, Madison tired to supplement hockey entertainment in Madison with professional hockey teams by the names of the Monsters and the Kodiaks. Neither team succeeded at the gate, and moved within a year or two of inception in both cases.

The lack of attendance in previous attempts with the USHL and professional franchises has been largely due to the success of the Badgers' hockey program. Wisconsin has led the NCAA in attendance in 38 of the past 44 seasons.

The modern era of the Wisconsin program started in 1963 at Hartmeyer Arena and went to the next level when the Dane County Coliseum was built in 1969.

The Badgers' run of attendance crowns started at the Coliseum in 1969, and carried through until the University of Minnesota built the 10,000-seat Mariucci Arena in 1993. The Gophers led the nation for five seasons before the Kohl Center opened in Madison in 1998. Wisconsin immediately reclaimed the honor and held the attendance crown for 14-straight seasons until this past year, when North Dakota claimed the top figure.

Wisconsin's drop in attendance over the Mike Eaves' era is one of the reasons some skeptics feel a USHL franchise won't survive in Madison. During Eaves' time at the helm of the Badgers' program, the team has gone from a record-high 14,430 attendance in 2006-07 to a Kohl Center-low 9,521 this past season.

In fact, the Badgers have suffered a decrease in attendance five of the past six seasons. The only increase (1.3 percent) came after Wisconsin's appearance in the 2010 Frozen Four (where they were blown out by Boston College in the title game).

Will the USHL be successful in Madison?

In a few simple words, I'm not sure. They are playing in a terrible venue and it's a market that has been traditionally dominated by the local college team. They are taking a huge risk entering the market, but at the same time, there could potentially be a huge reward. The biggest coup is that they've got an ownership group that is experienced in the USHL that will be able to guide them to financial success. That should not go overlooked.

I believe a lot of the people who are giving up Badgers tickets over the past few seasons will be willing to shell over money to a USHL team that will charge half the price of a Wisconsin ticket.

It's a fair point that the Madison market may be already saturated with hockey, but there's an underdeveloped group of people in the community who are willing to pay $10-15 a game to bring their families to see high-level hockey in southern Wisconsin.

How will it affect the Badgers?

This is probably the most important question, obviously, for a blog that covers Wisconsin hockey. On the surface, it's not an outstandingly positive development. Wisconsin hockey attendance has fallen in five of the past six seasons from an average of 14,133 in 2007-08 to 9,521 in 2012-13. Adding another hockey entertainment option isn't exactly what the school would be looking for in terms of generating interest in its program.

There's no doubt that a USHL franchise in Madison is going to initially draw some fans away from the Wisconsin hockey program. The USHL team will be able to offer ticket prices that are likely two-thirds, or half the price of an average Badgers' ticket. The USHL is also able to offer beer sales with general admission tickets, which the Badgers are only able to offer in Club and Suite sales.

Even with losing a few fans to the USHL team, the Badgers should be able to benefit from a partnership with a local USHL team. The most obvious advantage is exposing a team of USHL players to the Madison community. The Dane County area is beautiful, and having a team of Division 1-qualified hockey players in the area to experience the environment can't hurt.

There will also be a serious advantage for the coaching staff in terms of evaluating talent. The USHL is the top junior league in the United States, and currently only Omaha and Madison have Division I programs in both the USHL and Division I. That gives the Wisconsin staff additional opportunities to view not only players from the new Madison USHL franchise, but from all of their opponents as well.