Wisconsin will have a chance to rebound after being swept in Minnesota with a home series against Penn State.

MADISON -- A Michael Mersch turnover with less than 30 seconds left may have cost the Wisconsin men's hockey team a shot at taking down No. 1 Minnesota Saturday, but head coach Mike Eaves doesn't think it will take the senior long to get his head right.

"Michael Mersch is a senior, veteran player, [he] makes [a lot of better] plays than the ones that happened the other night," Eaves said at his weekly press conference. "Michael gets right back in the saddle. We're going to learn from it and throw it away and moving forward."

The No. 17 Badgers (4-5-1 overall, 0-2-0 Big Ten) won't have time to dwell on the loss, as they host Penn State this weekend -- the first time they have played back-to-back series since mid-October.

One of Wisconsin's biggest concerns of late has been between the pipes. Thought to be one of the team's strengths, the junior duo of Landon Peterson and Joel Rumpel has had its share of problems this fall.

5 things I think I think 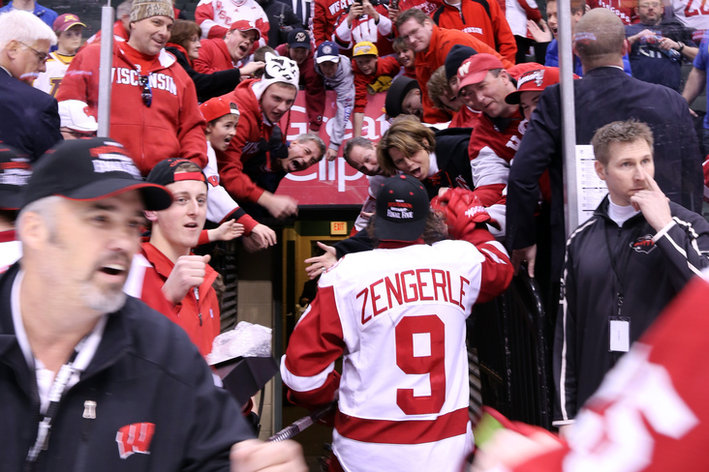 The sweep at the hands of top-ranked Minnesota hurts, but Andy Johnson says brighter times are ahead.

Rumpel has missed two series with an ankle injury and is still looking to get back to last season's form when he won 16 games and posted a 1.96 goals against average. Peterson, on the other hand, has been pressed into more action with Rumpel's absence, and has allowed 23 goals in seven games after allowing just 28 in 14 games last year.

"I think they've shown us they can be better and I think they need to get there," Eaves said. "Jeff Sanger, our volunteer coach who was a goalie coach, he gets a look at video, and he'll be out here the next couple of days. We'll continue to pound that area, but they need to show up as well."

One aspect of this Badger team that does bear a strong resemblance to last year is its poor start. How UW responds through the next few series, though, remains to be seen. A year ago, Wisconsin turned its 1-7-2 start into a WCHA title and an NCAA tournament berth, and Eaves says he thinks his players can do the same this year.

"I know they remember that, in talking to some of them today," he said when asked if his players think back to last season. "That will be there in our minds as we get ready to win. The best thing is we've got to find a way to get going here in the Big Ten and find ways to get a couple wins."

The Badgers will have a good chance to turn things around this weekend against a Nittany Lion team (3-7-1, 0-0-0) that has dropped four straight and seven of its last 10.

Penn State is coming off consecutive sweeps at the hands of No. 7 UMass-Lowell and No. 11 Union, but has already found some success in the Kohl Center in its short history.

In February, the Nittany Lions stole the second game of their series with the Badgers in Madison in front of just 9,078 fans, providing Wisconsin with one of its few blemishes in the second half of its season.

Eaves is expecting a better atmosphere this time around.

"I'm hoping it will be really exciting, I know our kids are excited," he said. "The Big Ten is here. We've got an opponent that a lot of our kids will know from football and basketball, but now [they play] hockey. I hope that draws them out, and we'll have a packed building as well."