Former Wisconsin Badger Davis Drewiske was part of a ceremony Saturday afternoon to honor the 2012 Stanley Cup Champion Los Angeles Kings. Drewiske has been a member of the Kings since the 2008-09 season.

The former Badger captain was part of the remarkable run last season by L.A. Despite finishing 8th in the Western Conference, the Kings went on to defeat the New Jersey Devils in six games to clinch the cup.

Drewiske is a long-time winner. The Hudson, Wis. native won a high school state championship with the Hudson Raiders, an NCAA title at Wisconsin, and now a Stanley Cup with the Kings.

Here is a screen shot from NBC of Davis recieving his Stanley Cup ring on Saturday. 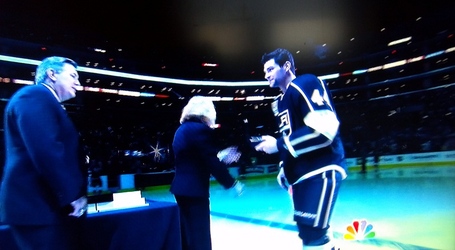