Friday night during Wisconsin and Michigan Tech's 1-1 tie, Tech freshman Jujhar Khaira was whistled for holding with 4:09 left to play in the third period. Wisconsin's Tyler Barnes would go on to score on the man advantage to tie things up at one.

While Khaira was certainly deserving of a penalty, the refs should have penalized him for a five minute major and ejected him from the contest. Video reviews clearly showed Khaira grabbing UW sophomore defenseman Jake McCabe from behind by the facemask and dropping him to the ice like it was a WWE wrestling match.

McCabe was visibly shaken up after the play, and the egregious act was deserving of more than two minutes.

In the post game press conference Mike Eaves was clearly upset with the calls--or lack there of--especially in regards to the Khaira play.

"We can't go down that path as far as the refereeing," Eaves said. "But I did ask them to watch the video and get back to us about some of the things they didn't call. There was--never-mind, I can't get into it."

We haven't been able to find any video of the play yet, but here are a few still shots courtesy of @cjzero. 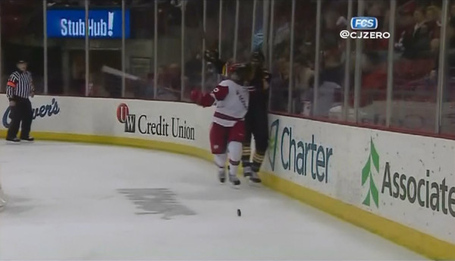 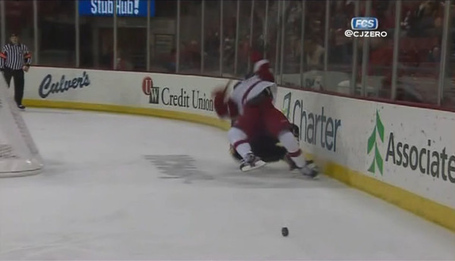