Wisconsin opens against UAB, with the winner meeting the Florida-Georgetown winner on one side of a stacked holiday bracket.

Wisconsin will meet UAB for the first time ever to jump start the 2014 Battle 4 Atlantis tournament, at 6 p.m. on Nov. 26. The tournament spans the Thanksgiving holiday, Nov. 26-28, on Paradise Island in the Bahamas. The Badgers would face the winner of the Florida-Georgetown game if they advance past the Blazers.

On the other side of the bracket are first-round matchups UCLA-Oklahoma and North Carolina-Butler, as revealed by ESPN on Tuesday.

Each team in the tournament is guaranteed to play three games. Television coverage for the Battle 4 Atlantis is split between ESPN, ESPN2, and AXS TV. The Wisconsin-UAB game will be shown on AXS TV.battle4atlantis

By pairing Wisconsin with UAB on the same side of the bracket as Florida, it is appears the event organizers are angling for a potential second-round game between two of last year's Final Four participants. The young Blazers lost five seniors from last year's 18-13 team. Meanwhile, the Badgers have to be considered one of the tournament's favorites, returning nearly every important piece from their 30-8 squad.

Early-season tournaments are very much en vogue in college basketball these days, but this will be UW's highest-profile affair yet. Last year, the Badgers beat West Virginia to win the Cancun Challenge, and they played in the Las Vegas and Chicago Invitationals in the two previous seasons. Wisconsin went 2-1 in both the Old Spice Classic and Maui Invitational prior to that.

Here is the complete tournament bracket in detail: 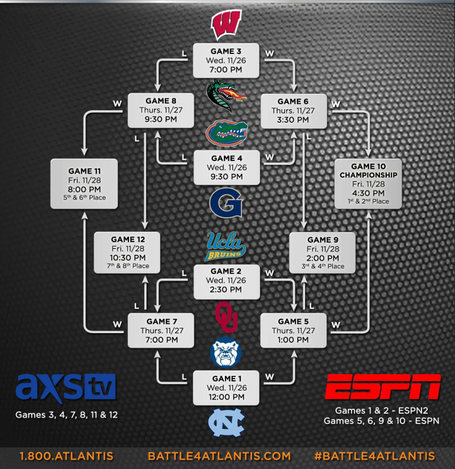