The rich get richer.

It's Friday, which means no Big Ten games. That gives us a moment to exhale and see where things stand from an adjusted efficiency perspective -- and, really, is there any other perspective worth taking?

A reminder on how these adjusted efficiency margins are calculated:

Ladies and gentlemen, the Friday Facts.

-- Compared to last week, the biggest moves are: Wisconsin (up .04 with two very nice wins), Ohio State (also up .04 after two big wins over bottom-feeders) and Nebraska (up .03 with huge wins over Michigan State and Penn St.). Several teams took a large step back: Minnesota, Indiana, Penn State and Northwestern all dropped .03. Could the Big Ten be sorting itself out, at long last?

-- As balanced as the Big Ten is, the Friday Facts confirm that there is a huge chasm between the top five and the bottom seven. No team has been truly spectacular, and no team has been truly awful, but the top five teams are all well above average and the No. 6 team, Nebraska, is significantly below average. In terms of raw efficiency, the gap between the leaders (Iowa and Michigan State) at .13 and the No. 5 team (Ohio State) at .06 is less than the gap between fifth and sixth (Minnesota). This pattern is even starker in the adjusted efficiency margins.

-- That brings us to the bubble. The Big Ten's top five teams are locks for the NCAA tournament at this point, and only Nebraska and Minnesota have any shot of getting an at-large berth. According to various bracketologists, both are right on the bubble. My personal preference, from a league reputation perspective, would be for the bubble teams to falter down the stretch and leave the Big Ten with five really solid teams in the tournament. It's not a stretch to think that all five would make the Sweet 16, leaving the Big Ten 10-0 after the first week of play. True, that's not so much different than 10-1 or 10-2 if Nebraska and/or Minnesota get in, but 10-0 has a certain beauty to it. So that's what I'm rooting for. But I know others root for more Big Ten teams to get in. Thoughts?

-- I think Iowa lucked out by not having to play Indiana this week. Indiana is due for a nice home win after some terrible losses last week, and Iowa is a bit due for a comeuppance. Now the "due gauges" have all been mixed up, so the universe is out of whack and no one knows what will happen. Not even me.

Following up on last week's report on Big Ten scoring, here is an updated chart of points-per-possession in league play: 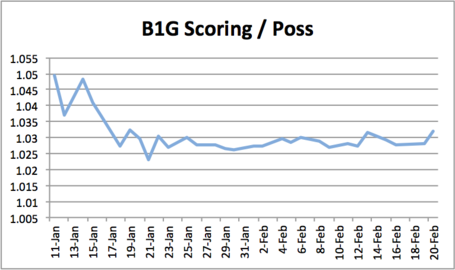 It's actually possible to discern a bit of an upward trend since the end of January, and overall scoring is as high as it as been since the late-January crash. Indeed, a look at the moving 10-game average shows that scoring recently has been downright nuts: 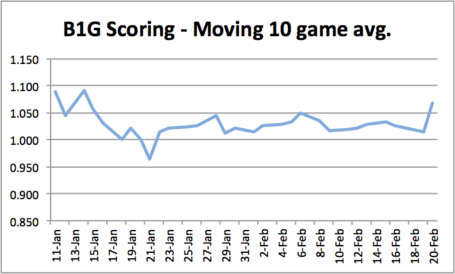 As you can see, scoring over the last 10 games has reached levels not seen since the early-season buzz wore off. Will this continue? Tune in next week.

[Edit: Because of a spreadsheet error, that final jump is actually the average for the last nine games. But still.]

It's been well reported that Big Ten teams are losing at home at an unusual rate. Currently, the home team is just 44-36 (55 percent) in league play. If Big Ten home teams don't step it up, they will finish with the lowest home winning percentage since at least 1980 (which is when I got tired of calculating this). Here's the chart of Big Ten home winning percentages since 1980: 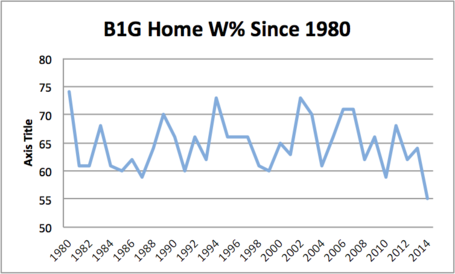 No real pattern here, but 2014 sticks out like a stock market crash. Note that Big Ten home teams have won less than 60 percent of their games only twice since 1980. Unless there's a big rally, looks like this year will make thrice.