Bart Torvik brings his Friday Facts to B5Q. His efficiency margins take into account opponent and venue, providing a deeper look into the conference's quality teams.

Unsurprisingly, the raw and adjusted efficiency margins are converging as the vagaries of scheduling even out. Still, some things jump out:

--The top three (Michigan State, Iowa and Michigan) remain a clear-cut above Wisconsin and Ohio state, and they are in a dead heat for the coveted Friday Facts Award, given annually since 2014 to the Big Ten team with the highest adjusted efficiency margin in conference play.

--Although Minnesota and Indiana are tied in raw efficiency margins, Minnesota is clearly better and the adjusted EMs show that.

--Nebraska, Purdue and Penn State are essentially tied in raw EM, but the adjusted margins give Nebraska credit for its tougher schedule (for example, its one-point loss to Michigan is a positive in the adjusted EM, but negative in raw EM) and reflects the reality that the Huskers are clearly the best team of the bunch so far. It will be interesting to see what Nebraska does the rest of the season, as it has the easiest venue-adjusted strength of schedule remaining. In fact, going into last week, Nebraska had played the toughest schedule in Big Ten play, but by the end of the year it will probably end up with the weakest strength of schedule. That's how weak the Huskers' remaining schedule is.

--Finally, the Friday Facts reveal that the Fight for Fourth (between Wisconsin and Ohio State) is shaping up to be a doozy. OSU has the schedule advantage, but if Wisconsin can manage to steal a win at Iowa or Michigan, the Badgers will gain a clear advantage as their last four games are all very winnable.

Scoring in the Big Ten

Something else I've been following is scoring efficiency in the Big Ten. I pointed out last week that, despite the much-vaunted "new rules," scoring per 100 possessions in Big Ten play was at 102.8, just below the average from the previous 11 seasons (102.9). I hypothesized that the new rules had gone into hibernation for conference play.

I wanted to see if a downward pattern could be detected, which would buttress the notion that any effect of the new rules was declining. And, sure enough, I found that through Jan. 11 (the first 19 games of Big Ten play) scoring had peaked at 1.05 PPP, and had steadily declined until reaching a fairly stable equilibrium at around 102.6 per 100: 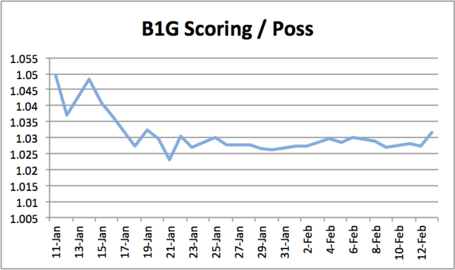 You'll probably notice that little jump at the end. That's the effect of last night's games (Wisconsin vs. Minnesota and Michigan State vs. Northwestern), both of which were high-scoring affairs (from an efficiency perspective), with all four teams coming in over one point-per-possession. Have we reached a turning point? Or was this a blip? I'm guessing the latter, but we shall see.

Next Up In Men's College Basketball