Will the Badgers get to No. 1?

Wisconsin's already won its first 14 games. With Big Ten play unfolding, how long can it remain undefeated -- and how high can it climb in the polls?

Share All sharing options for: Will the Badgers get to No. 1?

Wisconsin is currently ranked fourth in the AP Top 25, behind three other unbeaten teams: Arizona, Syracuse and Ohio State. If these other teams lose all before Wisconsin, it's very likely the Badgers would ascend to No. 1. So what are the chances of that?

To find out, I ran 10,000 simulations of the rest of the season for each of these four teams using KenPom win probabilities. The result is that the Badgers were the last of these teams to be unbeaten at the end of the week about 18 percent of the time. So, overall, there's about a 1-in-6 chance the Badgers get to No. 1 as an unbeaten team.

The next question considers how many more undefeated weeks the Badgers would have to string together for it to be likely that they'd ascend to No. 1. The results of that investigation are shown in the following chart:

The second numeric column is straightforward; it shows the chances the Badgers will actually still be undefeated after a given week's play.

The final column shows the odds of the Badgers actually being No. 1 at the end of any given week, assuming they are still unbeaten. In other words, this is the chance the Badgers are still undefeated and each of Syracuse, Arizona and Ohio State have each lost at least one game.

Breaking down the remaining unbeatens 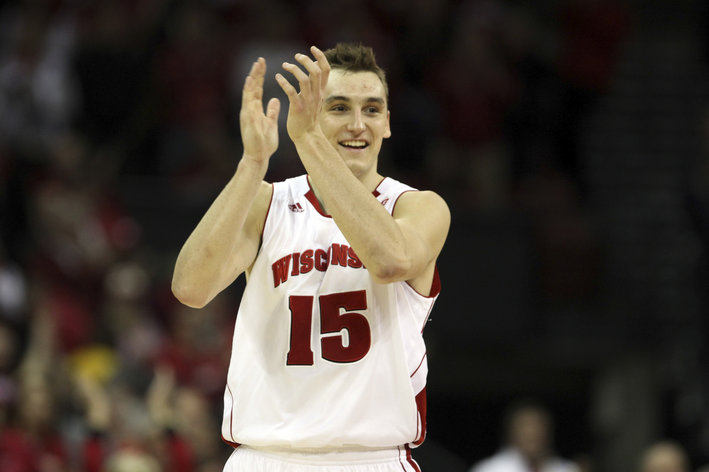 The Badgers are the second-most surprising -- and impressive -- unbeaten team.

Remarkably, the Badgers would have to win another six games in a row to be "likely" to get to No. 1, and another eight games to be likely to be No. 1. The big obstacle is that Arizona is very good and has a very manageable schedule; the Wildcats will probably be favored to win every game they play in the PAC-12, and they don't play their toughest game (at Oregon) until March. The best chance for an early upset is next Thursday, when Arizona plays at UCLA.

Syracuse also has a favorable start to its inaugural season in the ACC. The Orange don't have a particularly tough road game until they play at Pitt Feb. 12. They do have a couple of tough home games coming up, though: North Carolina Jan. 12, and Pitt Jan. 18.

Ohio State, on the other hand, has to travel to Michigan State on Tuesday, where it is likely to suffer its first loss.

All told, the most likely scenario for the Badgers getting to No. 1 unbeaten is to beat Iowa and Illinois, and hope that UCLA upsets Arizona, North Carolina upsets Syracuse and Michigan State beats Ohio State.

Of course, there are many other possible scenarios where the Badgers lose a game but eventually get to No. 1. Back in 2007, when they spent that one glorious week atop the charts, they had already lost twice.