Wisconsin's former big man went undrafted in Thursday night's NBA Draft, but he'll nevertheless get his shot in The Association.

If Jared Berggren were drafted in Thursday night's NBA Draft, it would've been a considerable surprise. But as a 6-foot-10 big man with a silky jumper, fantastic mobility and true shot-blocking instincts, who would be surprised if he did find a way into the league? On Friday, he drew one step closer to making that happen by signing with the Orlando Magic.

Congrats to @JBerggren40 on signing with the @Orlando_Magic. The #NBA Journey begins... 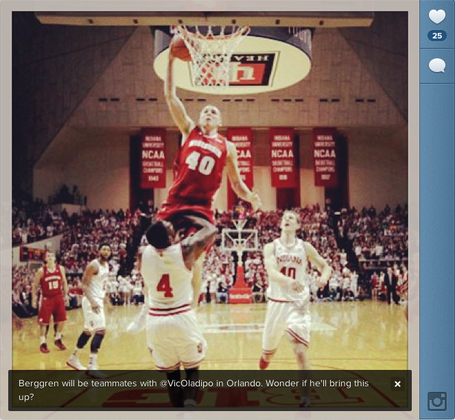 Great stuff. Orlando currently has two players on its roster who can play center in 7-footer Nikola Vucevic and 6-foot-9, 289-pound (!) Glen Davis. Kyle O'Quinn, a 6-foot-10, 240-pound forward who just wrapped up his rookie season, can also play center. It remains to be seen what's next for Berggren, though you can imagine Summer League is in his future.

Berggren ended his college career on a high note in 2012-13, setting career highs in points (11.0), rebounds (6.9) and blocks (2.1) per game. He was a consensus second-team All-Big Ten honoree and was named to the conference's All-Defensive team, and for the second year in a row played in every one of Wisconsin's games.