The Badgers' junior guard is healthy and raring to go after a knee injury cost him last year.

Wisconsin spent most of Wednesday evening's practice at the Kohl Center running full court and working on late-game situations. Thursday afternoon, the Badgers leave for Sioux Falls, S.D., ahead of Friday's season-opening tilt against St. John's.

UW is on the road, yes, but it won't have to travel as far as the Red Storm (16-17, 8-10 Big East last year), who will be departing from New York City to open their season in the plains at the brand-new Sanford Pentagon, home of the NBA Development League's Sioux Falls Skyforce.

Here are some notes from practice:

After a productive exhibition showing against the University of Wisconsin-Platteville, redshirt junior guard Josh Gasser (seven points, three assists) had bounce in his step Wednesday. Gasser, who tore his ACL on the eve of the regular season a year ago, certainly looks confident in his knee and his game.

"It's just real little things at this point," Gasser said. "I know physically I'm able to get out there and run around and shoot and do all that stuff. It's just a confidence level I need to get to. It's improving weekly, my aggression picks up and I move my feet a little better." 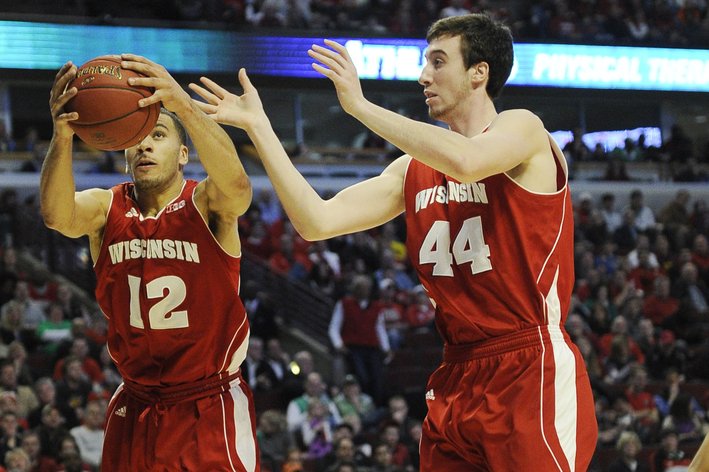 Will we see a faster pace with one of Bo Ryan's youngest squads?

Gasser, who played the two-guard extensively in his first two years before the injury, will start on the wing as the "three," along with guards Traevon Jackson and Ben Brust, and forward Sam Dekker and center Frank Kaminsky.

Dekker said he played the four at times last year, but expects he'll see more time there this year, depending on the lineup combinations. Whether UW is big enough to handle the physicality of the Big Ten will be a key question this year, but Dekker also sees the possibility for potential matchup problems going the other way.

"I'm comfortable with it, he said. "I feel like I can find people that way and I can also score that way."

All hands on the glass

The Badgers will need to replace the rebounding proficiency of departed frontcourt members Mike Bruesewitz, Ryan Evans and Jared Berggren, who combined to average 19.5 boards per game.

Some help must come from freshman forwards Nigel Hayes and Vitto Brown, but Wisconsin's guards will also have to chip in. Ryan has developed guards unafraid of playing down low and rebounding, and Brust and Gasser are among them.

"We might not be the biggest team this year, but we've got a lot of fight and if we have that we're going to be able to win the rebounding battle," Dekker said.

"I think rebounding is going to be what makes or breaks us at times, Gasser said. "For us guards, me, Trae and Ben have been talking about how we have to rebound the ball better. We need to get in there, mix it up a little bit and. Collectively, we need to pick up that slack."