Adidas strikes again: the Badgers and Huskers will be unveiling a new "Bleed Out" uniforms this weekend.

Before you jump for the caps lock/rant button, take notice: the latest adidas jerseys aren't so bad.

Similar to this year's NBA Christmas Day jerseys, the "Bleed Out" jerseys have Wisconsin and Nebraska once again wearing souped-up alternate uniforms. They, are however, significantly milder than "The Quick and the Red" football editions from September. Both teams will sport the uniforms in their two match-ups this season, beginning with this Sunday's tilt in Lincoln, Neb. The second contest comes Feb. 26 at the Kohl Center

From the UWBadgers.com press release:

Similar to the adidas jerseys worn by NBA teams on Christmas day, both team's uniforms on Sunday will feature a solid color blocking of team logos, word marks and numbers with minimal accent color and shimmer finish for a bold on-court look. UW's uniform will be completely white uniform with white lettering and numbers accented by red trim. The Huskers will wear a red-on-red variation. 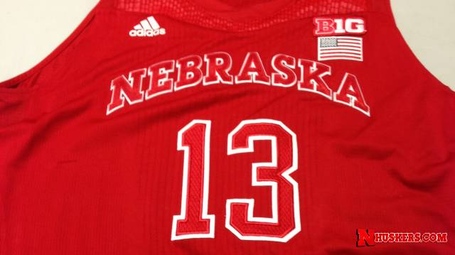