Wisconsin depth chart 2014: A post-spring look at the Badgers' offense

A look at which Badgers may have moved themselves up (or down) Wisconsin's early 2014 depth chart.

Share All sharing options for: Wisconsin depth chart 2014: A post-spring look at the Badgers' offense

It's been two weeks since Wisconsin spring football has concluded. Though fans are looking for answers from a month's worth of practices, the real answers won't come until the Badgers put on the pads in Houston on Aug. 30. With an abundance of injuries seen in multiple positions (disclaimer), the spring provided some much-needed reps for younger players. So, where could certain players stand at their respective positions? B5Q's Luke Mueller and I give our thoughts below.

Note: Luke created the depth charts below as he witnessed many more practices than I did over the course of the spring. You'll see our discussion and breakdowns thereafter. 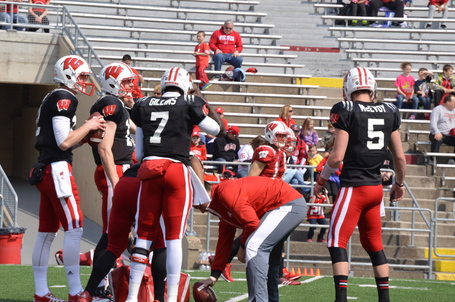 Jake Kocorowski (JK): Near the end of spring practice, head coach Gary Andersen said Joel Stave and Tanner McEvoy will be competing for the starting quarterback job into the fall. When I saw McEvoy in the first week of last year's summer camp, tell there was some tentativeness in McEvoy as he learned offensive coordinator Andy Ludwig's offense. Now that he's had some spring practices under his belt following the switch back from safety, he looks more comfortable in the huddle. How much progress have you seen from McEvoy?

Luke Mueller (LM): McEvoy has shown poise and composure this spring. He looks extremely comfortable controlling the offense. He has made the right reads, checked down when necessary and has controlled the line of scrimmage through audibles. He has shown an understanding of the offense and is the style of quarterback Ludwig and crew would like to run their offense. If he keeps this improvement going, don't be surprised to see No. 5 under center in Houston. In order to do that, though, he must be more accurate and form a relationship with the wide receiving group that was battered this spring.

JK: Stave and McEvoy, both listed as No. 1, have their strengths and weaknesses. Stave has more starting experience, along with the arm strength and I would say more accuracy (may I also note his third year in a row of competing for the starting job). McEvoy obviously has his dual-threat nature, but he also showed off his arm at times during the spring game. Depending upon the progression of a young receiving corp with five new freshman coming in, it seems McEvoy's running ability, especially scrambling and in the zone-read looks, may be the X-factor when looking at this race. Based on your experiences during spring football, how big of a threat is McEvoy to Stave's job?

LM: McEvoy is a huge threat because he has an element that Stave doesn't: escapability. McEvoy won't give you Russell Wilson elusiveness (You may have to wait for Gillins to mature or for Austin Kafentzis to see that), but he is not afraid to use his legs to turn a negative into a positive. Neither was great in spring, as Stave saw limited time and throws, but I think McEvoy's added reps with the first team are invaluable experience that he gained this spring.

JK: Heading down your list after Stave and McEvoy, you have true freshman D.J. Gillins in front of Bart Houston. Houston admitted he slumped in the middle of spring football after trying to make too many plays on his own, but do you feel Gillins and his own dual-threat nature propels him above Houston here? As of now, I still feel like I would have Houston as No. 3 due to this being his second year in the system.

LM: Personally, I think that Gillins will redshirt this year, but based on what I have seen this spring, Houston tried to do too much, and was still perplexed by the offense at times. He was even pulled for two snaps during the first outdoor practice and Gillins replaced him as the coaches talked things over with Houston before he returned to his routine rep cycle. For that reason, I have Gillins at No. 3, but like I said, I believe Gillins will redshirt, making Houston the third quarterback. 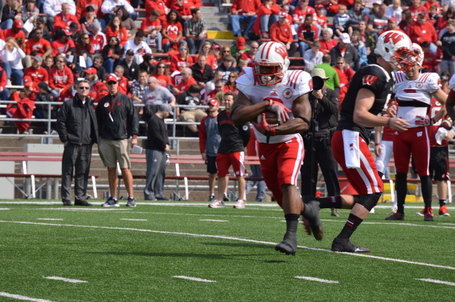 JK: Obviously this is one of the strengths of this team heading into summer conditioning and camp. You have a possible Heisman Trophy contender in Melvin Gordon, a battering ram in Corey Clement and a two-year starter in Derek Watt helping to open up holes. Though Gordon and Clement didn't get any "live" carries during the second half of the scrimmage, the fact that redshirt freshman Austin Ramesh received some at an almost 6-yards-per-carry clip is a welcomed sign.

LM: Ramesh really impressed me throughout the spring. The kid always finds a way to fall forward for positive yardage. It will be interesting to see how the staff uses him this year. Andersen has made mention of Watt playing the "U back" position, which is the equivalent of a slot receiver of sorts. Ramesh was listed as a fullback last season, so if there is a set where the "U back" is utilized and there is a fullback in as well, don't be surprised to see Ramesh (this hypothetical package with Ramesh and Watt never occurred in spring). To play tailback, Ramesh will have to get faster, but his rushing instincts are well beyond where you would expect them to be.

Some flashes early on by Wisconsin's potential starters gave way to a more defensive-minded second half.

Over a month of spring practices, Wisconsin's defense has shown that it might look a tad different from last year.

JK: This spring, there weren't many reps received by the Badgers' receivers expecting to compete for starting spots in the fall. Injuries struck Jordan Fredrick and Robert Wheelwright, while Alex Erickson was also limited due to the knee injury he sustained in the Capital One Bowl. Erickson, who was awarded a scholarship earlier this month, will be competing for one of the starting receiving positions (or is favored to win one of those spots, in my opinion), based on his work last season. However, players like Kenzel Doe, Jazz Peavy and Reggie Love (who redshirted last season) benefited from those added reps. Who helped themselves this spring?

LM: Kenzel Doe solidified himself as the top dog in this group this spring with Fredrick and Wheelwright missing most of the spring. He was able to take all first-team reps and be the lead receiver the whole spring. He also took second- and third-string reps because the Badgers had no receivers. He received more reps than anyone on the team other than maybe Michael Deiter this spring. The two who saw the most benefit, though, have to be Jazz Peavy and Lance Baretz, simply because they both received reps they typically wouldn't with the whole crew healthy.

JK: In your opinion, how much will the Badgers need to rely on the five incoming receiving recruits?

LM: Chris Beatty said it best when he said the Badgers don't recruit anyone to redshirt. This year, that will ring true with the wide receivers. I think the Nos. 2, 3 and 4 wide receivers could be freshmen. Other than Doe and Fredrick (if he's 100 percent healthy), nobody has solid experience and even those two returners have limited experience. I would venture to say the staff is almost expecting those freshmen to step up right away this season. 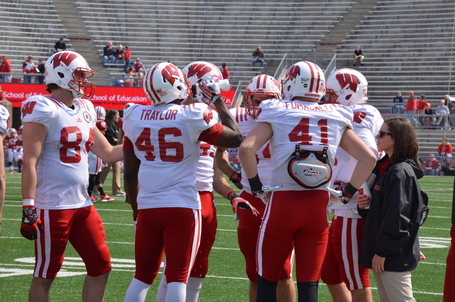 Note: Watt worked as a U-Back this spring.

JK: Definitely agree with your assessment of Arneson and Traylor as the top two. You saw those two take reps in a bunch of two-tight end sets in the spring game. I'm intrigued by your thoughts on Fumagalli. He's a redshirt freshman, but what in your opinion has he done to jump over Eric Steffes and Austin Maly?

LM: First off, Traylor is a big-bodied player who I think will find success this year. As for Fumagalli, he is your typical Wisconsin tight end that we are used to. He works hard, has soft hands, blocks well and can eat space with his size. He is not afraid to get down and dirty, which will be great in run settings. One thing I like about him is you never really noticed him this spring, which is a good thing for a tight end. It means he was doing the little things right and was not missing blocks and being called out by coaches.

JK: Another position where injuries took out some starters, but with Dan Voltz and Dallas Lewallen resting, Deiter and Ray Ball received some solid reps at center and left guard, respectively. How did the spring pan out for not just for those two players but also other linemen looking to gain more experience?

LM: The first-team offensive line looked strong as always. That unit returns more experienced and as large as ever. Deiter was extremely impressive this spring. For an early enrollee, he gained experience most don't get this early in their careers. I don't think he will challenge Voltz for a spot this year, but I do believe down the road he will, or the staff will have to shuffle one of the two to make room. As you mentioned, the line was depleted with even Rob Havenstein being held out of the latter part of spring. The good thing is because their offensive line is experienced, this spring is not as crucial for. It allowed younger players to gain valuable reps and run with some units they typically would not have. Overall, there should be nothing to worry about for this veteran group.