Our look at Wisconsin's walk-on tradition continues with another set of brothers. Ethan and Thad Armstrong both bleed cardinal and white, though their family history shows they broke from a Hawkeye heritage.

In high school sports, student-athletes often have opportunities to play alongside their siblings. The odds are not as favorable in college, though, as programs face limited roster spots and increased scrutiny in talent evaluations.

Wisconsin, however, is a special case this season in making a portion of the team a family affair. Within the Badgers' 105-man roster, there are five sets of brothers, including the Biegels (Vince and Hayden), the Trotters (Marcus and Michael)and the Watts (Derek and T.J.).

The two other families, the Armstrongs and the Hemers, share an uncommon bond. Both pairs of sons, Ethan and Thaddeus Armstrong, and Ethan and Ben Hemer, started their careers as walk-ons. The Hemers and the Armstrongs each have their own stories of their paths to Madison, but their journeys have left marks not just on the program that started with both older brothers contributing on back-to-back-to-back Rose Bowl teams, but also on their families.

The Armstrongs hail from Ottawa, a small city in Illinois with a population of under 20,000. Located southwest of Chicago, the city is the birthplace of Hollywood writer and director Terrence Mallick and former WWE wrestler Maria Kanellis.

A look at their family tree yields a long chain of relatives inked in black and gold, as the family holds three generations of University of Iowa graduates, from their grandfather and his siblings to their older sister, who double-majored in finance and marketing from Iowa City.

Ethan, the elder Armstrong son, began his path to Madison upon receiving a recruitment letter from Wisconsin during his high school days. According to his father, Brad, who works as a registered investment advisor and certified financial planner, Ethan wasn't highly recruited coming from a smaller city, although Ottawa does boast former NFL tight end Aaron Shea as one of its natives.

Armstrong went to a few football camps, including one at his parents' alma mater, but decided to give Wisconsin's camp a try after receiving that letter. He went one year, and as his father stated, he went back again the next. He gained the interest of then-defensive coordinator and linebackers coach Dave Doeren (now the head coach at N.C. State) and then-assistant coach Randall McCray.

Ethan received interest from a couple of Mid-American Conference schools, including a scholarship offer from Ball State, along with opportunities to walk-on at Iowa and Illinois once school started in the fall. That didn't appeal to Armstrong as much. Doeren and McCray visited his family, sent letters and followed up often.

Doeren was honest with Ethan, confirming Wisconsin could only offer him a preferred walk-on position at the time-o But coming to Madison would give him the opportunity to compete right away in camp before school started. That helped sell Ethan on making the nearly 150-mile trek north across state borders for his college career.

"He also said that 'you'll get your fair chance. I just can't tell you when that's going to be,'" Armstrong said.

"‘You'll be treated like the rest of the players, it's just that the scholarship guys will kind of get their opportunity first. That's just kind of the way things are, but you will get your opportunity, so be ready for it.'"

The family discussed its options and weighed Ethan's, but ultimately left the decision to him.

"We could tell his heart and desire was to go to Wisconsin." -Brad Armstrong on Ethan

"We could tell his heart and desire was to go to Wisconsin," Brad said.

With no scholarship to pay the tuition bills and no guarantee one would be granted during his playing days, Ethan and his family had to brace for the impact of paying for school in some fashion, something each college student not granted financial scholarships or grants has to account for. The Armstrongs' situation, though, included accounting for out-of-state tuition costs. Illinois does not have a reciprocity agreement with Wisconsin to allow tuition comparable to in-state costs, unlike Wisconsin's neighbor to the west in Minnesota.

As of August 2013, the tuition cost for a non-resident of Wisconsin to attend the university was $26,652 per year, compared to $10,402 for in-state students, not including living expenses, books and food. Brad and Carla did set aside some funds for their children to go to school, as they did not assume athletics would play a role in their post-secondary education.

"They kind of set aside some money and said, ‘You can go to college and we want to make sure that we pay for that,'" Ethan said.

"Obviously, paying out-of-state tuition here is not cheap at all, and it was kind of a financial burden on them, but I was lucky enough that after three years, I was able to get put on scholarship, so that was definitely a blessing."

When Brad and their mother, Carla, received word of Ethan being put on scholarship in the fall of 2012, their first reactions were of excitement and pride that their son received this special recognition from then-head coach Bret Bielema and the Wisconsin coaching staff based on his athletic ability and his hard work paying off.

"It wasn't so much, ‘what a relief it is that we don't have to pay for it,'" said Carla, a homemaker.

"It was he earned the respect from the coaches and his teammates and the organization." 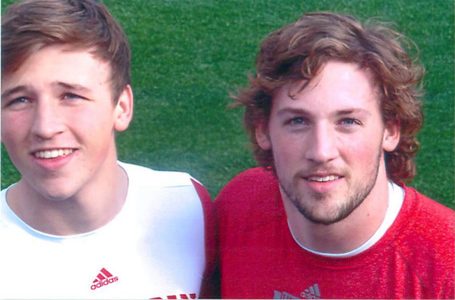 The recruiting process for the younger Armstrong ended with the same result as his older brother's, but the road to Madison unfolded differently. Thad, now a back-up quarterback for the Badgers, at first garnered slightly more attention in high school than Ethan. According to Brad, Thad started to spark some interest from Illinois State, Iowa, Vanderbilt and Wisconsin after partaking in camps the summer before his sophomore year. Though he didn't receive many scholarship offers, he decided he wanted to try a bigger school and go to the best program that wanted him.

Like Ethan, Thad was impressed by the honesty the coaches had in discussing their commitment to the program and its at-times challenging schedule. He talked with Ethan about the experiences as a walk-on, which along with their close relationship, ultimately led to him following in his brother's footsteps as a member of the 2012 Wisconsin recruiting class.

"He had a huge role, because I mean, I saw what he did when he came here and all the success he had," Thad said. "So it was good to talk to him and see what he had been through so I could hopefully follow in his footsteps."

"We've always been really close in our relationship," Ethan added, "and I think that it meant he knew how much it meant to me to have him come here, and also it meant a lot to him to be able to come here and be on the same football team and share these two years together."

It also allowed the parents to watch both of their sons together on the same team.

"Yeah, that was obviously a big thing for them to have us both at the same school," Ethan said.

"They didn't have to split their time going to two different places during a busy football season, so I think that kind of helped."

The brothers are now roommates, and Thad credits his older brother with leading him in the right direction and offering advice both on and off the field.

"You know, he's been great," Thaddeus said. "Like if I get homesick, he's easy to be there to talk to me about it, so it was great as a freshman, and now it's gotten even better with all the help on the field."

The Armstrongs cherish the bond they've formed with other parents of Wisconsin players throughout the years. Most parents sit together in the same sections of stadiums, but not in the same seating, allowing for the moms and dads to fraternize and develop friendships.

"When you get to know everybody and see everybody, and you stay at the same hotels and get to hang out, that's been great," Brad said.

One memory does stand out for the patriarch of the Armstrong family among the many he's gained in his times watching his sons play, as they've traveled to Pasadena for three straight Rose Bowls and try to make it to every one of their sons' games.

"I guess, just for me, to see the two boys on the sidelines talking together after Ethan comes off the field, and see them either smiling or getting in each other's faces has been great," he said. 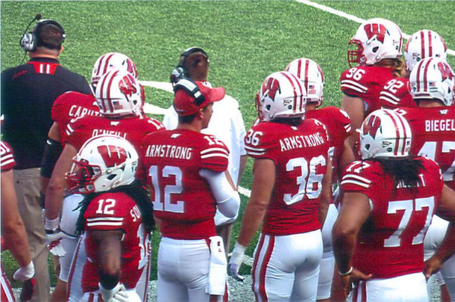 The family has changed its colors and allegiances from black and gold to cardinal and white. Ethan and Thad's older sister, Taylor, after graduating from Iowa, began taking classes at Wisconsin for fashion design and is working to start her own clothing line. Carla, who is helping their daughter in the process, takes great pride in their sons' Badgers careers and being a part of the Wisconsin football family.

"They'll always be my team now, from here on out."