It's amazing how one missed quarterback slide can change everything.

When Joel Stave took off running and South Carolina cornerback Victor Hampton crushed his right shoulder like a car running into a brick wall, you knew the remainder of the game would be an uphill battle -- even though Wisconsin trailed by just three points. It felt like it was over before it was actually over, once Curt Phillips secured a 34-24 Capital One Bowl victory for South Carolina and a fourth straight bowl loss for the Badgers

A steady first half careened into a sloppy third quarter and then a disastrous fourth, and in the end fans were left with that familiar sense of emptiness on New Year's Day. I rewatched the tape so you didn't have to, and here's the report card.

Just when you thought the Badgers were severely underachieving with Stave under center, Phillips makes him look like Bart Starr.

Finale once again unkind to Wisconsin 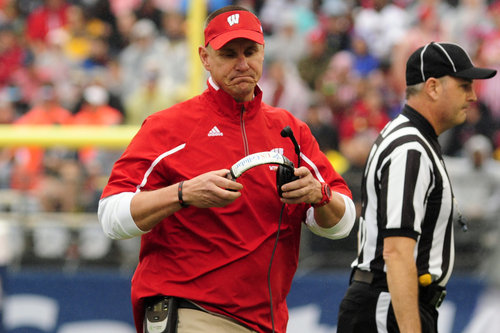 Let's start with the good: Stave maintained his composure against one of the better defensive lines in the country, as shown on the second-quarter pass to Jeff Duckworth with a 6-foot-6 manchild in his grill. He was serviceable for almost three full quarters, finishing 9-of-13 for 80 yards and, of course, the interception he threw after attempting to throw away the ball but having it bounce off his lineman's foot and into in the hands of Gamecocks linebacker Skai Moore.

Phillips was... how do I put this delicately? Terrible. I grew uneasy when the cameras turned to the sixth-year senior with helmet on and football in hands, the broadcasters pitching a storyline about what a great way this would be for him to finish his career. Phillips preceded to throw two picks in less than two minutes.

His first interception smacked off Jadeveon Clowney's helmet and the second came staring down three South Carolina defensive backs. The only open passing lane to Jacob Pedersen was high and on the far outside, and that's just not a throw Phillips can pull off.

Melvin Gordon, James White and Corey Clement combined for 282 yards against a D-line featuring Clowney and the severely underrated Kelcy Quarles. The Gamecocks stacked the box once Phillips entered and White and MGIII still found room.

Gordon picked apart Carolina in the first quarter and finished with a game-high 143 rushing yards. But White was the more efficient back, his consecutive runs for 14 and 32 yards showcasing his sharp vision and cuts, a microcosm of what made him such a successful college player.

Gordon, however, fell inches short on 3rd-and-1 and got nowhere on a crucial fourth down, though he never had a chance on the latter. Still, an admirable effort from White and co. as UW struggled to so much as threaten through the air.

Again, Wisconsin's passing game never found its groove and thus the receivers didn't have a fair chance to shine. Jared Abbrederis closed his career with a relatively quiet five catches for 30 yards while Duckworth snuck into the right corner of the end zone for the Badgers' second score.

There were no drive-stalling drops or other major mishaps. But no receiver had a catch for more than 11 yards on a pedestrian day for the group.

The Gamecocks boast the second-best rushing defense in the SEC, but Wisconsin's O-line made it look relatively average. Clowney was a force on the left side all day, and I thought guard Ryan Groy and tackle Tyler Marz did an impressive job keeping the potential top draft pick from wrecking the Badgers' offense.

They didn't clear runways for the Badgers' backs, but they opened up plenty of lanes and deserve as much credit as White and Gordon for those impressive rushing totals. By Wisconsin standards, this was a somewhat anonymous group of linemen, but they capped a very strong year with one of their best performances of the year, given the level of competition.

It seemed like Pedersen was open on every other passing play, and he fooled the secondary on the 36-yard catchin the second quarter. That would've been a touchdown pass had Stave's floater not taken so long to arrive.

Brian Wozniak and Sam Arneson each had a catch, and Brock DeCicco may have added another if punter Drew Meyer had a more refined arm. 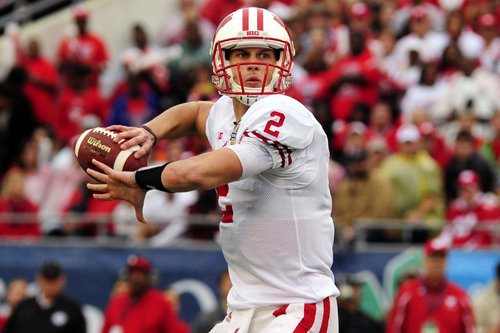 Getting reflective with the end of a year and a season.

In my eyes, the fake punt in the first quarter was a forgivable call, a sure chance to catch South Carolina off guard early and grab an early advantage. I also like the Wildcat handoff from White to Clement, a clever call that came with a 32-yard gain.

The only head-scratchers for me were the identical runs to Gordon on 3rd-and-1 and 4th-and-inches in the fourth quarter. Either get more creative, or try to tie it with a 42-yard kick. It also wouldn't have hurt to throw in a few more jet sweeps and screen passes to White, both of which were successful this year.

The three-man front didn't get much pressure on quarterback Connor Shaw and didn't record a single hurry. Shaw took full advantage with his arm, but more related to the D-line, he had way too much room to run and he finished with 48 yards.

Defensive end Brendan Kelly had a great first half, making the tackle that forced Carolina to punt on its first drive, but sat out the second half with a leg injury.

Early in the third quarter with the Badgers up four, Derek Landisch handed the Badgers a gold-plated platter for victory by stripping Shaw, the ball recovered by fellow linebacker Ethan Armstrong.

That was likely the biggest play of the day from this group, which had a quiet but productive day. Chris Borland finished his remarkable career with a very Borland-like nine tackles and a quarterback hurry.

Watching the Badgers trying to defend passes tested the boundaries of my sanity. Every time South Carolina completed a long pass, it seemed like Sojourn Shelton and Dezmen Southward were hovering near the ball yet never cared to actually look up and, I don't know, see if the ball was coming in their general direction.

After an impressive freshman campaign, Shelton was torched all day, starting with Shaw's 39-yard touchdown pass to Bruce Ellington and he burned Shelton for another touchdown grab in the third. Worst of all was the 49-yard heave to Shaq Roland that set up the Gamecocks' first fourth-quarter touchdown, one that left Shelton throwing his hands up in disbelief as neither he nor safety Michael Caputo managed to get a hand on the ball.

Receivers had way too much cushion, and South Carolina won this game thanks to the play of its talented but very poorly covered receivers.

Kenzel Doe did all he could to answer the Badgers' late prayers, beautifully reading his blocks and tiptoeing 91 yards down the left sideline for a score. It was Wisconsin's first kickoff return for a touchdown since David Gilreath lit Camp Randall Stadium on fire by taking back the opening kickoff against No. 1 Ohio State in 2010.

Jack Russell needs to be capable of nailing 42-yard field goals, and the third-quarter miss clearly convinced Gary Andersen to go for it on fourth down rather than give his kicker another 42-yard try in the fourth quarter.