The story of the Hemers continues our look at Wisconsin's walk-on history.

In high school sports, student-athletes often have opportunities to play alongside their siblings. The odds are not as favorable in college, though, as programs face limited roster spots and increased scrutiny in talent evaluations.

Wisconsin, however, is a special case this season in making a portion of the team a family affair. Within the Badgers' 105-man roster, there are five sets of brothers, including the Biegels (Vince and Hayden), the Trotters (Marcus and Michael)and the Watts (Derek and T.J.).

The two other families, the Armstrongs and the Hemers, share an uncommon bond. Both pairs of sons, Ethan and Thaddeus Armstrong, and Ethan and Ben Hemer, started their careers as walk-ons. The Hemers and the Armstrongs each have their own stories of their paths to Madison, but their journeys have left marks not just on the program that started with both older brothers contributing on back-to-back-to-back Rose Bowl teams, but also on their families.

Three hours northwest of the University of Wisconsin in the city of Medford, Kathy and Jeff Hemer helped their eldest son, Ethan, decide where he'd attend college. Like his future teammate in Ethan Armstrong, Hemer also received offers from some MAC schools (Eastern Michigan and Miami of Ohio), along with an opportunity from Illinois State and interest from a couple of schools in the Dakotas.

Wisconsin, the program he idolized as a kid growing up in the state, offered him a walk-on spot. He narrowed his decisions down to Illinois State and Wisconsin, taking visits to both before accepting the walk-on invitation to the school he wanted to be a part of since his adolescence.

"Every kid wishes they could be here and do this, and for that opportunity," Hemer said, "and I knew that the smaller schools would always be there if this didn't work out, but I would kicking myself later down the line if I didn't give it a shot."

Kathy and Jeff allowed their son to make his own decision, as they knew it would be him (and later Ben, as well) putting in the long hours in the weight room, on the practice field and in the classroom.

"When it came down to finally making those decisions, that's where we put the decisions -- in their court -- and said, ‘Where's your heart?'" said Kathy, who works as a nurse practitioner.

The drive to Madison is a little more manageable from Medford, a city with 4,326 citizens located in north-central Wisconsin, compared to the trips to the other programs that offered. The Hemers also closely followed the Wisconsin program and its renaissance under Barry Alvarez, so the parents were thrilled when Ethan chose Wisconsin.

"We've been Badgers fans forever, so that part was kind of a no-brainer," Kathy said with a laugh.

With no scholarship to pay tuition and no guarantee he would be granted significant playing time, Ethan and his family had to brace for the impact of paying for school in some way

"My parents were extremely supportive of me during this time and just said, ‘Just go and do it, and we'll figure out the money later,'" Hemer said.

"This is a dream come true. This is an opportunity of a lifetime. You need to go live life right now."

"‘This is a dream come true. This is an opportunity of a lifetime. You need to go live life right now.'"

Hemer's journey to a scholarship was delayed a bit with the arrival of one Russell Wilson. Ethan was slated, along with senior wide receiver Jared Abbrederis, to receive the two open scholarships in fall 2011 after he moved his way up the depth chart and started six games his redshirt freshman year in 2010. With one scholarship suddenly going to Wilson, though, head coach Bret Bielema was left in the difficult position of choosing between two worthy walk-ons. He decided to leave it open.

When Hemer finally received confirmation he would be put on scholarship in January 2012, he admitted he almost didn't know how to react to the news.

"I think that earning that scholarship has been one of my greatest accomplishments in life," Hemer said, "That's something that I will forever cherish my memories here and that I was able to be a part of the walk-on tradition that is great ones like [Jim] Leonhard, coach [Ben] Strickland and all of these guys that have left a mark on this university."

His parents were thrilled once the news finally arrived. Kathy thought the relief of earning a free ride would allow Ethan to move on a bit and talk about something else other than trying to earn it. Jeff, who runs a fourth-generation funeral home back in Medford, looks at the experience and how it's shaped his oldest son's mentality.

"He kind of has the attitude now that nobody gave him that scholarship, he earned it," Jeff said.

"He went down there as a walk-on and earned the scholarship." 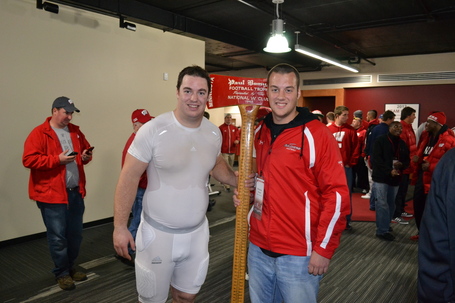 During his high school days, Ben Hemer played both sides of the ball as a lineman and was participating in football camps primarily as a defensive lineman. The Hemers enlisted the help of Midwest Collegiate Scouting, a service based out of Green Bay, Wis., that provides tools to high school players for being identified and evaluated by recruiters.

Like his brother, Ben weighed his schooling options, but he also received a request to change positions. Kathy said Bielema asked Ben if he would consider moving to the offensive line, a position of need at the time. With a laugh, she said it only took Ben about three minutes to switch his mind and his position.

"Loving Madison, having two siblings go here, it's just a family environment, and he's always been there for me." -Ben Hemer

He leaned on his brother for advice as he was gearing up to make his decision, including what questions to ask coaches and what to expect on visits to different universities. He received the walk-on offer from Wisconsin and also knew the Badger experience firsthand from his older brother and older sister, Megan, who graduated in 2011 from Wisconsin's veterinary school. However, Ethan wanted his brother to look around and have his own experiences in the process before making the best decision for him.

"When [Ben] got the walk-on offer here, I said, ‘You know, this is here, go explore other options as well,' and he did that," Ethan said.

"He looked around and searched, but I think ultimately, the same thing that occurred with me happened for him where this is such an awesome opportunity that for a chance to come and play and be a part of the success here was too much to pass up."

"He gave recommendations [on[ what to look for when you're visiting other schools and eventually, it just came down to here," Ben added.

"Loving Madison, having two siblings go here, it's just a family environment, and he's always been there for me." 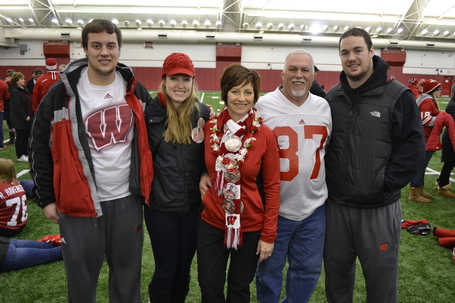 The Hemers traveled to Pasadena to watch Ethan start in three straight Rose Bowls. They conceded they did not make the trip to Corvallis, Ore., when the Badgers fell to Oregon State in September 2012. It was the only game they've missed Ethan play live in the past two seasons, an impressive feat especially considering they had to accommodate their travel arrangements with trips to Ohio State and Illinois in years past around Ben's high school games.

With Ben only a freshman, don't expect the Hemers to stop their road trips around the Midwest and the nation.

"Oh, they were so excited because now they get to come to games for four more years," Ethan said.

"They love doing that. They love the traveling. That's been something that they've greatly enjoyed."