Closing the Book: Why Wisconsin shouldn't be satisfied with Week 1

The scoreboard says blowout, but there are plenty of ways for Wisconsin to improve after Week 1.

Share All sharing options for: Closing the Book: Why Wisconsin shouldn't be satisfied with Week 1

After initially viewing Wisconsin's thorough 45-0 beating of UMass Saturday from the press box, I couldn't help but be impressed. Granted, the Minutemen were, in my mind, a woeful opponent. But the Badgers still managed to dominate from start to finish.

Still, like UW head coach Gary Andersen, I tend to focus on the negatives; mainly, how the Badgers can get better.

"[We] did a lot of good things today," Andersen said in his post-game press conference. "I have a tendency to want to kind of lean to the other side of that."

What was Andersen thinking about as a coach that made him less than pleased about the team's performance in Week 1? Let's take a look

A fumbled snap? What is this, fifth-grade YMCA?

The Badgers had some issues handling the snap Saturday, a negative that if not corrected will come back to haunt the team at some point. Granted, some of the issues stem from the fact that starting quarterback Joel Stave was taking snaps from Dallas Lewallen most of the day. Lewallen, who started his first game as a Badger Saturday, was taking his reps in fall camp at the left guard position. But, with a late injury to starting center Dan Voltz in the lead-up to Week 1, Lewallen was forced to shift to center, a position he was relatively inexperienced at.

Andersen was quite blunt about how he felt when the question arose following the game.

"Huge negative," Andersen said. "There was two of them today and they have to go away. We'll continue to evaluate it and look at it, but the ball's on the ground twice. It didn't cost us today, but if it continues it will, and it will, cost us a football game eventually if we don't get it fixed."

Voltz did make his way into the game directly following the series that produced the second mishandled snap of the game, so watching Voltz play the full game against Tennessee Tech should give us a better indicator if it was just a mistake due to circumstance or an actual problem "Sunshine" has with the snap.

I thought in the movie it was the pitch he couldn't make? 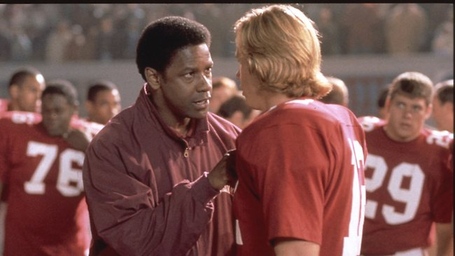 "You know what happened to the last quarterback who couldn't hold on to the ball at Wisconsin? He ended up at a Division II school the next year!"

Stave's performance in the first half

If you have a functioning brain, chances are you took notice of Stave's struggles in the game's first 30 minutes. The redshirt sophomore went 4-for-11 for 36 yards and an interception. The passes were widely out of control, falling low, high and behind receivers.

One of Stave's passes went high and forced Abbrederis to extend upward during the Badgers' third series of the first quarter, opening his body to a hit that knocked the wind out of the wide receiver. Luckily for Stave and Wisconsin fans, Abbrederis entered the game again in the second quarter.

Then there were a few instances when Abbrederis easily had two or three steps on a deep route and Stave underthrew him. Eventually, Stave got passes to the star receiver, but none were passes that could be viewed as true "in-stride" strikes (with perhaps the exception of the first touchdown to Abbrederis, although it looks like the wideout slowed to adjust).

It's not like Stave doesn't know where to put the ball.

"With his speed, I can throw the ball out in front of him and he can go and get it," Stave said of Abbrederis after the game. 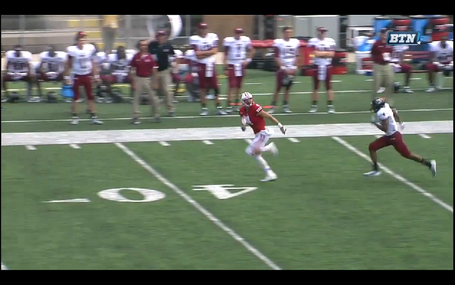 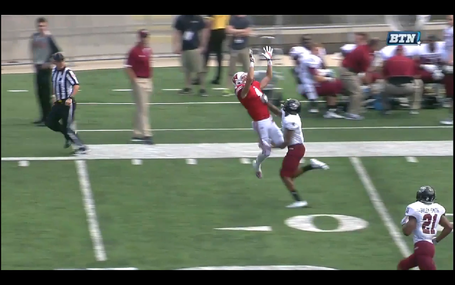 It's strange that Stave struggled, considering the circumstances of his performances last year. Entering the 2012 season at halftime of the Utah State game and making his first road start at Nebraska's Memorial Stadium, it seemed safe to assume that the youngster's proven nerves of steel would make him immune to any opening-weekend jitters.

Maybe it's because he's now "the guy" entering 2013, maybe it's something else, but the fact remains: Stave needs to be more consistent if Wisconsin wants to win Sep. 14 at Arizona State.

Wisconsin's weakness on the outside

Get used to the game plan UMass used against Wisconsin, folks, because every opponent the Badgers play in 2013 will try doing the same thing.

Because of the Badgers' strength in the interior (Ethan Hemer, Beau Allen, Pat Muldoon, Tyler Dippel, Chris Borland, etc.) no one in high hell will make it their primary focus to establish the run up the middle. Even though new defensive coordinator Dave Aranda showed "a very small percentage" of the playbook on Saturday (according to Borland), when Wisconsin wanted to bring pressure, it did so with ease.

That's one of the big positives with a 3-4. If you want to rush three, you can, but in the more basic desire for a fourth rusher there are numerous ways to decide where to bring the fourth rusher from. Blitzes become more exotic, packages more obscure to decipher -- it's an offensive coordinator's headache waiting to happen.

But, that can all be offset with quick pitches and quick throws to the edges, which is what UMass did with plenty of three-step drops. With young, inexperienced corners and nickelbacks in the game for Wisconsin, opposing offensive coordinators are going to want to see if they can shed blocks and make plays in physical situations.

Or, if you're fast enough, you just want to see if Wisconsin's defense can beat you to the edge. 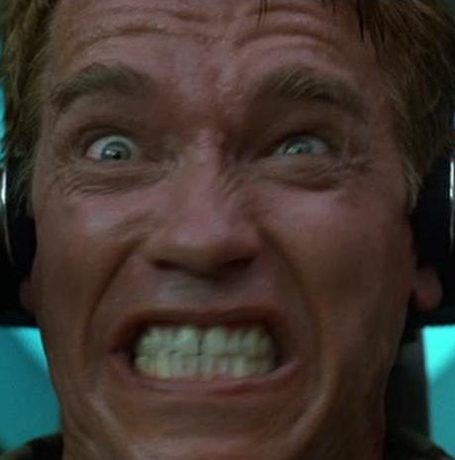 KYLE FRENCH BEING KYLE FRENCH. KENZEL DOE NOT TELLING HIS TEAMMATES TO CLEAR ON A SHORT PUNT. POOR KICKOFF COVERAGE.

Plenty of work for the coaching staff to do, but like Gary Andersen said, it's always a better environment to improve in when you've got a "W" from the previous weekend.