Opponent watch: Wisconsin and Ohio State are playing, and probably other teams, too

The coast is clear -- we can finally talk about Ohio State.

Share All sharing options for: Opponent watch: Wisconsin and Ohio State are playing, and probably other teams, too 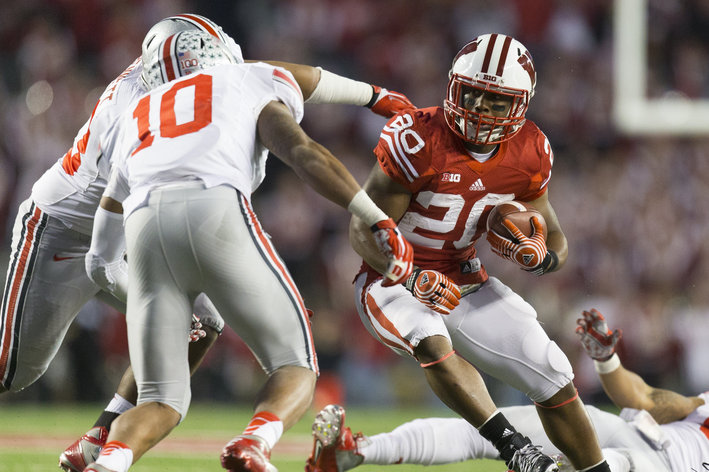 Last week: Ohio State - A healthy number of points, Florida A&M - Not very many points, if any

What happened: Ohio State thrashed a bad FCS team and looked pretty good doing it. Kenny Guiton threw a school-record six touchdown passes, and Carlos Hyde came off suspension and rushed for 41 yards on five carries. The Buckeyes looked phenomenal on both sides of the ball, and it all means next to nothing because Florida A&M is the complete opposite of "good."

Why you should be afraid: Ohio State is a pretty damn good team by all appearances. The Buckeyes went 12-0 last season, they are 4-0 this season in impressive fashion, they have two quarterbacks who can carry a high-powered offense and the defense is loaded with talent. Saturday's game will be played in Columbus, at night, and Ohio State's well aware that a win over Wisconsin just about books its ticket to the Big Ten Championship Game.

So yeah, there are lot of reasons why you should be afraid. But ...

Why you shouldn't: The Buckeyes are Oz waiting to have his curtain ripped back. They have faced the 104th, 123rd and 124th ranked total defenses in FBS, and haven't face a running game better than 97th. In other words, they haven't face anything like Wisconsin, whereas the Badgers got a good crash course in up-tempo offenses, uber-athletic fronts sevens and hostile night-time environments at ASU.

Wisconsin's defense held the Buckeyes to one offensive touchdown in regulation last season, and may have won comfortably if it had a deep-passing game worth respecting. This game could hinge on Joel Stave making his shots when he can take them, in which case expect the margin between winning and losing to be razor thin.

Hubris: Wisconsin will win because this is a right and just world.

What happened: Northwestern looked iffy against Maine, needing two interceptions returned for touchdowns in the first half to provide the winning margin. Offensively, both teams put up 21 points, and the Black Bears actually outgained the Wildcats, 379-373.

Panic in Evanston? Maybe, but Northwestern may have also been looking ahead to Ohio State the past two weeks. Kain Colter and Trevor Siemian combined for just 17 passing attempts, which is fewer than what Northwestern usually attempts when it's concerned about an opponent.

By the way, Northwestern's 10 interceptions lead the nation, as well as its four returned for scores.

Why you should be afraid: I swear Northwestern is sand-bagging just to lull Wisconsin into a false sense of security.

Why you shouldn't: I believe a lot of really stupid things.

Hubris: I'll channel my grandmother, helping at a soup kitchen and seeing a shaman on Wisconsin's bye week to funnel karma our way. You're welcome.

This week: Miami (of the state of Ohio)

What happened: Early-season byes are really messing with me. Anyway, Illinois didn't play anybody so nothing happened.

Why you should be afraid: Good Nathan Scheelhaase.

Why you shouldn't: Bad Nathan Scheelhaase.

Hubris: The Illini appear to be an infinitely better team than they were last year, but they may still have a ways to go to get on Wisconsin's level (opinion subject to change after Wisconsin's next two games).

Okay, so four of the touchdowns came on back-to-back punt returns and two B.J. Lowery interceptions for touchdowns. Still, that makes 31 points on offense off 446 total yards of offense. Northwestern was only mildly better the week before, racking up 38 points and 471 total yards against the Broncos, and Michigan State was miles worse in Week 1, managing just 13 non-defensive points and 297 total yards.

So yeah, Iowa almost looked like a very good offense and didn't look like a bad one. That's a major win for offensive coordinator Greg Davis, even if the game plan consisted almost entirely of handoffs (Iowa attempted 18 passes to 58 rush attempts).

I mean, the play went exactly as well you would expect, but still. What is going on here?

Why you shouldn't: Iowa fans got to scratch their id for the first time in years, but that doesn't mean the Hawkeyes are a contender. Let's take in a bigger sample size before deciding that Iowa is something more than what we thought it was.

What happened: BYU lost the Holy War in a defensive struggle. Taysom Hill had 259 yards rushing against Texas, but managed just 99 yards against the Utes, which wasn't nearly enough to offset an 18-for-48 performance in the passing game. As an offense, the Cougars play right in to Wisconsin's strengths defensively.

BYU's defense also took a step back, allowing 402 total yards to Utah. The Cougars still appear to be stout, however, holding the Utes to 3.9 yards per carry on their way to 129 yards on the ground. Texas managed 3.4 YPC on its way to 132 yards rushing, and Virginia managed 109 on 2.6 YPC.

Why you should be afraid: BYU's defense won't lose the game, and the offense is extremely dangerous if you're unprepared (See: Texas)

Why you shouldn't: BYU still seems like a middling team, albeit unconventional. If Wisconsin's defense figures out the running game, it'll be up to Hill and his arm to win. He is currently completing 35.1 percent of passes on the season.

Hubris: I predicted way too many points last week. Wisconsin won't score 30 points, but it'll feel like a comfortable win.

What happened: Indiana's defense remained inept, but this time the offense couldn't keep pace as it had in the past. Nate Sudfeld entered the game ranked seventh in the county in passing efficiency, but finished the game on the bench for Tre Roberson after throwing just one touchdown to three interceptions. Indiana still had 475 yards of total offense, but the Tigers set the pace with 623.

Why you should be afraid: Indiana's offense has the potential to be scary when everything is clicking.

Why you shouldn't: Wisconsin will be going for 400+ rushing yards in this matchup.

What happened: Saturday's game against Iowa actually has the potential to be kind of fun. I really want to know what the hell Iowa is, for one. For two, I want to see Minnesota's run game. Philip Nelson is out this week, putting Mitch Leidner in charge of the offense at quarterback. Leidner is 6'4, 233 pounds, and he has 20 passing attempts to 46 carries this season. He bullied his way to 151 yards rushing against San Jose State last week, while David Cobb and Rodrick Williams, Jr., combined for 40 carries and another 185 yards rushing. Minnesota's offensive line appears to big and improved.

Why you should be afraid: Minnesota is trying to do its best Wisconsin impression, and so far it's kind of working.

Why you shouldn't: The Gophers aren't the ones averaging 7.99 yards per carry.

Hubris: Wisconsin can do everything Minnesota can do, but better. Also, nine straight.

What happened: The defense figured out how to be stout again after getting Bortles'd in Week 3, and Zach Zwinak rushed for three touchdowns. Christian Hackenberg also looked like a freshman for the first time this season, going 13-for-35 passing for 176 yards, one touchdown and one interception. Rain played a part in all of the precedings, so adjust opinions accordingly.

Why you should be afraid: The Nittany Lions are a reasonably good team, however you slice it.

Why you shouldn't: They aren't great, either. Every facet of their game has seemingly struggled at some point this season. Units improve as the seasons wear on, but as of now Penn State seems like a vulnerable team.

Hubris: If Wisconsin is actually undefeated in conference play up to this point, it sure as heck isn't going to be dropping this game.

In their first week after the Wisconsin game, Arizona State got pasted 42-28 by Stanford, in a game that wasn't nearly as close as the score suggests.