A week after giving up 468 yards against Arizona State, Wisconsin held Purdue to a third of that en route to a 41-10 blowout. Which personnel groupings in particular gave Purdue fits?

After a dominant two weeks to start the season, Wisconsin's defense fell back to earth a bit in the desert. Coming into their fourth game of the year against the Purdue Boilermakers, fans wondered how the team would bounce back after a controversial loss and a game in which certain areas were exposed.

Saturday, those questions were answered, and quite emphatically. Confusing Purdue quarterback Rob Henry and the Boilermaker offense, linebackers Chris Borland and Conor O'Neill once again led a defense that overwhelmed the opposition.

8: Tackles for loss by Wisconsin's defense, compared to three vs. Arizona State

The run defense was stout, allowing only 2 yards per carry. The secondary, which was exposed last week, responded well by blanketing receivers and adding some pressure on Purdue quarterback Rob Henry.

3.2: Yards per play for Purdue offense

0: Penalties by the Badgers' defense (six last week, all against the secondary)

To counter an offense that amassed 256 yards through the air against Notre Dame, defensive coordinator Dave Aranda used the following personnel:

You can say a lot went right. Four sacks. Seven hurries. Eight tackles for loss. There is one formation I do want to dig a little deeper into, that being the confusion-inducing, pressure-increasing personnel utilizing one defensive lineman and a controlled chaos of defensive players near the line of scrimmage.

Used on eight of Purdue's 14 third-down attempts, this scheme gave the Boilermakers fits. Henry completed just two of eight passes against this defense for only 10 yards, and was pressured constantly.  No first downs were gained against it, either.

Why? Here are three different examples of the look to showcase what can and cannot be sent. First look, the first time it was deployed by Aranda: 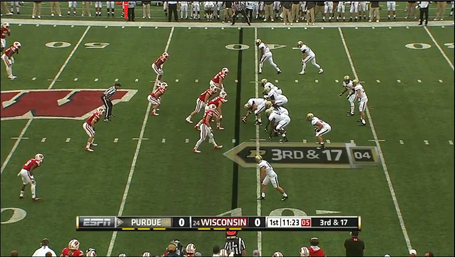 Before the snap, defensive lineman Tyler Dippel stands up but is the lone defensive linemen. Linebackers Ethan Armstrong, O'Neill and Biegel crowd the line, rounding out what looks like to be the four rushers. But notice what happens right at the snap: 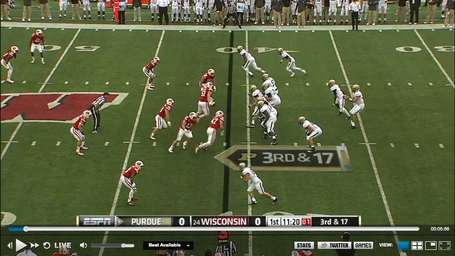 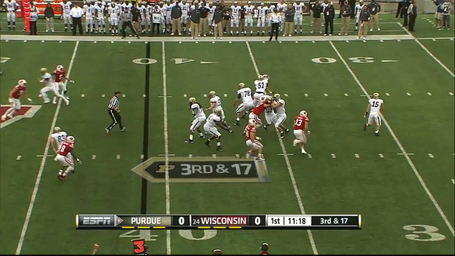 So different linebackers were rushing here -- what about other defensive personnel? In the second quarter, Aranda sends rushers again, this time from the secondary:

This picture is taken just after the offensive huddle is broken. Dippel is the lone guy in a "set" look, looking to rush just off the right guard. No one else is set. Ever get the feeling there's a pack of rabid wolves just waiting to strike? Note how the defense moves fluidly before the snap: 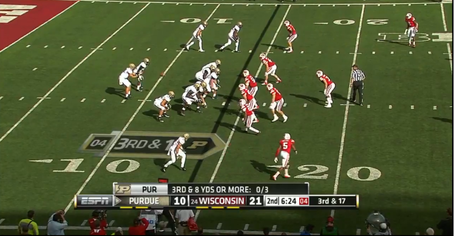 Cornerback Jakarrie Washington (No. 22) lines up to the left side of the defense and rushes off the corner, while Dippel moves inside while Biegel and O'Neill also rush. Borland and Armstrong, while looking like they're blitzing, drop back. 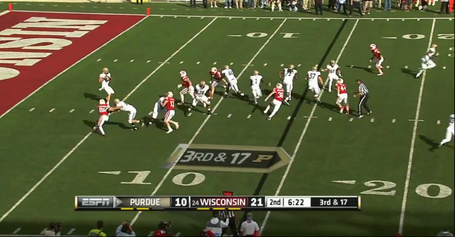 The four rushers get more pressure as Borland, Armstrong and sophomore safety Michael Caputo read yet another screen and stuff the Purdue offense for a 2-yard loss.

Did they only send four rushers in this scheme? No. In the third quarter, they sent five. 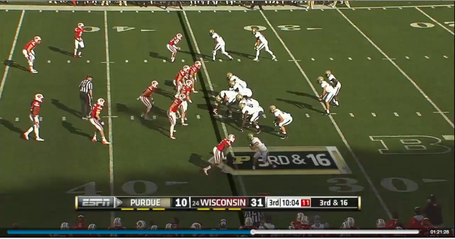 Looks like another standard look with this personnel. Four linebackers and Dippel crowd the line, bouncing around ready to rush. Notice where safety Dezmen Southward is at the far left of the screen, 8 yards off the line, but look where he is in the shot below: 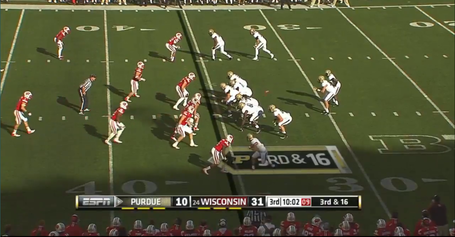 Borland, once lined up to the left side of the defense, starts rotating back to the middle of the field for coverge as Southward starts his blitz to the right along with O'Neill targeting that left side of the offensive line. 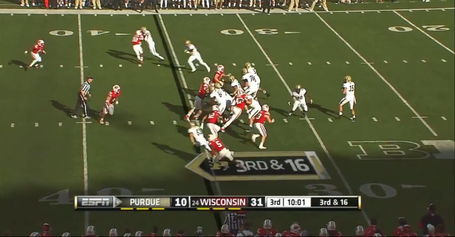 Armstrong gets off his block on the right tackle with his speed and forces another incompletion with O'Neill and Southward from the right side getting there.

Purdue's offense was often confused and never found much of a rhythm with this offense. You can point to many individual players for honors in this game, but the defense as a whole answered the call after a rough week.

Fun fact: Wisconsin has yet to allow a passing touchdown through four games. Chances are pretty good that will change Saturday in Columbus.

The botched offensive play apparently confused Wisconsin's defense as well in the second quarter, as Henry scampered 22 yards for Purdue's first points of the game. The defense appeared to have over pursued to the right, allowing Henry to run through the gaping hole in the middle of the field, then cut it to the left for the score.

Another test awaits on the road this week for Wisconsin against Ohio State. How will Aranda and the defense prepare for quarterback Braxton Miller and the Buckeye offense? Be prepared for a level of talent Wisconsin might not have seen before, even after facing Arizona State two weeks ago. Talent, as head coach Gary Andersen mentioned during Monday's press conference, that has increased in its explosiveness compared to last year.

"I would say this, if you watch the tape from a year ago to now, it's obvious that they've made an emphasis to recruit speed in a lot of different areas on the offensive side of the ball," Andersen said. "They've got receivers that can run, catch, make plays."

"They do have a lot of speed there."