The Monday After: Purdue vs. Wisconsin

Joel Stave has struggled to find his groove this year. If he doesn't find a rhythm Saturday in Columbus, the Badgers will have little chance to pull off the upset.

Share All sharing options for: The Monday After: Purdue vs. Wisconsin

That, folks, is how you respond.

After the west coast debacle out in Tempe, I know fans and coaches alike were anxious to see how the Badgers would come out and play against Purdue. Safe to say, Wisconsin got over the Arizona State loss just fine.

The Badgers delivered yet another Boilermaker beatdown Saturday, thanks in large part to Wisconsin's star-studded running back tandem of James White and Melvin Gordon. Those guys are good, huh? What a luxury it is to have two guys of that caliber in the backfield when you have a quarterback that's struggling.

With the Purdue win officially in the books, the game everybody has had circled on their calendars for months is finally just around the corner. Let's recap what we liked and what we didn't from Saturday, and of course, preview the game in the Horseshoe. It's that time... time for the Monday-after diagnosis. 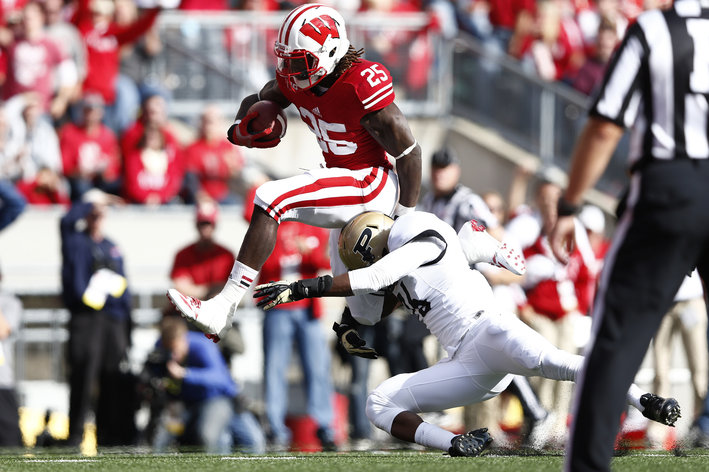 The defense, and close to everything about it. Sure, the Boilers put together one impressive drive in the first half that was capped by a 22-yard Rob Henry touchdown scamper, but aside from that, the Wisconsin defense dominated the game.

The Badgers collected four sacks as a team, which was great to see after it continually pressured Sun Devil quarterback Taylor Kelly but never get him down for a sack. If Wisconsin's pass rush can contain and create similar havoc next week against either Braxton Miller or Kenny Guiton, it'll give the Badgers a shot to pull off a huge upset. Ohio State sure has looked impressive, but the Buckeyes haven't really played anybody, and Wisconsin's front seven is the best they've faced all season.

I think the single most impressive stat from Saturday's game was the defense holding Purdue to 2-of-14 on 3rd-down conversions. The ability to get off the field and get the ball back in the hands of White and Gordon will be crucial Saturday in Columbus. The less time the ball is in the hands of Miller or Guiton, the better.

What needs to improve

Same as last week, the answer here is the overall passing game. It just looks sluggish. Jared Abbrederis seems wide open on his routes, and then everybody else is virtually nonexistent.

Joel Stave still looks disturbingly slow out of his crouch when he's coming out from under center, and he fumbled another snap with Dallas Lewallen Saturday. Now, Wisconsin hasn't lost a single fumbled snap thus far this season, but if that becomes a recurring problem, it will bite the Badgers when they can least afford it.

Lastly, Jacob Pedersen's knee injury is a bit frightening. He's the clear No. 2 target for Stave's passing attack that was already pretty one-dimensional. Is there anybody ready to step up in Pedersen's absence if he misses a game or two? It sure doesn't look like there is right now.

Here's the bottom line: The passing game will have to be more of a factor this Saturday than it has been all year. Ohio State is too athletic and knows Wisconsin's running style too well to let the Badgers gash them play after play on the ground. Somebody other than Abby needs to be ready to contribute in the pass catching department, or else UW walks out of Columbus with its second loss.

White and Gordon would be the easy answers here, but to be honest, they're both playing how all of us expect them to at this point. Unless one of them goes for two bills in a game, they're not garnering the answer here.

It has to a player or players from Wisconsin's defensive unit, and I'm going to go with the defensive tackle trio of Warren Herring, Bryce Gilbert and Beau Allen. The group combined for six total tackles, 2 1/2 tackles for loss and two sacks in Saturday's win. That is great production from guys whose main job is typically to eat up blocks and clog up the middle.

It's been most notably Allen through the first four games, but each tackle has done a great job thus far penetrating the opposing offensive line and knifing through for tackles. ESPN's Ed Cunningham referred to Allen as one of the best defensive tackles in the country during the broadcast, and it's good to see somebody from that line receiving such praise.

Aside from ASU's aerial assault style of offense, you've gotten the sense in the other three games that Wisconsin's defense wasn't going to give up much of anything. Dave Aranda's 3-4 system is certainly working.

The quarterback often gets too much of the praise when things go well, and probably bears too much of the burden of scrutiny when they don't. That's the nature of the business, and while it pains me to do it, Stave is the answer here for the third time in four weeks.

His interception in the first half was a bad throw. He chalked it up to miscommunication between he and Brian Wozniak, but it still wasn't a pretty ball by any means. He later missed on a deep ball to Abby. In all honesty, Stave's just not very accurate with the football right now. I don't know if he's still shaking off rust from not having played football for about 10 months, but we're four games in now and that rust is still a factor.

I don't want to pretend like I know the quarterback position enough to be highly critical of his body language, but when the TV cameras cut to Stave's eyes after he misses a throw or after Wisconsin can't pick up a first down, he looks lost. Is anybody else seeing this? He doesn't have the look of a confident quarterback right now, and that's highly concerning going into the toughest game on the schedule this weekend.

Through four games, Stave has engineered only one long touchdown drive on his own doing. That was the 10-for-10 drive to end the first half against Tennessee Tech, an FCS foe.

He's got to get better, plain and simple.

Getting to know Ohio State 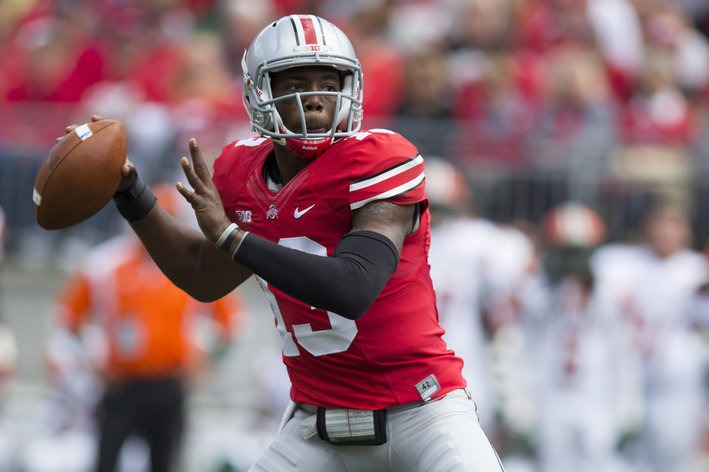 The Ohio State University Buckeyes, led by second-year head coach Urban Meyer. This is the game we've all been waiting for, folks. It's crazy to make such a lofty statement on just the fifth game of the year, but what happens Saturday night in Columbus will go a long way toward defining which direction this Wisconsin season goes.

The game will be on ABC, under the bright lights and the atmosphere will be electric. I would do many close-to-illegal things to get my hands on a ticket for Saturday's game, as I'm sure many of you would too. The fourth-ranked Buckeyes are good, really good. I don't think there is any way around that, but they're beatable.

A middle-of-the-road, Pac-12 Cal team racked up over 500 yards of offense on the Buckeyes' spotty defense, but only 132 of that was on the ground. Wisconsin doesn't have Cal's ability to beat you consistently through the air, so can the Badgers continue to annihilate opposing defenses with the run game? We shall see.

We know the Badgers are going to have to put up a lot of points Saturday. Ohio State boasts the fourth-best scoring offense in the country, averaging 52.5 points per contest. Whether it's Miller or Guiton at quarterback, their offense will be able to move the football. Can the Badgers' O match their pace?

Prediction: Buckeyes by a touchdown, 34-27. It will be close throughout, as these teams have engaged in some great duels the past few years and it's a rivalry that has really emerged recently. The Badgers haven't lost a game by more than seven points in what seems like forever, and I think that streak will continue.

I said it at the beginning of the year: Wisconsin didn’t even beat a .500 Buckeye team on the road when Russell Wilson was the quarterback. Winning on the road in the Horseshoe is an extremely difficult task, and the Badgers will unfortunately fall just short in trying to do so.