Another game, another 500 yards of offense. What did offensive coordinator Andy Ludwig use this week to dismantle the Boilermakers?

Saturday afternoon at Camp Randall Stadium, the Wisconsin Badgers took their frustrations from a week earlier out on an unsuspecting -- okay, they really were suspecting -- Purdue defense, amassing almost 550 yards of offense en route to a 41-10 victory.

Offensive coordinator Andy Ludwig frequently utilized personnel and formations with two tight ends or more, and Wisconsin scored all five of its touchdowns and ran over two-thirds of its plays out of that personnel.

-- More jet sweeps came this week in the first half, this time not just out of the 22 formation. Showing an I-formation with sophomore fullback Derek Watt in the backfield in front of either sophomore running back Melvin Gordon or senior James White, offensive coordinator Andy Ludwig ran it and subsequent fakes out of 31 personnel.

-- Shades of David Gilreath? Senior wide receiver Jared Abbrederis even got in on the jet sweep/end around look, taking a handoff and gaininf 16 yards out of the one-running back, two-tight end personnel.

Let's break down the plays out of the two-running back, two-tight end look, particularly the two touchdowns generated from this personnel. 13 plays were run in the 22, all rushing plays. Let's look at the first score by Melvin Gordon from five yards out.

I-formation with senior tight end Jacob Pedersen going motion left. The arrows show how all the linemen will block. Note how Pedersen will kick out the defensive end and sophomore tackle Tyler Marz will hit the second level against the linebacker on the back side. Gordon goes to the back side as the linemen all block to the right. 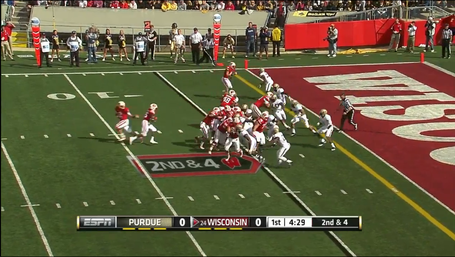 Gordon sees the hole on the back side and runs to the outside shoulder of left guard Ryan Groy. Pedersen gets his block (though he was injured in the process), and Gordon breaks an initial tackle and takes a defender with him into the end zone. 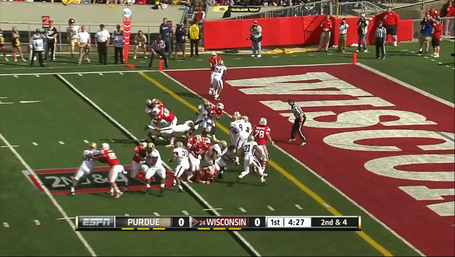 What about White's 70-yard scamper the drive immediately after?

3rd-and-1 on Wisconsin's own 30. Ludwig calls another run, another two-running back, two-tight end I-formation call. 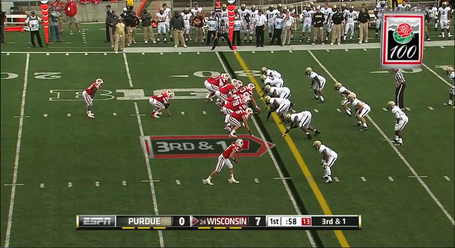 Groy pulls right as White takes the handoff. The other linemen block down to the left. White reads the holes and takes it to the right.

A defender steps up right at the line of scrimmage, but White makes him and then another Boilermaker miss as he takes it to the house. 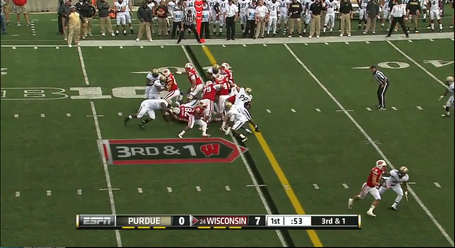 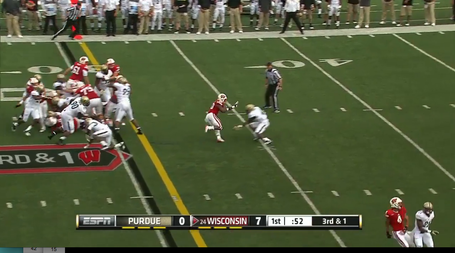 If it's not broken, don't fix it. The Badgers have heavily relied on the running game and its success through the first four games of the year. Wisconsin ran on over two-thirds of its plays in the first half (20 to 11), and more that in the second half (27 to 11).

With Stave and the passing game, the majority of the calls out of 11 personnel were out of the shotgun formation, but there were some under center as well.

White was split out at times, showing off a bubble screen look that worked a couple times.

Although not connecting with Abbrederis on a couple of long passes, it is interesting to see Stave finding open coverage to his left side.