A small collection of big plays made Wisconsin's first loss even more heartbreaking, though serious issues elsewhere cannot be overlooked.

The end was nothing short of a terrible nightmare. Maybe Kyle French sails that kick through the heart of the uprights and the Badgers pick up a big win in Tempe.

But like almost every nightmare, there is some link to reality. That reality in Saturday's 32-30 loss to Arizona State was the offense struggled mightily in its first game against a competitive opponent. Those issues started in what has long been the crux of the Badgers' offense -- the offensive line.

The box scored credited ASU with only one sack, but Joel Stave endured endless pressure. The Sun Devils led the nation in tackles for a loss last year, and they pulled down six Wisconsin players behind the line of scrimmage Saturday, chopping the legs from beneath the offense before if had a chance to get started.

Stave couldn't find a rhythm behind a collapsing wall, and understandably so with oncoming defenders slipping through the cracks and simply overpowering the massive amounts of human flesh attempting to block them. It was ugly and stunted the entire offense, because when Stave can't connect, the defensive strategy is simple: stack the box until the quarterback proves he's a legitimate threat.

Is it time for Melvin Gordon to take over? 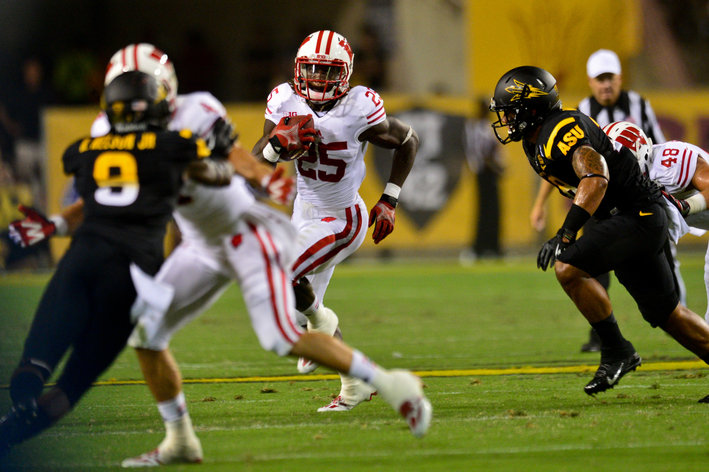 Redshirt sophomore Melvin Gordon appears to be Wisconsin's most dynamic back. Why isn't he carrying the ball more often?

Though Wisconsin held onto the lead for more than two full quarters, there was never a sense it resembling anythign close to "safe." I was convinced if the Badgers couldn't produce a touchdown on the drive that started in the third quarter and crossed into the fourth, their defense would not be able to protect the lead. They settled for a field goal and all that's left is a blur consumed by one enormous officiating mess.

Even considering the difficult circumstances under which he was operating, Stave looked more like the redshirt freshman we remember than the guy who completed 83 percent of his passes in Week 2. He opened the game with three straight incompletions, and just two of his 15 completions were for more than 10 yards. Explosive, the passing game was not.

Aside from the 51-yard toss to Jeff Duckworth that positioned UW for the game-winning hypothetical field goal, Stave failed to open up the field or consistently challenge ASU's secondary. His 50 percent completion percentage was his lowest since he went 7-for-15 against Minnesota last year, and it's harder to swallow this type of game when he's no longer the youngster learning on the fly.

What this all meant was the brunt of the offensive workload fell to the ground. And over 83 percent of the Badgers' rushing yards came behind one back: Melvin Gordon.

In a game where there was little to brag about offensively, watching Gordon continued to be an exercise in pure bliss. Even against an oppressive D-line, he flashed incredible speed around the edge, front and center when he shuffled through a crowded line of scrimmage and burned the remaining defenders on an 80-yard touchdown run early in the third quarter.

At 12.9 yards per carry, Gordon is now the lone FBS back with at least 30 carries averaging better than a 10-yard clip. His 477 rushing yards also rank second nationally, and it's not too early to start thinking about his Heisman candidacy.

The rest of the backs didn't fare nearly as well, ASU slaying the three-headed monster. James White ran for 49 yards and just 3.8 per carry and Corey Clement never had much of a chance to do anything substantive.

While the passing game was lackluster, it was refreshing to see someone not named Jared Abbrederis catching passes. Abbrederis hauled in six passes for 87 yards, but White had four more, Jordan Fredrick two and that one by Duckworth doing his Duckworth thing.

It was an especially positive sign to see them move the chains, and quickly, to position themselves for a comeback as time expired.

Jacob Pedersen starred in what is really a one-man tight end show and had an incredible impact on the game considering he caught three passes. The first was a beautiful grab in the back corner of the endzone for Wisconsin's first touchdown, a play that demonstrated just how gifted an athlete he is.

He was also the recipient of Chris Borland's (OK, so what can't Borland do?) pass on the fake punt, which easily qualified as the boldest call of the game. Pedersen didn't collapse under the pressure by letting it slide through his fingers, instead racing 23 yards to keep the game in reach.

As maniacally creative as the fake punt was, offensive coordinator Andy Ludwig never had a chance to try the intriguing looks seen in the first two weeks. That was largely because Stave was under constant pressure, but I would still like to see more of those first- and second-down deep routes to Abbrederis. When they work, they're an absolute game-changer, so why not try a few on 2nd-and-7 or 1st-and-10?

It's a loss that will be forever condensed into a time capsule of 18 seconds and the officials huddling before casually trotting off the field as if in denial of what just happened. Tempting as it is to lose sight of all that happened before, let's not forget that a trick play and Duckworth's uncanny ability to make game-saving catches in the biggest of moments set up the Badgers for a cruel, heartbreaking loss.

It's a nightmare that never develops if the offensive line holds its ground, allowing Stave to actually have a moment to survey the field and giving the tailbacks a chance to escape the backfield. But that is just a dream, one fans will never get to live.