Can Wisconsin's running backs repeat the performances of the 2010 trio?

Could Melvin Gordon, James White and Corey Clement have the same success this season as Wisconsin's 2010 three-headed attack?

Share All sharing options for: Can Wisconsin's running backs repeat the performances of the 2010 trio?

We knew running backs Melvin Gordon and James White would be key components of Wisconsin's offense this season, but after two impressive games from Corey Clement, it makes you wonder what sort of role the freshman will play in the offense this year.

It's early in the season and Clement's touches could dwindle quickly with tougher competition on the horizon, but thus far he's flashed the potential to be another successful back at UW.

It begs the question: does this backfield have the potential to compete statistically with the dominant 2010 backfield of John Clay, Montee Ball and White?

To recall how good that trio was, here are their stat lines from that season:

How insane are those numbers? Not only did each essentially rush for 1,000 yards but they combined for 46 touchdowns, too. All also gained nice, round numbers of at least eight yards per catch.

Now, the reason I even bring up the question of whether the current backfield could match these numbers is because of how rare it is to possess such a talented trio of backs -- even at Wisconsin.

Even with UW's success of the ground the past two seasons, Ball and White were the primary backs with Gordon or Jeff Lewis getting an occasional touch or two.

It's obvious Gordon and White will get their touches but the question remains whether Clement will become the next freshman version of White (156 attempts) or Lewis (33 attempts) in terms of how many times he touches the ball.

Can Corey Clement be an all-time Wisconsin great? 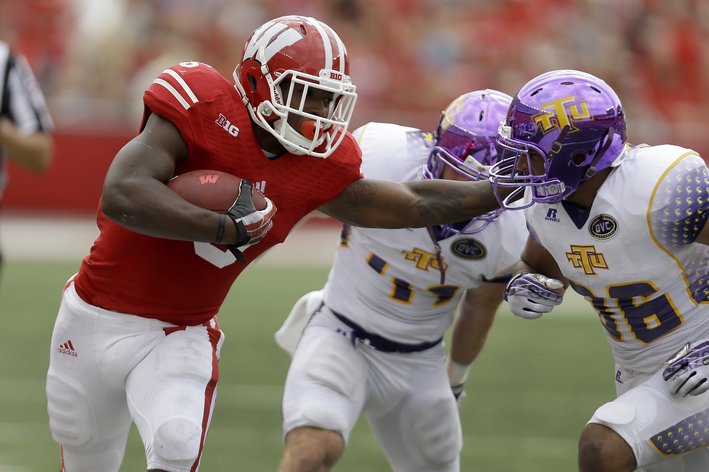 His freshman numbers will certainly go a long way in providing an answer, but Corey Clement could already have a great opportunity to become one of UW's top all-time running backs.

This is a fun question to toy with, but I honestly don't see the current three-headed attack coming close for a few reasons.

For one, I can't possibly envision Clement stealing enough carries to put up a 1,000-yard season. In 2010, the carries were split relatively evenly, and although Clay was coming off Big Ten Offensive Player of the Year accolade, it was clear his physical style of running between the tackles wouldn't be enough to carry the Badgers by itself. It was versatility and contrasting running styles that provided Ball and White opportunities to get on the field.

At the time, too, Ball's future at running back was largely undetermined, as he had contemplated changing positions because of building frustration over his lack of a clear role in the offense. So while Clay had a defined role in the offense, Ball and White were still unknowns heading into the season, as opposed to this season where Gordon and White came in knowing they'd split carries as integral pieces of the offense.

In addition to how the carries are divvied up, no offensive line will ever compete with UW's from 2010. It has to be one of the best in the history of college football, featuring Gabe Carimi, John Moffitt, Peter Konz, Kevin Zeitler and Ricky Wagner -- and Bill Nagy as the sixth man. Some of them haven't had great starts to their NFL careers, but they've all made it to the next level and a few were even first-rounders, as well.

Lastly, quarterback Scott Tolzien was leading the charge in that Rose Bowl season. He was probably one of the most underrated members of that team, completing 73 percent of his passes and throwing for nearly 2,500 yards on his way to earning the Johnny Unitas Golden Arm Award. Tolzien wasn't the focal point of the offense but he was incredibly smart with the football and took pressure off the running game by completing occasional downfield passes.

There's no debating the Badgers don't have the same caliber offensive line and quarterback now as they did in 2010, and it's difficult to envision Clement having a James White-esqe freshmen campaign with the talent in front of him, so I think I'm already going to put the kibosh on the idea this trio can match the one of three seasons ago.