Three Wisconsin running backs are each sitting on 250-plus yards gained through two games this season, and starting quarterback Joel Stave has only had to take one sack so far heading into Week 3. As the Badgers prepare to face one of the more aggressive defenses in the country, much of the pressure falls on the offensive line's shoulders to show it can sustain its early-season success.

MADISON -- Early in the second half of Wisconsin's season-opener, right tackle Rob Havenstein saw exactly what he and his running mates had been waiting for.

He recognized that UMass planned on bringing a blitz from the boundary to his side, something the Wisconsin offensive line had worked on tirelessly leading up to Week 1. His eyes lit up, knowing reps upon reps during fall camp were about to flow into game action.

"We were thinking they were going to run it four or five times in the game, and finally we saw it in the second half," Havenstein said. "I peeked my head out during the play, and sure enough, there's the pressure."

The veteran junior lineman made the alert, quarterback Joel Stave signaled the correct check and running back James White was crossing the goal line 51 yards downfield a few seconds later.

"You couldn't draw that up any better," Havenstein said.

Getting to know Arizona State 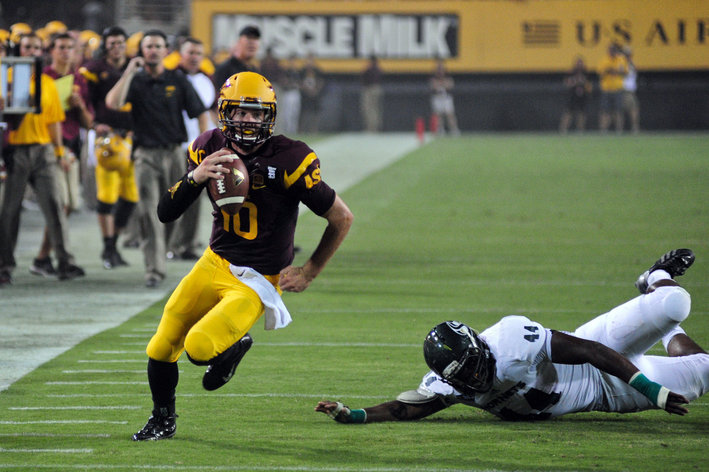 Catch up with everything you should expect from Arizona State as Wisconsin prepares for its first legitimate competition of the season.

It came less than a quarter after Melvin Gordon ran off right tackle for an untouched, 70-yard touchdown and not long before Corey Clement finished off a 45-0 rout of the Minutemen with a 23-yard score.

Through two games of what many outside the program would consider warm-up competition, the offensive line has made life on the Badgers' top running backs rather easy, as the three have each already recorded 250-plus rushing yards through 120 minutes of game action.

A continuation of the line's early-season success this week at Arizona State would likely catch a wave of national attention and elevate the ceiling many have for Wisconsin's offense.

"Obviously, it's a great challenge for us being an offensive line trying to come up and make our mark," Havenstein said. "These guys [Arizona State] have proven themselves to be one of the best. I'm real excited to get down there and see what we can do."

The Badgers will be forced to block All-American defensive tackle Will Sutton and a number of other front seven players that are far superior to what Wisconsin's offensive line has seen through two weeks of this season. Offensive line coach T.J. Woods said the Sun Devils move Sutton around the line of scrimmage enough that all five of the Badgers starters up front will have to block him.

Paving way for Wisconsin's three stud backs may not even be the most difficult task heading into this weekend, though. Arizona State, which finished second nationally with 51 sacks last year, loves throwing a number of different blitzes at opposing offenses. It'll be quite the test for a Badger front that allowed two sacks per game a season ago.

"I don't think they're afraid to create one-on-one matchups in pass protection, and I think they feel good about their matchups in that setting," Woods said of the Sun Devils. "I think they do a good job schematically of being able to get their good players on the people that they want them to be on. You've got to win one-on-one pass protection battles, which is a little bit different than a base, four-down front. That's 5-on-4 instead of 5-on-5 or 6-on-6 with a running back. That'll be a challenge for us this week."

Even though Wisconsin has only given up one sack through its first two games, Woods admitted after practice Tuesday the team's pass protection isn't "up to our standards or the expectations that we set," but he does see it progressing towards where it needs to be.

It's only a matter of days before the Badgers find out whether Week 3 was too early for their rather inexperienced line to face a road test like they'll get from the Sun Devils Saturday night. Senior left guard Ryan Groy doesn't believe it will be.

"We've got to get ready this week," he said. "We've put in a lot of time and effort into this fall camp and this fall, and I think our offensive line is ready. I think we've been handling one-on-one blocks really well. We put a lot of emphasis on protecting the passer, and that needs to happen this week."

While Sutton receives the most attention, Woods made it clear he's far from the only player the Badgers may have trouble slowing down Saturday. The coach praised defensive linemen Carl Bradford and Jaxon Hood, and noted those guys can wreck enough havoc to open up easier plays for the Sun Devil linebackers.

"Their whole defense is good," Woods said. "They're aggressive. They're athletic. They blend multiple sets, and they make you think. They play the right way on defense. That's why they've been successful on that side of the ball.

"We'll be up for the challenge. I'm excited to get out there and see what these guys can do."