Wisconsin defense preview: What to expect Vs. UMass in Week 1

Our weekly series begins with a look at how "Aranda's attackers" match-up with the Minutemen. We welcome Daniel Malone from MassLive.com to preview Wisconsin's opponent this week.

Share All sharing options for: Wisconsin defense preview: What to expect Vs. UMass in Week 1

The beginning of the college football season, a near national holiday that should allow all fans to tailgate for weeks on end, is only a few days away. Wisconsin takes on the UMass Minutemen Saturday, the beginning of the Gary Andersen era and of defense coordinator Dave Aranda's transformation of the Badgers' defense into an aggressive 3-4 scheme. Today, our weekly series begins on how the Wisconsin defense performed the week prior.

Only problem is, there's no game to review, yet.

Thus, we requested the services of Daniel Malone, the UMass beat writer for The Republican and MassLive.com, to help us breakdown the Badgers' first opponent of 2013. After the questions, check out Bucky's 5th Quarter's keys for the Badgers defense. A big thanks to Dan taking time out of his weekend to help B5Q. Make sure to follow Dan's great insight on Twitter at @Daniel_Malone.

Offense preview: What to expect vs. UMass 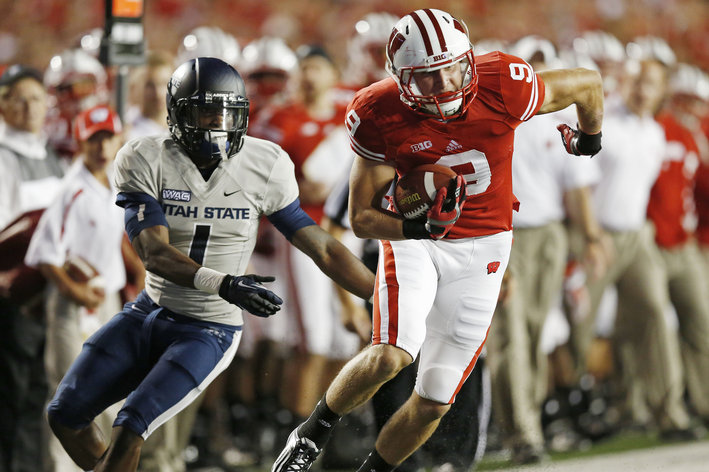 The Badgers have named "Joel Stave OR Curt Phillips" as their starting quarterback. Unclear as that is, we still do have an understanding of what Wisconsin's offense will look like in Week 1.

Jake Kocorowski (JK): The UMass football team is coming off a rough first season in the MAC and FBS play, going 1-11 overall and 1-7 in conference play. What are this year's expectations for second-year head coach Charley Molnar and his team?

Daniel Malone (DM): If you ask Molnar directly -- and I've tried -- you'll get the standard ,"We just want to improve each week" coachspeak response. But realistically, UMass needs to at least double its win total from last year to meet expectations in 2013. Most people are projecting those wins to come at home against Maine (an old FCS rival) and Akron (the only team the Minutemen beat last year). I also think they stand a good chance at home against Miami (OH). Here's the scale I use: Three wins, outstanding. Two wins, progress. One win, disappointing. No wins - disaster.

JK: Coach Molnar brings in a new offensive coordinator in John Bond. What type of offense and offensive schemes have you seen out of UMass' offense during fall camp, which last year only scored 152 points in 12 games?

DM: The addition of John Bond to replace Mike Kruczek hasn't really changed what UMass is trying to do on offense, which is run an up-tempo spread. Quarterback Mike Wegzyn operates almost exclusively out of the shotgun and relies heavily on short-to-medium passes. In the ground game, I'm expecting a running-back-by-committee approach. Overall, it's still very much Molnar's scheme, although he will give up much of the play calling duties to Bond after retaining that responsibility for himself in 2012.

JK: Sophomore Mike Wegzyn comes back as the starting quarterback for the Minutemen after throwing six touchdowns and 10 interceptions in 2012. I've seen coach Molnar give praise to the progress of the young Tennessee native, but what have you seen out of the him so far in fall camp?

DM: Wegzyn has definitely improved from the end of last season. He's still far from perfect, but another offseason in the weight and film rooms has served him well. Wegzyn was always a confident kid, but you can see now that he's more comfortable making his progression reads and putting touch on throws. I don't think you can undersell the effect of Wegzyn going into the season knowing he's "the guy," either. Last year, it took an injury to presumed-starter Kellen Pagel for Wegzyn to see the field. This time around he came out and ran away with the job. Wegzyn's certainly a work in progress, but he's made some strides, too.

JK: Who are the playmakers at the skill positions of running back, wide receivers and tight end? I heard senior tight end and captain Rob Blanchflower might be sidelined for Saturday's game?

DM: Right now, Blanchflower is questionable for Saturday's game with a pair of undisclosed injuries, and I'm really not sure if he'll suit up. Behind Blanchflower, there's really not much in terms of experience or production. Ricardo Miller, a fifth-year senior who transferred to UMass from Michigan this offseason, would be in line to replace Blanchflower at tight end, but he's never caught a pass in a game. And of the Minutemen's other receivers, only sophomore Tajae Sharpe, who finished with 20 catches for 206 yards last year, has substantial game experience. So, they'll be counting on unknowns like sophomores Elgin Long, Bernard Davis and Derek Beck, as well as walk-on freshman Shakur Nesmith, to step up.

On the ground, starter Jordan Broadnax is also injured and will miss the game, meaning redshirt freshman Stacey Bedell, probably the fastest player on the team, will get the start. Behind him will be sophomore Jamal Wilson and freshman Lorenzo Woodley. But, again, I'd expect all three to split carries.

JK: Last year's offensive line gave up 32 sacks. How does this year's line shape up?

DM: Last year's offensive line was nothing short of a disaster, mostly because injuries kept UMass from starting the same five guys out there from week to week and the unit had no depth. It was so bad that then-freshman defensive tackle Al Leneus was converted to guard midseason and immediately became a starter. This season, the numbers are better, but the line is still lacking experience. Senior left tackle Anthony Dima and sophomore center Matt Sparks were locked into their positions going into spring practice, but the other three positions were up in the air. To help bolster the unit over the summer, Molnar convinced departed senior Vincent Westcarr to rejoin the team at right guard and brought in fifth-year Rutgers transfer David Osei at right tackle. Freshman Tyrell Smith won the left guard job in camp. Admittedly, I'm pretty anxious to see how this starting five jells in actual games.

JK: In your opinion, what are the key match-ups, and where do you see UMass giving the Badgers' defense problems?

DM: Honestly, with Blanchflower out, the Badgers give UMass matchup problems at every position on the field. As such, I'd say this is a good game for Wisconsin to test-run its new 3-4 defense. If the Minutemen can exploit any weakness, it may be getting their fastest players like Bedell or Sharpe with the ball in their hands with some room to run. But that's assuming the line gives Wegzyn time to find open receivers, which rarely occurred in 2012.

A year ago, UMass lost by 50 points to Denard Robinson and Michigan. I don't know if Saturday's game will be quite that lopsided, but it's going to be another long day for the Minutemen.

1. Be aggressive. As Dan points out, the offensive line for UMass is unproven. Reporters saw first-hand the type of mayhem Aranda's defense gave Wisconsin's own front five during practices at time. Creating pressure and confusion will lead to mistakes and turnovers by the young Wegzyn and the Minutemen offense.

2. Don't beat yourself. There will be some mistakes by the Badgers in the transition to the 3-4 scheme early on. As their opponents are just in their second year in the FBS and are in complete rebuilding mode, misalignments or broken assignments may be made without as many dire consequences as one defense would suffer, against say, Arizona State. However, I expect the Badgers to have minimal mistakes facing this MAC opponent. Side note: Will the wheel route kill them again this year?

3. Stay healthy. Senior F-side linebacker Ethan Armstrong was sidelined for a while with a minor lower leg injury during fall camp. Wisconsin does have depth within the front seven, something Andersen has repeatedly said, but keeping Armstrong, senior "Mike" linebacker Chris Borland and all starters healthy for the weeks ahead are a must.

Special thanks again to Dan Malone of MassLive.com and the Republican. Check back next Tuesday for a defensive breakdown of Wisconsin's starting 11 against the Minutemen, plus a look at the keys against the Golden Eagles of Tennessee Tech.