Wisconsin offense preview: What to expect from the Badgers Vs. UMass

The Badgers have named "Joel Stave OR Curt Phillips" as their starting quarterback. Unclear as that is, we still do have an understanding of what Wisconsin's offense will look like in Week 1.

Share All sharing options for: Wisconsin offense preview: What to expect from the Badgers Vs. UMass

Five days ahead of the season opener, we still don’t quite know who Wisconsin will start at quarterback. The depth chart unveiled Monday indicates both Joel Stave and Curt Phillips should get a quasi-tryout -- one that could possibly create separation between the two -- against FBS punching bag UMass.

Regardless of who’s under center, big plays and touchdowns shouldn’t be tough to come by. Last year, Michigan and Indiana combined for 108 points against the Minutemen, who mustered just 19 points in those two games. Their defense allowed an absurd 40.2 points and 224 rushing yards per game last year, nearly every opponent pummeling them in a 1-11 season.

Against such a porous defense, don’t be surprised if it’s more than just Stave and Phillips who get in on the fun. Think Nate Tice cruising into the end zone circa 2011, that glorious run the only touchdown he scored as a Badger. The offensive line should make the UMass defenders disappear into thin air, turning the field into one giant offensive playground. 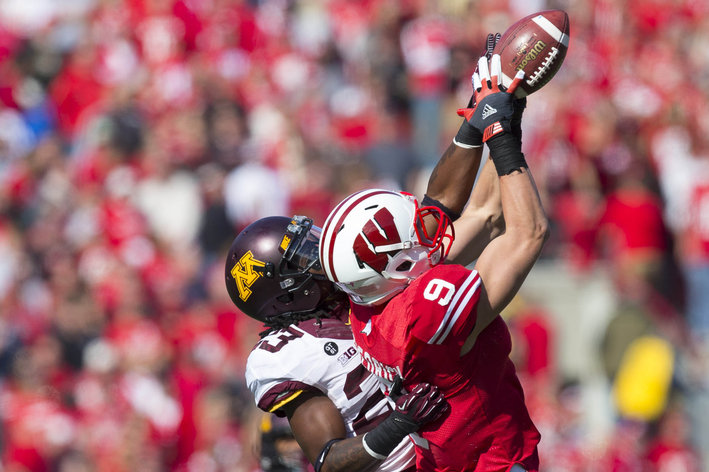 Wisconsin's wide receivers know they have to support Jared Abbrederis, and they're growing more confident by the day in their ability to do so.

Fans will watch with deep intrigue at what kinks Andersen works into the offense, what tricks offensive coordinator Andy Ludwig is hiding up his sleeves. But unless Andersen has been fooling the media for the past eight months, don’t expect any cataclysmic changes (dare I say, the spread?). The power-run game should trample the Minutemen, and chances are Andersen is hiding those tricky plays for more important games later in the season.

Though they were not a full FBS member in 2012 and thus are not listed among national NCAA statistics, UMass’ rushing defense would have ranked among the 10 worst in the country. At 236 yards per game, Wisconsin’s rushing offense ranked 13th nationally -- just a bit of a mismatch.

Unless UMass has made dramatic improvements slowing the rush, James White and Melvin Gordon should run wild. It would surely be a surprise if at least one of them didn’t break away for a 50-plus yard rush and multiple touchdowns. If the tailbacks cut and push their way through the UMass defense with ease, we’ll see if Ludwig likes to work in the play-action or keeps pounding the ball up the middle until it doesn’t work, a la Paul Chryst.

We may even get our first taste of freshman running back Corey Clement, the much-hyped recruit out of New Jersey. These early games, especially when they turn into blowouts, can become in-game tryouts for players fighting for playing time.

And we should see just that type of competition among the receivers, where the No. 2 option is still somewhat of a question mark. Kenzel Doe, Jordan Fredrick, Alex Erickson et al. all trying to prove they can be effective options. As they did last year, the Badgers need another threat alongside Jared Abbrederis, and it’s ideal that this problem is solved before conference play rolls around.

If the UMass defenders dedicate too much attention to Abbrederis, it could mean a big day for tight end Jacob Pedersen. Pedersen certainly didn’t meet his expectations in 2012, but he’s been named to the preseason John Mackey Award watch list and looks poised for a big year as a fifth-year senior. He has a real shot at being Wisconsin’s best receiving tight end since Lance Kendricks, and strong numbers early in the season would help him get there.

To judge arguably the most unproven piece of this offense, however, fans will have to look beyond just the long runs and secondary-splitting bombs down the sideline. An offensive line with just two returning starters in Ryan Groy and Rob Havenstein has plenty of potential but just as many questions.

Sure, the Minutemen won’t exactly replicate the Ohio State defense, but how comfortable do they look pulling and shifting a cohesive unit? The first depth chart lists dual starters at center (Dan Voltz/Dallas Lewallen) and right guard (Zac Matthias/Kyle Costigan), so who takes the early lead in those battles?

Against a defense of this caliber, the men in the trenches should be creating gaping holes with regularity. It’s smart to view this more as an early performance test for the O-line rather than turning bright-eyed at the final numbers UW racks up.

This is one of those games that, barring disaster, is more about positional battles than the final score. It’s our first measuring stick for the new season, the first warm-up before the Badgers face their first true test two weeks later when they travel to Arizona State. The box score should pop with big offensive numbers, but the attention of coaches will quickly shift to individual play.

This is when we finally see Andersen working a gameday sideline, and the humid late-August air will be bustling with excitement. If Wisconsin doesn’t win by at least three touchdowns, it’s a sign there’s still some serious work to do.

Luckily, that’s just what these cupcakes are for.