Hyperbole aside, the Badgers have several glaring weaknesses entering 2013. How critical will they be?

Injuries can be the most damning thing to a college football team's season, particularly when they strike in fall camp. Luckily for the Badgers, Ethan Armstrong's lower leg injury has been the only major hit thus far and all signs still point to him returning before the season opener.

Even without injury concerns -- yet -- Wisconsin has some serious voids to fill for starting roles, so depth is of great concern at a few key positions. That holds particularly true for the offensive line, wide receivers and defensive backs.

Here are the projected starters at each of these three position groups: 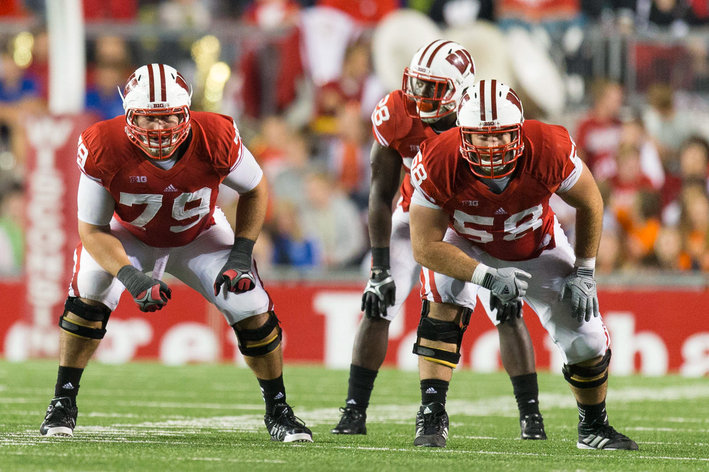 How will the Badgers compensate for change along the offensive line? Our projected depth chart, reflecting daily fall camp changes.

UW is relying upon a young center in Dan Voltz to fill the spot of current Dallas Cowboy Travis Frederick, so it's a daunting task. While Voltz continues to impress, he'll certainly endure growing pains in his first season of college football action.

The Badgers will also count on Dallas Lewallen to stay healthy, which has been an issue since he came to Madison three years ago. And although Kyle Costigan may return as the starter at right guard, he still needs to improve his technique.

All in all, this could develop into a solid line. But there will be more inexperience among the starting five than we've seen in the last few years, resulting in extra-thin depth, too.

I think we're all well aware of the wide receiver issues by now. It's pretty much Jared Abbrederis, then everyone else. Jordan Frederick should be improved after a year under his belt and could fit the possession receiver role well, but the coaching staff continues to hope for more playmakers to emerge.

It's pretty much the same cast of characters as last season with freshman Rob Wheelwright as the only real addition to the mix. But again, this is a group like the offensive line with question marks in primary spots.

It's well-noted that Dezmen Southward is the only returning starter from last season's secondary. He'll undoubtedly be the leader of the pack and an exciting player to watch given his innate instincts and athletic ability. As for the cornerbacks, it may be the first year in which Darius Hillary and Penial Jean are projected to be consistent starters, but at least each has been solid a contributor in the past.

They'll certainly have to grown into their new roles, though. The biggest concern remains the starting safety position opposite Southward. Redshirt freshman Leo Musso has been taking the reps there during fall camp, but whomever is eventually deemed the starter will be vastly inexperienced.

More than any other position on the team, the defensive backs severely lack depth.

I didn't mean to be blatantly obvious with these position overviews, as I think most are cognizant of the position battles, but the Badgers' lack of depth in these positions worries me. Every team in the nation has its own weaknesses, but it's worth noting the Badgers have serious concerns at these positions while they're still practically at full health.

No matter how you look at it, injuries are inevitable. You just have to hope they come at a good time -- not that there ever really is one -- and are few and far between.