Don't call it a comeback, or something. The former Wisconsin defensive end who originally thought his college career would be shortened by injury will now be playing for Miami this fall.

Share All sharing options for: David Gilbert's transfer to Miami is official

Indeed, David Gilbert is now a Miami Hurricane. According to Michael Casagrande of the South Florida Sun Sentinel, Gilbert has made the decision to transfer to Miami and will be eligible to play this fall. The paperwork is still being finalized, but the transfer is essentially all but done.

If healthy, this has to be considered a coup for Miami. Naturally, "if healthy" is perhaps the most dangerous qualifier in sports. Gilbert was expected to transition to outside linebacker this fall for the Badgers, who are switching to a 3-4 defense under new defensive coordinator Dave Aranda. But on April 5, Wisconsin released a statement saying recurring foot issues would prevent Gilbert from using his final year of eligibility. The release was sent out via a sad-sounding tweet from UW's official football Twitter account, and everyone was led to believe Gilbert would take time to fully heal his foot and then attempt to make it in the NFL. From the statement:

"This was a difficult decision for me but I have had multiple injuries and surgeries on my foot and feel that no longer playing at UW is the best decision for me," Gilbert said. "I have been dealing with pain in my foot since the injury first occurred and I just need to give it time to fully heal."

"David's decision was part of an on-going discussion we have had for a number of weeks," head coach Gary Andersen said. "I would have loved the opportunity to coach David but we always want to do what's in the best interests of the young man. He needs a year to recover from his injuries and focus on graduating. It is always tough when a young man's college career comes to an end due to an injury but David knows we are here to support him in any way necessary." 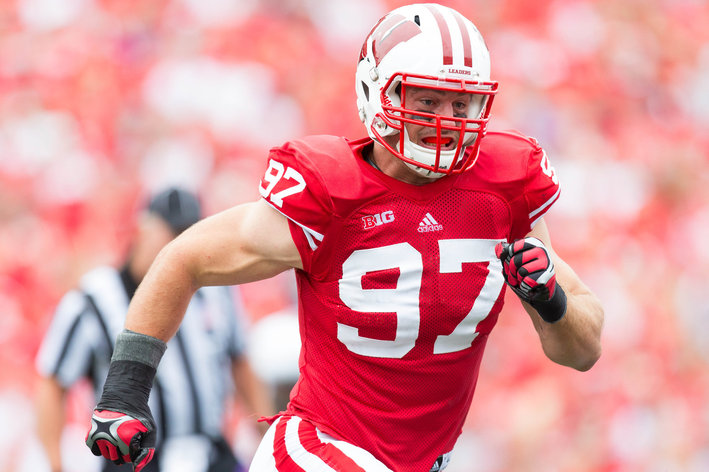 How good will Wisconsin's pass rush be?

So what do we make of this? There were the slightest of rumbles, essentially message board chatter, that Gilbert wasn't entirely keen on moving to outside linebacker. More rationally, the move seems like a potentially happy ending for the consensus All-Big Ten honorable mention -- his hometown of Coral Springs, Fla., is less than an hour from Coral Gables. Gilbert could heal up, recoup some lost draft stock and literally ride out into the sunset of his college career.

Wisconsin fans might feel somewhat scorned, considering four players have departed the program since Andersen took the job. As discussed in this morning's Badger Bits, those players -- quarterback Danny O'Brien and defensive backs Reggie Mitchell and Donnell Vercher -- all had legitimate reasons to leave. It is kind of a funky coincidence to begin your first big-time coaching job with, but Andersen had much, much worse to work with when he took over at Utah State in 2009.

For the Hurricanes, they get a dose of good news for one of their greatest weaknesses. Both of their starting defensive ends, Shayon Green and Anthony Chickillo, return, but the addition of Gilbert could elevate the unit to a point of strength. The Hurricanes ranked 120th among FBS teams in total defense last season, allowing 486.4 yards per game. On the ground, they fielded the nation's 114th-ranked unit in surrendering 217.92 rushing yards per game.

Ultimately, the outcome here circles back to Gilbert's health. After playing in 25 games over his first two seasons in Madison (starting zero, though), he lasted just four games in 2011 after suffering a season-ending broken foot. He broke it again during bowl practice later that December, and then continued to experience issues with the foot starting in the fourth game of last season. This spring, Gilbert thought the injury "was just turf toe," though it turned out there was ligament damage that required surgery, ending his spring by mid-March.