The Badgers get their third night game of 2013 as the schedule grows slightly more appealing.

Another bit of scheduling news trickled out on Wednesday, as the Sept. 14 game between Arizona State and Wisconsin in Tempe, Ariz., has been slotted for a 9:30 p.m. CT kickoff. The game will be aired on either ESPN or ESPN2.

Wisconsin announced the kickoff time shortly after news hit of the neutral-site package with LSU nearing completion. The trip to Tempe will be the Badgers' last non-conference game of the early fall (BYU also comes to Madison on Nov. 9) before Big Ten play begins the following week at Purdue. It also gives Wisconsin its third night game of the season, a a previous total that was somewhat maligned upon the announcement of the ESPN/ABC and BTN TV schedules last month, especially considering the Badgers' relatively easy schedule.

Arizona State and Wisconsin have met three times, the most recent coming on Sept. 18, 2010. The Badgers won, 20-19, after safety Jay Valai blocked a fourth-quarter extra point that would've tied the game with barely more than four minutes to go.

Perhaps most importantly, the game will give us fans out East (relatively speaking, of course) a chance to get acclimated with the newly-redesigned Sparky. Back in March, ASU unveiled new designs for its mascot, which has gone generally untouched since the big-time Nike uniform rebranding in 2011. 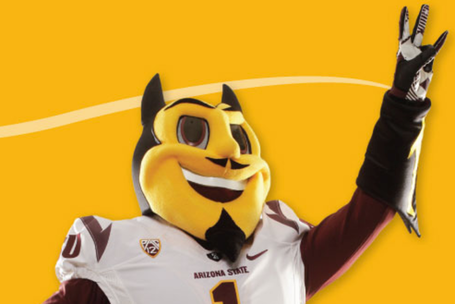 via House of Sparky

UPDATE, Thursday, 1:09 p.m.: Thanks to an ASU alum who reached out via email, I'm reminded that the Sun Devils did indeed scrap that creepy Sparky design for this one here. Apologies for not initially including the correct design.