Improved pass blocking would bode very well for a group of quarterbacks that has no clear starter entering the summer. We address the offensive line and red zone play in the second part of our series looking at the most pressing questions for 2013.

Share All sharing options for: Burning questions for Wisconsin football in 2013: Red zone offense and pass-protection

Will the Badgers become a four-down team in the red zone?

French-Russell sounds more like a breed of terrier than an effective kicking combination. That notion held true in 2012, when the two Wisconsin kickers, Kyle and Jack, made head cases of former head coach Bret Bielema and fans alike, going a combined 10-for-18 on attempts.

The two were so inconsistent in all aspects of the kicking game that Barry Alvarez and the Wisconsin coaches elected to split the kicking duties up at the Rose Bowl, having French kickoff and Russell attempt extra points and field goals (luckily, he never had a chance to attempt one).

French struggled so much in the early part of the season, especially when he missed a critical second field goal in a tight home win over Utah State, Bielema elected to yank his field goal duties and hand them to the freshman Russell. Russell showcased the genius of the move by promptly missing a field goal the next week against UTEP and then shanking a vital field goal on the road against Nebraska. 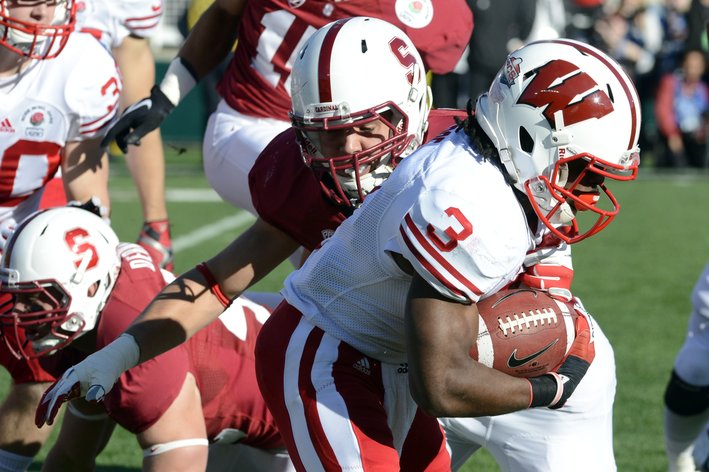 Among the most critical issues for UW are finding a No. 2 receiver and settling the quarterback battle.

There’s no doubt that French has the better leg strength, but that doesn’t matter when you aren’t accurate, or clutch, for that matter. Frequently during the Rose Bowl broadcast, Kirk Herbstreit and Brent Musberger brought up the fact that in four-down territory, the Badgers probably wouldn’t want to bring out their kickers. Why? Cue the last regular-season game of the year, when French shanked a 44-yard attempt wide left in overtime to lose the game against Penn State at Beaver Stadium. He had also missed his two previous attempts leading up to that point. And then he shanked a 44-yard attempt against Nebraska in the blowout Big Ten championship game.

And don’t forget the extra points! There were THREE separate games where a Wisconsin kicker missed an extra point, even though one was blocked. In the 12 games Wisconsin attempted a field goal, it missed at least one in eight of them.

This all made a difference in a season where the Badgers’ six losses all were decided by an average of four points, with four of the losses being decided by three points (in two of those three losses, the Badgers missed a field goal).

They’re called special teams for a reason. And with the Badgers' offensive line replacing two veteran starters in 2013 at the key anchor spots of left tackle and center, the Wisconsin offense may find it harder to score touchdowns in the redzone.

Can the offensive line get the job done in pass-protection?

Go back to last year’s film and watch the Badgers in pass-protection. For the most part, it’s absolutely terrifying. The offensive line allowed 27 sacks in 2012, the highest since 2008, when the team allowed 29 sacks (coincidently, the team went 7-6 and didn’t have a proven starter at quarterback).

And poor Curt Phillips. Sure, he might have held on to the ball a bit too long, but in his five starts he was sacked 10 times. Out of Phillips' 89 total dropbacks in 2012, he was sacked 10 percent of the time. It's also hard to measure the amount of times Phillips was harassed by pressure last season, but go back and watch the Penn State film and you'll see the issue.

Don't say those high numbers are because opponents blitzed more against Phillips because opponents didn't respect his passing ability. Joel Stave was sacked 10 times last season, three times against UTEP and Nebraska (his first two starts) and twice against Michigan State, with one ending his season. In the five games Danny O'Brien appeared, he was sacked eight times.

Those numbers still don't do justice for how poorly Wisconsin’s blitz pickup was compared to years past. Maybe fans were just spoiled with the 2010 and 2011 lines, because they made it look so easy. Still, this past season there were more instances of misreads on pickups. Often, two men would block one d-lineman while losing track of a blitzing linebacker. Or sometimes the Badgers would misread a stunt or a twist, allowing a blitzer a clean break at the quarterback.

If the Badgers want to get better in pass-protection, they'll need to see some young faces develop. With only two starters returning (I say only two because Kyle Costigan and Zac Matthias split time at guard) Wisconsin will need projected center redshirt freshman Dan Voltz to not only be a solid blocker, but a solid diagnoser of defenses. There will also need to be more solid tackle play. Ricky Wagner went from a favorite to win the Outland Trophy in 2012 to an afterthought, while Rob Havenstein struggled mightily with speed rushers.