In a heartbreaker, Wisconsin turned in a thoroughly stale effort that eliminated any shot at gaining an at-large BCS bid.

Your belly was likely plump with leftover turkey and stuffing, your heart content as you settled into the sofa to watch Wisconsin finish off an impressive 10-2 debut for Gary Andersen. It was at home and it was Senior Day and what else could go wrong?

Well, the Badgers’ rock-solid defense looked like a group of bros on the football field who had never played together. Joel Stave couldn’t nail the broad side of a barn. And this one game turned satisfaction into helpless disappointment as Wisconsin fell to a mediocre Penn State team, 31-24.

So the hopes of going BCS bowling are gone, and UW’s season will almost assuredly end in Central Florida, once the mark of a successful season but these days something less. Three consecutive Rose Bowls have a way of changing such perceptions. So let’s relive the agony and grade one of the Badgers’ ugliest games of the year.

Have we reached the point where we question if Joel Stave is really the long-term answer for Wisconsin? He’s got a season-and-a-half under his belt, and Saturday’s loss was a standard exercise in Stave frustration.

In the first quarter, the redshirt sophomore had a wide-open Jared Abbrederis down the right sideline and his throw landed a few yards out of bounds. That was on third down in a scoreless game, a play that very likely altered how the rest of the afternoon played out.

His first interception -- more of a fumble that never touched the ground -- was not entirely his fault. But Stave’s early fourth-quarter interception, which turned a 24-14 game into a 31-14 game, sailed a mile over Abbrederis’ head. That was a perfect example of how Stave hasn't made the strides I hoped he would this year.

When Melvin Gordon’s longest run of the day is 14 yards, the Badgers’ offense is probably in trouble. Their 120 rushing yards were the second-lowest of the season (105 against Ohio State) and it seemed like there was often nowhere for Gordon or James White to go but into a pile of burly men.

Penn State loaded the box and it worked for almost the entire game. Gordon had one crazy run near the end of the first quarter where he spun out of a tackler’s arms and switched direction to pick up the first down, but such highlights were few and far between.

The only reason this grade isn’t lower is a) a heavy portion of the blame falls on the offensive line and b) Gordon and White took just 26 carries combined. White found a way to make himself useful as a receiver with four receptions for 34 yards.

Nightmare fuel: BCS busted Troubles with the draw play Tumbling in the standings

Abbrederis ran his routes with the precision we’ve become accustomed to and routinely burned Penn State’s secondary. His 12 receptions were actually a career-high, and he could have had a few more catches for a lot more than his 135 yards if not for Stave’s consistent misfiring.

Jeff Duckworth pulled in a touchdown catch that gave Wisconsin its only lead of the game at 14-7, though he did have the only drop I counted in the fourth quarter. Redshirt freshman Alex Erickson had the best game of his young career with four catches for 49 yards.

There’s no way to sidestep it: Penn State’s defense laid a whoopin' on the Badgers up front.

Even some of Stave’s better throws of the afternoon, like his second-quarter touchdown pass to Duckworth, came with linebackers and defensive linemen breathing down his neck.

Jacob Pedersen deserves praise for his steady upward climb this season. Pedersen caught a few big passes against the Nittany Lions, like the 3rd-and-16 bullet in the second that kept the Badgers’ second touchdown drive alive. He had another 18-yard catch on 3rd-and-10 in the fourth, though it was immediately followed by an interception.

Also, Pedersen deserves an A for effort on this near-catch. 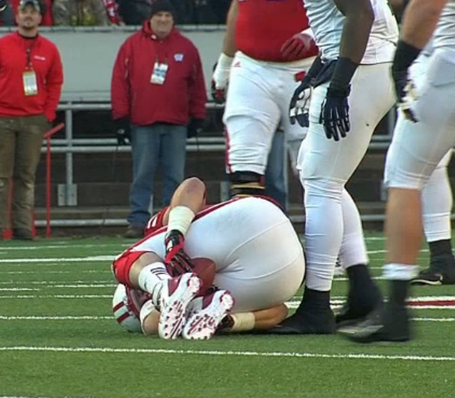 And yes, Brian Wozniak saved the best for last with those two touchdown receptions. If only we knew sooner that the 257-pound senior was sneaky enough to break away from the line of scrimmage unnoticed and wide-open for touchdown passes…

Did Andy Ludwig give up on the ground game when it didn’t work especially well in the first half? I understand you have to challenge Penn State’s defense through the air when it stacks eight guys in the box, but Wisconsin tried to play outside itself. It tried to assume the identity of someone else.

Ludwig only tried one jet sweep for Gordon, in the fourth quarter, and put the game in Stave’s hands. There was no choice but to throw all the chips in on Stave down three scores in the fourth, but it was too much throwing too early. This is not a team that succeeds when the quarterback throws the ball 53 times.

Penn State freshman Christian Hackenberg is a bright and promising talent. But Wisconsin’s defensive line only made his job easier by failing to regularly get a hand or body in his face. Nittany Lions running back Zach Zwinak, not exactly Melvin Gordon 2.0, broke out for a season-long 61-yard run that helped them burn even more clock in the final minutes.

The vaunted 3-4 system, which has been tremendously effective all year, crumpled in its last game. Beau Allen’s blocked field goal in the first was the line’s highlight of the game.

Chris Borland and co. seemed to run into a brick wall when attacking Penn State’s offensive line. Borland had 10 tackles and a half-tackle for a loss while Ethan Armstrong and Derek Landisch each had four tackles --- far from an impressive effort.

The Badgers can thank Tanner McEvoy for even having a chance in the fourth quarter. The transfer quarterback-turned-safety stepped in front of a surefire touchdown pass in the third quarter on not just any play: A play where UW had nine (9) defenders on the field. Yes, nine.

Nate Hammond also missed a big tackle on the Nittany Lions’ opening score as Hackenburg tore up Wisconsin’s man-to-man coverage early. Freshman Sojourn Shelton had a rough day, though he was flagged for a terrible pass interference call that resulted in another Penn State touchdown. They also totally forgot to cover Geno Lewis on the subsequent touchdown.

Jack Russell hit a 48-yard field goal, so that was nice. I’ve run out of energy to criticize anything else.