From the Other Side: Previewing BYU vs. Wisconsin

Share All sharing options for: From the Other Side: Previewing BYU vs. Wisconsin

1. B5Q: Wisconsin fans have had this weekend's game circled dating back Gary Andersen's hire, and probably even before then. We've been intrigued by the presence of a late-season non-conference game, Andersen's ties with Utah and the fact that in the midst of a second-half schedule that's pretty soft on paper, this is a big game.

What's the vibe out west among Utah fans? Is this a game you guys have been looking forward to?

Jeremy Mauss, Mountain West Connection: BYU fans are pumped for this game because they finally have some quality non-conference games in November, and they are not playing former WAC schools to fill out their late-season schedule. The Cougars have been playing great for the past six weeks and are very confident they have a shot at the upset against Wisconsin.

In general, they have been excited about the November schedule, which not only has Wisconsin but road games at Notre Dame and even Nevada is an intriguing option with its ability to put up points on offense.

Chris Taney, Vanquish the Foe: Well we can't really speak for Utah fans, but this is definitely one BYU fans had circled on their calendars as well. BYU fans travel fairly well and anytime the Cougars have a chance to visit a place like Camp Randall and experience that kind of atmosphere, it is something that gets fans excited. The fact that Wisconsin has a top-25 team this season and the Cougars haven't faced a Big Ten opponent in quite some time just adds to that excitement.

2. B5Q: Related to Andersen, are people out there tracking his first season at Wisconsin? What's his legacy out there, and has it been changed at all by this season at UW? 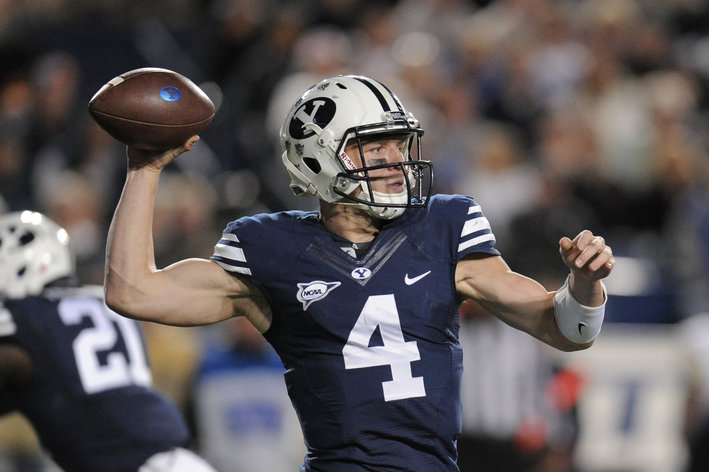 Jeremy: Utah State fans are probably keeping track of what he is doing and maybe some University of Utah fans, but overall it is not a big story amongst everyone here in Utah. His legacy falls into recruiting very well, which he did at Utah, and then he transitioned that to Utah State and made them a relevant program. Utah State had been consistently one of the worst programs in the entire country, but he was able to take it to back-to-back bowl wins, 10-win seasons and if not for a loss last year to Wisconsin or BYU, it would have made a BCS bowl last year instead of Northern Illinois. People around here realize that Andersen was equipped to take over a big-time BCS program based on how well Wisconsin has played this year.

Chris: Andersen's legacy here in Utah is that he was able to turn around a Utah State program that had been a dumpster fire for decades. He is well respected by BYU, Utah and Utah State's coaching staffs and by a majority of all three fan bases.

I think the biggest change since he has taken the Wisconsin job is he has changed the recruiting landscape here in Utah. In the past, BYU and Utah didn't have to compete with a Big Ten school for the top in-state recruits. With Andersen recruiting some of those kids to the Badgers, now they do.

3. B5Q: Offensively, what do we need to about BYU? What should we expect Saturday?

Jeremy: BYU wants to run a play as fast as possible and perhaps every 12 seconds is the goal, and the Cougars average around 5.7 yards per play and want to wear down opposing defenses. As for players, it all starts with quarterback Taysom Hill. He started off pretty bad to start the season by passing under 40 percent, but since then he has been well above 60 percent over the last five games. During that stretch, he is finding various receivers, including Cody Hoffman, who is one of the best receivers in the country.

The read option is also a big key to BYU's offense with running back Jamaal Williams, but Hill also is a very dangerous runner and he is averaging 105 yards per game. Hill is comparable to Braxton Miller but could be even a bigger threat on the ground. The past few weeks, BYU's offense has become less predictable with running nearly every time on first and second down and throwing on third. The offense is now doing swing passes, bubble screens and not using the diamond formation as its primary set. The versatility of this offense is what makes it hard to defend.

Chris: BYU's offense has been evolving throughout the season. It started very run-heavy at the beginning of the season with Hill and Williams putting up some unreal rushing numbers. The last two games, the Cougars have gotten a lot more balanced, throwing the ball over the place on Houston and Boise State while still running the ball successfully.

One thing you can definitely count on the Cougar offense is it will run a lot of plays. Offensive coordinator Robert Anae's mantra all season has been "Go Fast, Go Hard" and there is no question they have succeeded at the first part of that. BYU has been one of the top teams in the nation in plays per game all season and its 115 offensive plays versus Houston tied the NCAA record in that category.

Jeremy: The front seven is one of of the best in the country, and they have arguably the best linebacker in the country in Kyle Van Noy. This unit has a tendency to knock down a lot of passes with the defensive tackles and cause quarterbacks to be put under pressure. However, this Wisconsin front seven is likely the best they have seen, so this will be a unique challenge for the BYU defense.

That will not stop the defense to be continue to be aggressive up front as it normally is, and that is a necessity since the BYU secondary is its weakest unit. The pressure that the linebackers and linemen create allows the below-average secondary to look pretty good.

Chris: Defensively, the Cougars are very solid and have been for several years. BYU runs a base 3-4 defense with mostly zone coverages. The Cougars like to play very physical and their first priority is always to stop the run game.

The strength of the defense is definitely the linebacking core led by Van Noy. Expect Van Noy to disrupt plays all over the field and get several solid hits on the quarterback. The weakness of the defense is the cornerbacks. The Cougars lost their projected starters at both field and boundary corner before the start of the season. The replacements have done a decent job filling in, but remain the weakest point on defense.

5. B5Q: Could you give us one player on each side of the ball that could have a deciding impact on the game? Bonus points for under-the-radar guys.

Jeremy: The obvious choice on offense is quarterback Taysom Hill. If he runs for at least 75 yards and throws for 250, then BYU wins. However, a player who has the ability to create mismatches and has had one great game this year is wide receiver Mitch Mathews. He is a tall target at 6'6 receiver who averages 17 yards per reception, yet just averages about three receptions per game. He does have a three-touchdown game, but is sometimes the unforgotten receiver. If he gets involved more, that makes BYU's offense that much more potent.

On defense, I have to say Kyle Van Noy. He is always all over the field and has the knack to make big plays. Even if he doesn't have a big game on the stat sheet, he will require enough attention to open up other players to make big plays.

Chris: It's tough to go under the radar on offense with the way Hill has been tearing up opposing defenses the last few weeks. If Hill is firing on all cylinders, the BYU offense will be really difficult to stop.

On defense, the obvious choice would be Van Noy, but for this game we are going to go in a different direction. Senior safety Daniel Sorensen is the one player who could really make a difference for the Cougars against Wisconsin. Sorensen is excellent in run support and pass coverage and BYU will need a strong game from him in both areas to stop the Badgers' strong rushing and play-action attacks. Sorensen did suffer a nasty concussion in the Boise State game, but is expected to play this week. If for some reason Sorensen is unable to go Saturday, it would be a huge blow to the Cougars.

6. B5Q: Should we expect a lot of BYU fans to travel to Madison for this one?

Jeremy: There probably will be a few-thousand fans, maybe about 5,000 on the high end.

Chris: Like we mentioned earlier, BYU fans do travel fairly well. Some of that has to do with the fact that the Cougars have fans spread across the country due to the school being owned by The Church of Jesus Christ of Latter-day Saints. The LDS church membership isn't as nearly as large in Big Ten country as it is in California or Texas, so you may not see as much blue as schools in those areas, but you can expect a decent-sized BYU contingent.

Jeremy: BYU has lost its last seven games on the road against a ranked opponent, so this obviously will be a tough one. The Cougars have been playing as one of the best teams in the country over the past month, but I think Wisconsin's beefy offensive line will be able to neutralize BYU's great front seven. I see Wisconsin winning, but it will be a close game with Wisconsin winning, 31-24.

Chris: Well the key to the game for BYU is to keep the Wisconsin pass rush off Hill. We're going to be optimistic and assume the Cougars do that to pull off the upset, 27-24.