Wisconsin expecting much more than a mirror image against Minnesota

The comparisons between the Wisconsin and Minnesota offenses has been a hot topic leading up to the Badgers' biggest rivalry game of the season. There will, though, be plenty of new material for Wisconsin to digest before Saturday.

Share All sharing options for: Wisconsin expecting much more than a mirror image against Minnesota

MADISON -- Ethan Hemer can slow down Saturday. He can finally catch his breath.

After seeing many up-tempo offenses in recent weeks, the Wisconsin defensive lineman and his teammates will travel to play a Minnesota team that won't be hurrying to the line of scrimmage.

The Badgers can now expect more of a mind game -- more line checks, hard counts and audibles designed to throw opposing defenses out of whack.

"There's a lot more adjusting to be done," Hemer said. "I personally enjoy it. I think we'll handle it just fine. I think that we have a good game plan in place, but what it's going to come down to is, man-on-man, who's going to win the fight?"

The Gophers' offense can be similar to Wisconsin's. There won't be many gimmicks, simply strategy designed to take advantage of mismatches and defensive alignments.

In that sense, the Gophers' offense can be similar to Wisconsin's. There won't be many gimmicks, simply strategy designed to take advantage of mismatches and defensive alignments.

But how real are this week's comparisons between the two offenses? When digging deeper, plenty of quirks appear that the Badgers' defense hasn't seen day in and day out in practice.

Minnesota runs many jet sweep plays, for instance, the kind Wisconsin and Melvin Gordon have busted explosive plays out of all season.

"Seeing Melvin all camp off the fly sweep gets you ready to see it in a game," linebacker Ethan Armstrong said. "You have an idea of how you need to defend it. I think we're preparing to stop it, preparing to go out there and shut it down."

Armstrong and the Badgers know, though, that what they're seeing on film this week is much more complex than what they're familiar with.

While Wisconsin uses the jet sweep as a change-of-pace formation, the Gophers see it as a staple of their offense with many variations of where the play will eventually flow.

"When you look at the games that they've won, in that winning streak, tied in with that is the jet sweep," Aranda said. "Earlier in the year, you didn't really see it. In the Iowa game and some of these other games, I think it was a much more Wisconsin-based downhill, but since they've been winning, the jet sweep has been there first and foremost. That's a big part of their success in their run game."

Although he has found similarities -- particularly in the play-action passing game -- Aranda said he's discovered more differences between Minnesota's offense and the Badgers' than he may have originally thought.

It starts with the basic way Minnesota attacks defenses. Aranda said the 25th-ranked Gophers are "plus-one" in everything they do in the running game, meaning they always want one more blocker than the defense can handle at the point of attack.

The start of something beautiful 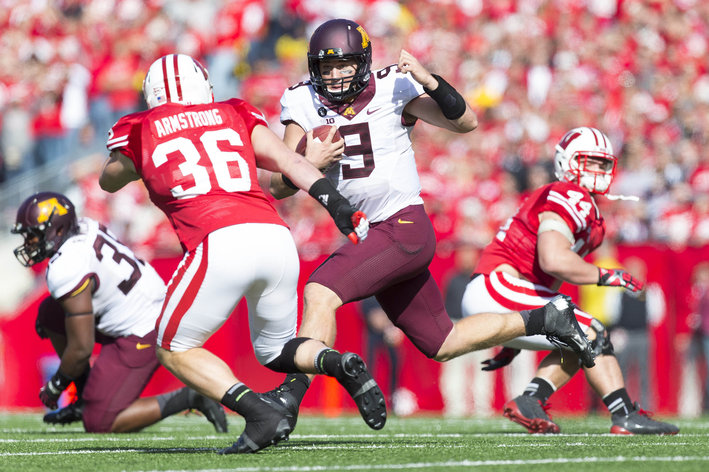 The Wisconsin-Minnesota rivalry is about to get really fun, so embrace the excitement, not the hate.

"Everything they do is plus-one, so the numbers are clearly in their advantage, and they give you a lot of formations and shifts," Aranda said. "That's the No. 1 thing to identify about their scheme. From there, you've got to be able to build in simple and sound adjustments so that you're not outnumbered."

It's easier said than done, seeing that Minnesota boasts a top-20 rushing offense nationally and a mobile quarterback that can free up an extra blocker.

Aranda said many teams have tried to "flex their muscles" and bring pressure to try to balance out the numbers, but all it takes is a power play away from the blitz to gash a defense for a long gain.

It only makes it more difficult when 225-pound David Cobb and 235-pound Rodrick Williams Jr., are the ones taking handoffs out of the backfield.

"The running backs are big, physical kids," Armstrong said. "They make you miss. They're going to run through arm tackles."

Aranda said avoiding 3rd-and-short will be key Saturday, as that's where Cobb, who has averaged 5.4 yards per carry and scored seven touchdowns this season, excels.

Minnesota only averages 149.4 passing yards per game, but shorter third downs will also open up the Gophers' dangerous play-action game.

For the Badgers, it'll start with making sure they aren't outnumbered on first and second down. As Minnesota tries to finish strong in a turnaround season, Wisconsin knows stops won't come as easy as they did in recent years.

"They've improved a whole lot," Armstrong said. "I think the biggest thing is, they're a team that believes. They're playing with a lot of confidence right now, and that shows. They have almost a little bit of a swagger to them when they play.

"They've always been assignment sound, their offense has always kind of done this, done that. But right now, they're playing confident. They're playing with enthusiasm. Not that they didn't before, but there's a little more there."