Wisconsin vs. Minnesota preview: The Battle for Paul Bunyan's Axe

The Badgers are facing a team firing on all cylinders and with a week to heal. Can the keep the Axe in Madison?

Share All sharing options for: Wisconsin vs. Minnesota preview: The Battle for Paul Bunyan's Axe

For Minnesota, this game means everything. It's Senior Day. It's Axe Week. It's the first time in a while the Gophers have been able to legitimately conceive of beating the Badgers without some sort of Welcome-to-Night-Vale-ish disaster befalling integral parts of the Badgers.

They're coming. And it looks like they're going to bring their best.

But on paper, the Badgers match up very well against this iteration of the Gophers. I mean, there's a reason why the Badgers are currently situated as 16 1/2-point favorites going on the road.

How Minnesota has gone on another four-game winning streak has stemmed from the fact that it's gone out and used some old school Wisconsin tactics to get wins. The Gophers have taken care of the ball, they've played as slowly as possible. And they've run. A lot. 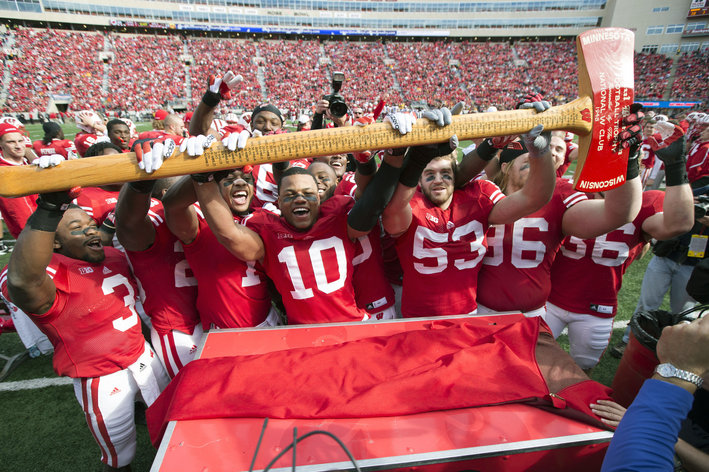 Wisconsin has held Paul Bunyan's Axe for nine straight years, but Minnesota's turnaround season makes Saturday one of the biggest games in the rivalry since the Gophers' last victory in 2003.

They're averaging more attempts than Wisconsin on the ground. In fact, they've run the ball 74.2 percent of the time on offense. David Cobb needs just 58 yards to crack the thousand-yard barrier. If Rodrick Williams Jr. is healthy, he'll provide a second thumper that will help attempt to crack the Badgers top-10 rush defense. Minnesota also uses a two-quarterback system. Philip Nelson will likely get most of the time, but Mitch Leidner's going to get some time running the ball as well.

Why are the Gophers going to run so much? Because Leidner and Nelson have struggled throwing the ball. Sure, they were able to get theirs against Indiana. But everybody's been able to get something against that defense. Put it another way: they've only got six scores against five picks if you take away their outlier.

But again, that's not what they want to do. They're winning despite being the 116t- ranked passing offense. They might even have all three of their starting pass-catchers be freshmen. Derrick Engel hurt himself at Sunday practice and his status is up in the air. So you can expect that tight end Maxx Williams and wide receiver Drew Wolitarsky may be joined by athletic quarterback recruit Donovahn Jones in terms of who catches passes.

What does this mean for the Badgers? Well for one, I don't think Minnesota's going to score a lot of points this week. It was bottled up running against Iowa and Michigan, and neither one of those teams has been as dominant as Wisconsin against the run. Not to say that the Gophers aren't going to attempt to run the ball 40 times. But this is the best run defense that the Gophers have faced all year. Wisconsin's allowing just under 100 yards a game and just over 3 per carry. And if Chris Borland and Michael Caputo have their standard days, this game could be over quickly.

Why? Because on a per-play basis, Minnesota's defense isn't great at things. It's allowing 5.76 yards per play, which is good for a tie for 78th. And here's the lead that I've buried that will make Badger fans smile: the Gophers' 4.44 yards allowed per rush are good for 81st in the country. That's right. We have a strong chance of seeing the sixth game where James White and Melvin Gordon both go over the century mark.

That's no sleight on Minnesota's defensive line, though. The Gophers have some good pieces in their front four. Theiren Cockran has been a killer pass rusher, garnering 6 1/2 sacks on a defense that's only generated 15. Ra'Shede Goodman is a space eater at 6'6 and 310 pounds. Not everything's going to be that easy. But you remember the rule of the Indiana game, right?

See, because while Minnesota's made fewer tackles than Indiana, it has Brock Vereen and Cedric Thompson among its leaders in tackles. In fact, if Thompson didn't miss the Western Illinois game, he'd be the Gophers' leader in tackles. Suffice it to say, there are going to be openings in the running game.

As far as the passing game goes, it may just be another matter of weather. The Gophers are completely average against the pass, The opportunities are there for Jacob Pedersen and Jared Abbrederis to make plays. Only real question is just how windy it's going to be at game time.

Well, that, and can Minnesota find a way to bottle up the best running game it'll face all year. Because if it can't, it could be a very long day for the Gophers.