Wisconsin has held Paul Bunyan's Axe for nine straight years, but Minnesota's turnaround season makes Saturday one of the biggest games in the rivalry since the Gophers' last victory in 2003.

MADISON -- It didn't take long for first-year Wisconsin head coach Gary Andersen to learn the significance of the Badgers' long-standing rivalry with Minnesota.

During Andersen's first day on the job, former coach and current Director of Athletics Barry Alvarez took him on a tour of the program's facilities, when he first saw Paul Bunyan's Axe.

"You see the axe sitting there in its trophy case," Andersen said. "It doesn't take you long to look at it and see how important that is."

Getting to know Minnesota 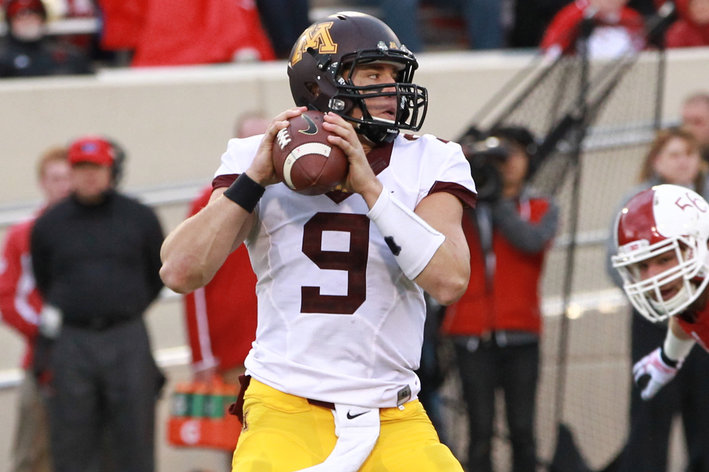 Paul Bunyan's Axe is on the line this weekend as the Badgers head to Minneapolis to take on the Golden Gophers, one of the hottest and most surprising teams in the nation.

The Gophers have lost nine straight against Wisconsin, the last three coming by three scores or more. Both teams are ranked heading into the rivalry game for the first time since 2005 and only the third time since 1975.

"We love it," senior linebacker Chris Borland said. "That adds a lot to it and makes it even more meaningful."

Minnesota (8-2, 4-2) enters the FBS's most-played rivalry (123 meetings) ranked 23rd in the USA TODAY Coaches Poll and 25th in the BCS after winning 12 games over the last three years combined.

With a turnaround season in full force and a four-game winning streak intact, Saturday looks to be one of the best chances to take the axe back after surrendering it in 2004.

"No one on that team has had a chance to have the axe, so I'm sure that's something they're preaching over there -- ‘Get it back. Get it back for Minnesota,'" quarterback Joel Stave said. "They're going to prepare hard, and I'm sure they're going to be a very motivated team when we play them."

Andersen said Monday that he'll continue the tradition of having an assistant coach present the history of the rivalry to the team this week. Director of Player Personnel and External Operations Henry Mason was handed that responsibility this year.

Borland also said he expects Wisconsin-Minnesota highlight reels to be playing on the televisions inside the Badgers' facilities all week.

"We'll do a lot of things during the week to make sure the young kids can wrap their arms around it and understand what this rivalry's about," Andersen said. "The young kids need to understand the tradition -- how important it is for the kids on this football team, how important it is for all of the Badgers. It matters, and they need to learn quickly what it's all about."

Wisconsin heads into its final two games with aspirations of playing in a fourth straight BCS bowl game. Minnesota could still win the Legends Division and play for a Big Ten Championship.

It creates added implications to a rivalry that doesn't need them to be special.

"Rivalries that have gone on for this long have so many stories behind them and so many moments behind them," Andersen said. "It's what's great about college football, in my opinion.

"We all know in rivalries like this, it's a one-game championship, and it's three hours and whatever minutes to get it done. Trust me, I understand the importance of rivalries. I'm excited to be a part of this one."

-- Andersen said center Dallas Lewallen, who has missed the last two games with a leg injury, will "move around" Monday.

"We'll see how he gets out," Andersen said. "I sure hope he has a good day. [Dan Voltz] played very well at the center spot. I was proud of him. It'd be nice to have that depth, though, so we'll see."

-- Andersen on what he would be thinking when trying to tackle James White in the open field: "Probably how I'm going to explain the missed tackle. Don't get too embarrassed on film. If it was me personally, I'd have no shot. I couldn't tackle that guy in a phone booth, let alone the open field."

-- Andersen said linebacker Derek Landisch was very active against Indiana, and the play he made at the goal line was a "big-time" play. He also praised the production and versatility of Landisch and Conor O'Neill after both played inside linebacker late in the game when Chris Borland was taken out.

-- Andersen had high praise for true freshman running back Corey Clement on Monday, complimenting his ability to stay prepared mentally while not knowing what his role will look like week to week.

"He's the full package," Andersen said. "I'd say I haven't been around a young man that is that well-rounded mentally and physically at his young age."

-- Andersen said this is the time of year he becomes concerned with freshmen "hitting the wall."

"I just always lean back on the same statement that I tell the kids all the time," he said. "We all start something. Every single day, we start something. If you can sustain it, and you can maintain, you have a chance to be good. But only the elite can finish, and that's the challenge for all those young kids right now and this football team."