The running arsenal was in full effect Saturday afternoon as Wisconsin rushed for the second-most yards in school history.

Media and fans expected some form of an offensive shootout between the high-powered offenses of Wisconsin and Indiana Saturday afternoon. But with the weather making the field conditions sloppy and hampering a potent Hoosiers passing game, the Badgers rolled on the ground, starting with running back James White's 93-yard scamper on Wisconsin's first play from scrimmage. With 545 yards total and three (almost four) players going over the century mark, Wisconsin presented itself as a team to be reckoned with in the 51-3 victory.

Passes: 19 (including the sack on Joel Stave, and the "backward laterals" to White, Jared Abbrederis, and Alex Erickson)

5.5: Yards per play against BYU

10.4: Yards per play against Indiana

11.1: Yards per rush against Indiana

7: Number of rushes by Wisconsin of at least 30 yards against Indiana

73: FBS teams that had less than rushes of at least 30 yards on the season entering Saturday

2: Number of touchdowns for Abbrederis -- both rushing

1: Catch by the rest of the Badgers' receivers (Jeff Duckworth)

0: Number of turnovers by Wisconsin

1: Number of sacks given up by Wisconsin

37:45: Time of possession for Wisconsin

3-of-6: Red-zone conversions by Wisconsin into touchdowns

1. Running game. Pretty obvious, but Wisconsin, from its first play from scrimmage on its 7 yard line, wanted to dominate the line of scrimmage against the Hoosiers. 554 yards later, off of the same bread-and-butter plays that have made the Badgers' offense run smoothly as well as a few new wrinkles (including an Abbrederis end-around off a fake Gordon end-around). White, Gordon, Clement, and yes, even Abbrederis got in on the action.

Kudos to the offensive line, which many thought might be an issue after injuries increased and head count decreased during fall camp. Center Dan Voltz again filled in more than sufficiently for the injured Dallas Lewallen. Even a highly-touted Badgers recruiting target was impressed with the running game today:

My boys from Wisconsin going crazy what a run!

2. Big plays. Seven rushes over 30 yards on the game, plus a huge 61-yard pass from quarterback Joel Stave to Pedersen in the third quarter showed the offensive firepower Wisconsin can bring against a defense like Indiana.

3. Blocking by offensive players besides linemen. On White's 93-yard run in the first quarter, Erickson ran with White and made sure other Hoosiers defenders did not come close to taking down him before the goal line. Pedersen threw a couple key blocks on touchdown runs. White himself had a key block on Abbrederis' second touchdown run late in the third quarter. Plus, fullback Derek Watt continues to open holes and wreck opponents out of the I-formation.

Three backs over 100 but all the credit goes to the guys up front, TE's, FB and the WR' blocking down the field. Much appreciated. #wisONsin

4. Pedersen. In general, he's become the second option besides Abbrederis, and Saturday, he led the team in catches with three. In the past three games, he has actually caught more passes than any other Badgers receiver (12 -- Abbrederis has 11). Along with his blocking skills, look for him to be among the favorites for the Kwalick-Clark Big Ten Tight End of the Year award, and also to play on Sundays next year.

What went wrong/not as well

1. Third-down conversions. One thing to note would be the low 3-for-10 conversion rate. It did not affect the Badgers with such a staunch lead from the opening quarter, but Indiana did make some adjustments. The Gophers' defense will be tougher.

2. Red-zone touchdowns. Being picky here, especially with Russell converting all three of his field goal attempts and Wisconsin scoring on nine of its 12 possessions. But the Badgers got the ball across the goal line on just half of their opportunities within the 20. It should be interesting to see if that will make a difference next Saturday in the Twin Cities.

Final thoughts: A look at respecting variations of the fly sweep

Below is a third-down attempt late in the third quarter, one that ended in a stop for the Hoosiers. 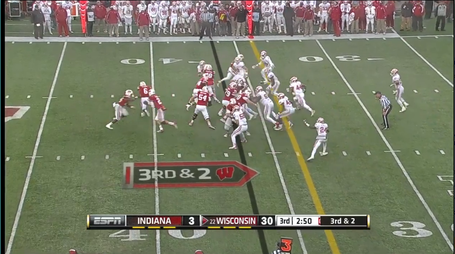 Note how the defense sells out for both the fly sweep to Clement but also the power run to Gordon on the left side, leaving no one on the right side of the play. Offensive coordinator Andy Ludwig had to have noticed it, as on the next drive, a hint of misdirection ensued, as the Badgers faked an end-around to Gordon left, but Stave handed the ball off to Abbrederis, who took the ball and ran untouched 49 yards for the touchdown. 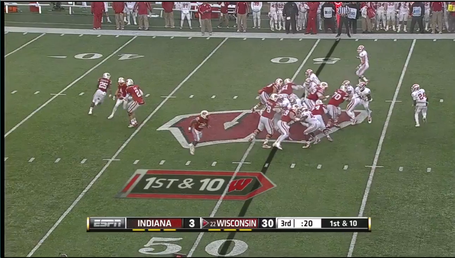