MADISON -- The country's ninth-ranked scoring offense may take a step back this week, and not entirely because of Wisconsin's top-10 defense.

It's a big blow for an Indiana offense that has scored at least 28 points in every game this season, especially considering Coleman rushed for 215 yards and two touchdowns on just 15 carries last week against Illinois.

Getting to know Indiana 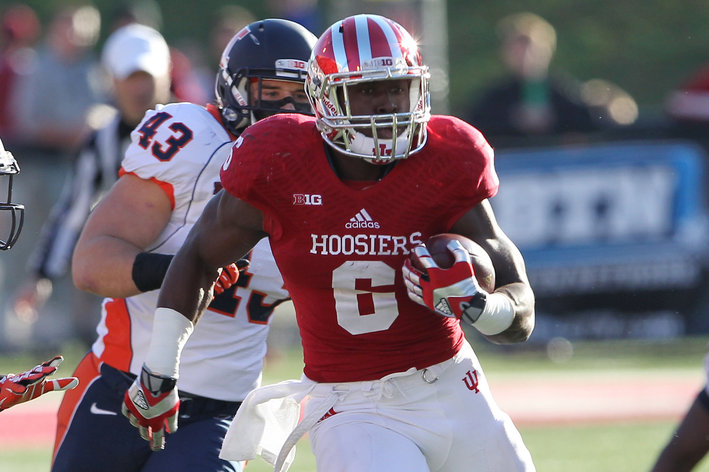 Coleman has established himself as one of the best big-play backs in the country. He has eight runs of 40-plus yards this season and five of 50-plus, both of which are more than any other player in the FBS.

Still, Andersen said it wouldn't change the way the Badgers prepare for this week's game.

Much of that belief has to do with Coleman's replacement, senior Stephen Houston, who has actually equaled Coleman's 7.3-yard average on 58 less carries this season.

"They've got other explosive backs," linebacker Chris Borland said. "Houston's a good player, so it won't change what we do. It may make things a touch easier, just not having to go against a great player, but everything will still be the same."

Not the same old Hoosiers

It would be easy to see why Wisconsin would look past Indiana this weekend.

The Badgers have beaten Indiana eight straight times and have won by an average margin of 54.3 the last three seasons.

Previous years don't matter to Andersen, though, and he believes watching tape on Indiana from this season will give his players plenty of reason to respect the Hoosiers' talent.

"I think the tape will speak for itself," Andersen said. "Every week, we talk to them hard and heavy to understand who their opponent is. Football is year-by-year, and Indiana's done some really nice things this year."

The Hoosiers, with a 4-5 record, are also a team battling for bowl eligibility, and with Ohio State next on the schedule, they'll likely come into Camp Randall with a must-win mentality.

Despite the losing record, too, Indiana's only loss by more than two scores this season came against Missouri, now a top-10 team.

"(They've) have had some tough losses," Andersen said. "They've been in games all the way through. They've scored at least 28 points each week, and if that doesn't make you stand up and grab your attention as a defender, then nothing will. On the defensive side of the ball, those kids are playing hard, they've got a good scheme and week in and week out they continue to battle.

"I think our kids will be ready and have great respect and understand that it's every week that you've got to prepare."

It appears center Dan Voltz may need to make one more start for the Badgers.

The redshirt freshman replaced Dallas Lewallen against BYU, and Andersen said Monday that Lewallen, at least, won't be ready for Tuesday's practice.

"It's early, obviously," Andersen said. "The progress that we made through the weekend is good, but not to the point where we're saying he's going to go out there and be ready for a Tuesday practice."

-- Andersen handed out praise to safety Michael Caputo for his play against BYU. He also said Dezmen Southward and Nate Hammon did an exceptional job coming up and playing man-to-man on the Cougars' taller wide receivers.

-- Andersen said the team has been looking for tight end Jacob Pedersen more in the passing game. The senior has 16 catches and two touchdowns over the last four games and is now the Badgers' second-leading receiver after Jared Abbrederis.

-- Although running back Melvin Gordon's production has dropped off the last two games, Andersen believes he's getting better every week in pass protection and at catching the ball consistently.

-- Even though Jack Russell's field goals against BYU were both under 40 yards, Andersen said it helped him build confidence in the sophomore kicker.