Share All sharing options for: Wisconsin football schedule: Getting to know Indiana

Before heading to Madison, BYU was the nation's 12th-ranked offense. Against Wisconsin's defense, the Cougars managed less than 142 yards below their season average. This week, Wisconsin's defense will once again be tested as Indiana's high-powered offense comes to town for a Big Ten matchup at Camp Randall Stadium.

The Hoosiers have yet to win a road game this season, so the Badgers can expect a hungry and motivated opponent Saturday morning. Below are three elements to keep in mind as kickoff approaches.

Indiana's sophomore running back Tevin Coleman is third in the Big Ten in rushing yards per game with 106.4. Much of his success this season has come via what Indiana calls its "truck play."

Last week in the Hoosiers' 52-35 victory over Illinois, both of Coleman's touchdowns came off of this play call. He scampered for a 64-yard touchdown in the first quarter to get the scoring started before a 75-yard touchdown to put the game away. This is what the play looks like: 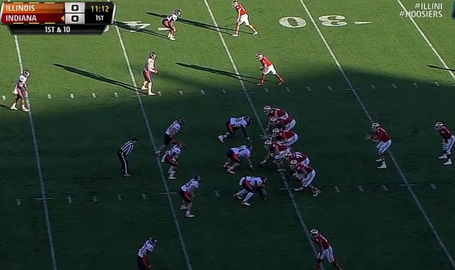 After completing a pass to pick up a first down, the Hoosiers used the hurry-up to keep the same Illini personnel on the field. 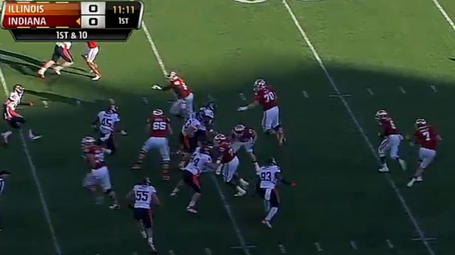 According to Illinois defensive coordinator Tim Banks, the play involves a pulling tackle and a pulling guard. Here, we see lineman Jacob Bailey (No. 70) pulling as soon as Coleman gets the handoff. 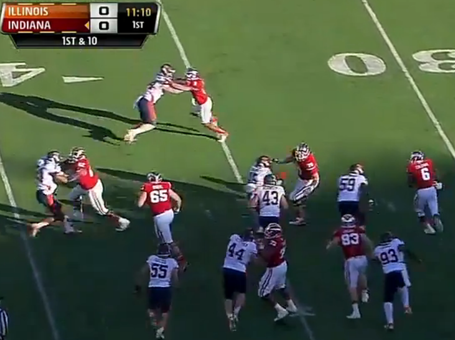 With Bailey picking up his block, tackle Ralston Evans (No. 62) picks up his block at the second level as Coleman begins to cut the corner. 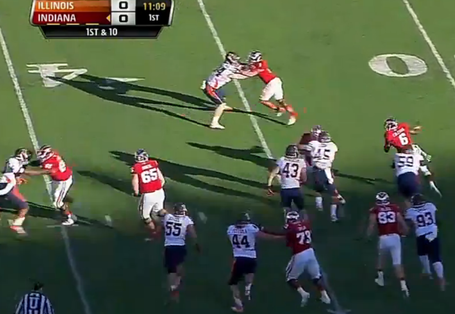 Bailey's block is key here, as he seals off the defender from pursuing Coleman and stopping the play for no gain. This is when lineman Wes Rogers (No. 65) releases from his block and begins to head upfield. 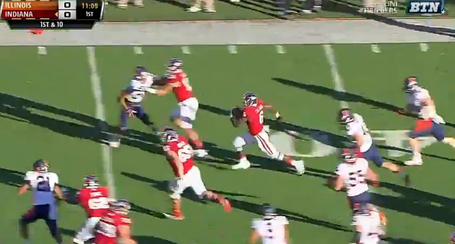 With Coleman beating the defender to the outside, he can now head upfield where his receiver and lineman are out in front of him and ready to pick up extra blocks if needed. Fortunately for the Hoosiers, Coleman's speed takes over and he goes 64-yards for the score.

Now here's a look at the same play call, but this time from a different angle and from the 75-yard touchdown in the fourth quarter. 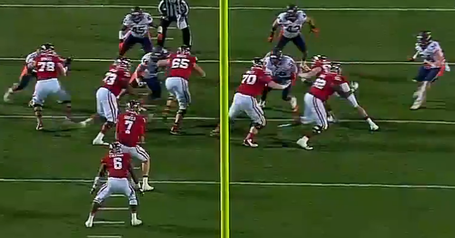 The ball is snapped out of the pistol formation. 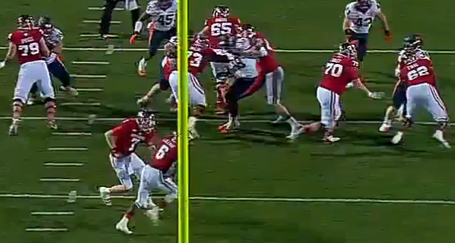 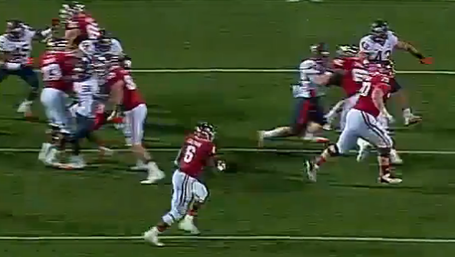 Coleman has the opportunity to cut upfield, but his patience and trust that his blockers will be where they are supposed to be if he rushes are parts of why this play is so successful.

Evans and Bailey again pick up their blocking assignments and an even bigger hole is created for Coleman. 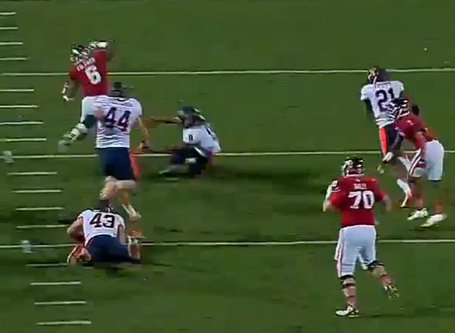 On this particular play, with Illinois having seen this before, Coleman has to break one tackle before it is clear sailing to the end zone. Come Saturday, the Badgers will be looking for this "truck play" from the Hoosiers -- one that has helped Coleman average the 8.7 points per game, second-highest in the Big Ten, excluding kickers.

The Hoosiers, despite their subpar 4-5 (2-3 Big Ten) record, own the second-most prolific offense in the conference behind Ohio State. They average 43.1 points, picking up 24.4 first downs and tallying over 527 yards per contest.

Last season, Cameron Coffman led Indiana to a record of 4-8 (2-6). At the beginning of this season, Tre Roberson was named the starting quarterback. Now, Nate Sudfeld is the team's leading passer, completing 61.6 percent of his passes and averaging 242.4 passing yards per game (fourth in the Big Ten) with 19 touchdowns.

Roberson still sees playing time, as he has appeared in all nine games while completing 48 of 81 pass attempts and throwing nine touchdowns.

On the receiving end is 6'3 junior wide receiver Cody Latimer, who is second in the Big Ten in receptions per game and third in the conference in receiving yards per game, averaging 6.1 and 98.2, respectively.

Latimer is the team's top receiving option, but not by a big margin. Latimer (eight), Shane Wynn (seven), Kofi Hughes (six) and Ted Bolser (five) all have caught multiple touchdowns. In comparison, Jared Abbrederis leads the Badgers with six touchdowns, and the next closest is Jacob Pedersen with three.

Indiana has been held under 35 points just twice this season, scoring 28 in both. The Hoosiers have also scored over 42 points in five games. Only eight teams, five of which are in the top 10 of the AP poll, have scored more points this season than the Hoosiers.

When a team has a top-10 offense and doesn't even have a winning record, there's not a great deal of investigation required. Indeed, the Hoosiers' underperforming defense explains their downfall this season.

A modest 110 teams across the country allow fewer points per game than the Hoosiers (37.4). The Hoosiers have allowed 45 or more points on five separate occasions this season, and Michigan put up a cool 63 on the worst defense in the Big Ten -- including Purdue.

It's not just points that have done the Hoosiers in so far this season, as they allow the most passing yards per game (301.7) in the Big Ten and the second-most rushing yards (217.4). With the Badgers averaging a humbling 206.3 yards per game through the air (seventh in the Big Ten), expect that number to rise as Indiana has allowed 325 passing yards or more in four of their five Big Ten games this season (Michigan State, 235 yards).

As for James White and Melvin Gordon, it's safe to say that the two will be doing this a fair amount Saturday.

With just four games remaining on the schedule and a lot of ground to make up in the BCS standings, the Badgers cannot afford to take any opponent lightly. A meeting with Minnesota (8-2, 4-2) lurking around the corner could set the Badgers up for a letdown against Indiana if they're not prepared.

But then again, does that sound like something Gary Andersen would allow?