Wisconsin has played its fair share of explosive offenses early in the season, but Saturday's test against No. 19 Northwestern won't give the Badgers' defense any time to relax.

Share All sharing options for: Northwestern's Venric Mark, 2-quarterback system could cause headaches for Wisconsin defense

The Badgers' defense will have all it can handle when 19th-ranked Northwestern visits Camp Randall StadiumSaturday afternoon. The Wildcats, who are averaging 39 points per game this season and have scored at least 30 every week, can beat a team in a variety of ways, and Wisconsin is trying to prepare for them all.

"So they do a lot of different things. It's challenging to defend that as a defense."

"He can get out of the pocket and do some really good things," Southward says. 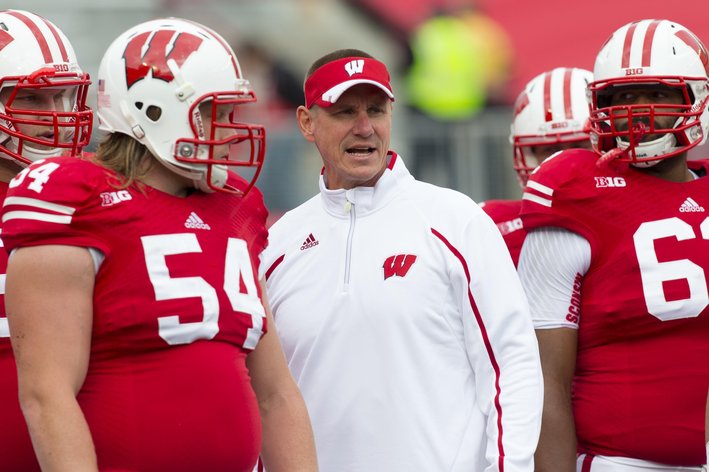 Gary Andersen talked earlier in the week about how the Badgers will prepare for yet another two-quarterback offense.

At 6-foot-3, 210 pounds, though, Siemian is the more prototypical, drop-back passer between Northwestern's two signal callers. He's completed 68.2 percent of his passes for 916 yards with six touchdowns and three interceptions on the year, along with averaging an impressive 10.4 yards per attempt.

When Siemian's in the game, Aranda said nearly 50 percent of his snaps include a five-step drop, as opposed to just 20 percent for Colter. It turns the Wildcats' offense into more of a pro-style look, with traditional power running plays mixed in with downfield passing.

The zone-read and option plays dwindle, but don't disappear, and the Wisconsin defense will still need to be aware of the possibilities when both quarterbacks share the field.

"They use them as they need to," Armstrong said. "When (Siemian's) in, he's throwing the ball all over the field. He's making the widest throws. He's taking what the defense gives him."

When Colter's under center, the Wisconsin defense must be ready for anything. Aranda explains that option plays replace the 30-percent drop off in five-step-drop snaps for Colter.

This could cause headaches for any defense, especially when offensive production doesn't seem to fall off at all when one quarterback subs in for the other.

"Any time you have two quarterbacks that can go back there and run the offense as efficiently as they do, it's going to be a tough offense to go against," Southward said.

Colter doesn't throw downfield like Siemian does, but Colter has proven he can move the ball through the air. He's completed 39 of 47 passes this season, an 83-percent clip that's impressive even when considering his 39 completions have only accumulated 362 yards.

He's added 253 yards and four touchdowns on the ground, and he even caught a 9-yard touchdown pass from Siemian.

The Badgers' elder statesmen remember Mark from Wisconsin's 2010 game against Northwestern in Madison.

Despite a 70-23 Wildcats loss, the then-freshman had 273 kickoff return yards in Camp Randall, including a 94-yard touchdown.

"He's got incredible speed and quickness, and he's a little bit more powerful than you think. He will run through tackles." -Ethan Armstrong on Venric Mark

"That's a true freshman that did that against us," Armstrong said. "He's quite a remarkable player, an All-American returner. He's got incredible speed and quickness, and he's a little bit more powerful than you think. He will run through tackles."

Mark, who stands 5-foot-8 and weights 175 pounds, didn't receive a single carry during that 2010 game. Saturday, Wisconsin will have to worry about the senior running back making plays all over the field.

Mark rushed for 1,366 yards and 12 touchdowns last season. He has missed four of Northwestern's six games this year, but he looked 100 percent in his return last week against Ohio State.

"He's a guy that pops when you look at him on film," Southward said. "If you take your eyes off him for one second, he'll be behind you. He can obviously split out at slot, he can play in the backfield and really make explosive plays. He's really big-time in the return game. He's legit. He's a really, really good player."

No matter which quarterback the Wildcats trot out each series, the Badgers will always need to keep an eye on Mark.

Wisconsin has already played a couple explosive offenses in the first half of its season, but one could argue Saturday could be the Badger defense's toughest test yet.

"I think Northwestern has a very talented, deep offense," Wisconsin defensive end Ethan Hemer said. "They've got a lot of playmakers, a lot of guys that can move the ball around and spread guys out and make plays.

"It's going to be an enjoyable challenge to try to contain these guys."