After their first bye of the season, the well-rested Badgers host Northwestern in Wisconsin's lone home game of the month. Here's what you need to know.

Share All sharing options for: Wisconsin football schedule: Getting to know Northwestern

While the Wisconsin Badgers were taking advantage of their bye week and getting some much needed rest, the Northwestern Wildcats were playing host to fourth-ranked Ohio State on national television. As was the case with the Badgers and their game against the Buckeyes, Northwestern had its chances to pull off an upset, but fell short in the final minutes of the game, losing 40-30.

A Buckeye defeat would have fueled the Badgers' Rose Bowl prospects, but the game helped to prepare Wisconsin for what to expect next Saturday. In advance of homecoming weekend's battle between Wisconsin and Northwestern, here are three major factors to keep in mind:

Two of a kind

The saying goes that if you have more than one quarterback, you actually have no quarterback at all. Well, Northwestern thinks that's nonsense.

Kain Colter and Trevor Siemian both take snaps under center for head coach Pat Fitzgerald and his Wildcats offense. Siemian is the more traditional quarterback for the Wildcats, as they look to pass more when he is in the game. On the season, Siemian is posting a 68 percent completion rate, 916 yards, six touchdowns and three interceptions for a Big Ten-leading quarterback rating of 171.3. In the game against Ohio State, Siemian was 13-of-18 for 245 yards, two touchdowns and one interception.

The interception came at a crucial point in the game with Northwestern leading 23-20 early in the fourth quarter before Buckeye cornerback Doran Grant stepped in front of a pass intended for Rashad Lawrence and returned it to the Northwestern 16-yard line, setting up a 2-yard Carlos Hyde touchdown run to give the Buckeyes the lead.

Colter is the Wildcats' dual-threat option quarterback. When he is in the game, offensive coordinator Mick McCall looks to call more read-option to make opposing defenses think. Colter is 39-of-47 on the season (82.9 percent) for 362 yards, three touchdowns and two interceptions combining for a quarterback rating of 160.2. In the game against Ohio State, Colter completed all 12 of his passes for 98 yards. He ran for a touchdown and caught one. That's right, he plays wide receiver as well.

Arguably Northwestern's most athletic player, Colter reportedly spent 30 percent of his practice time on Tuesday and Wednesday of Ohio State week taking reps in the slot. The practice time paid off, as Colter caught a touchdown in the first quarter to give Northwestern its first points of the game.

Part of the trouble that Ohio State had against the Wildcats in the first half was that Colter would carry the team's fast-paced, no-huddle offense down the field and then once they got into OSU territory, Siemian would come in and change how the Buckeyes had to play defense. Instead of concerning themselves with the option read and short passes, the Buckeyes had to shift their focus to the deep ball while at the same time concerning themselves with Colter running underneath routes from the slot.

Wisconsin has yet to face a team with multiple quarterbacks, and the contrasting styles of Colter and Siemian will not make it any easier. If the Badgers can jump out to an early lead, which is possible as Northwestern is only averaging 6.2 points per game in the first quarter, then the threat of Colter and the read-option could be diminished as Northwestern will look to pass more often.

Aside from Ohio State, Northwestern has not played another ranked opponent so far this season, yet the Wildcats rank 87th in the country in total defense. Northwestern has allowed 21 or more points in all of its games so far this season (it held Western Michigan to 17). Every team in the Big Ten, aside from Illinois (once), Indiana (once), and Purdue (once) has held its opponent to less than 20 points at least twice.

Part of the problem for the Wildcats is how they line up their secondary. Ever since starting cornerback Daniel Jones went down with a left knee injury in the season-opening victory against California, redshirt freshman Dwight White has stepped in to fill the void.

Where this spells trouble for the Wildcats is that Pat Fitzgerald and defensive coordinator Mike Hankwitz believe in lining up their cornerbacks by side instead of by matchup, thus allowing opposing offenses to "target" White. One can expect the Badgers to have Jared Abbrederis introduce himself to the young corner plenty come Saturday.

Regardless of whether or not Abbrederis is lined up against White, he should still have a field day based on Northwestern's porous play-action defense. With no strong defensive tackle, the Wildcats have to be ready to defend the run as a team, meaning they stack the box. The Badgers have seen more than their fair share of this tactic and Joel Stave has shown so far this season that he does have the ability to get the ball deep to his receivers in that situation.

At the same time, the Wildcats play extremely conservative when they have the lead, as they don't want to give up the big play. This was evident in the Ohio State game. 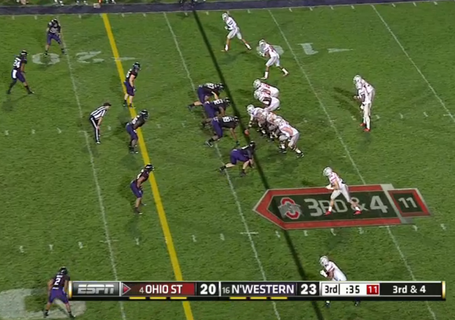 Trailing 23-20 with 35 seconds left in the 3rd quarter, the Buckeyes found themselves deep in their own territory at the 14-yard line and needing to pick up a first down on 3rd-and-4. Northwestern had its nickel package in, expecting a pass. The Buckeyes sent all their receivers downfield and the Wildcats followed. 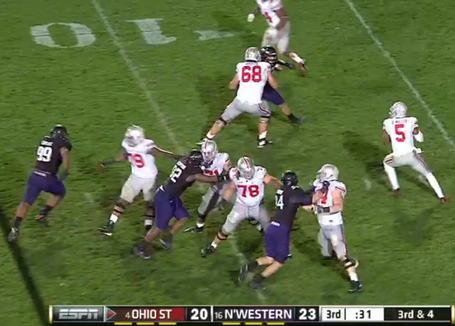 With just a four-man rush coming, Carlos Hyde is free to slip out of the backfield. 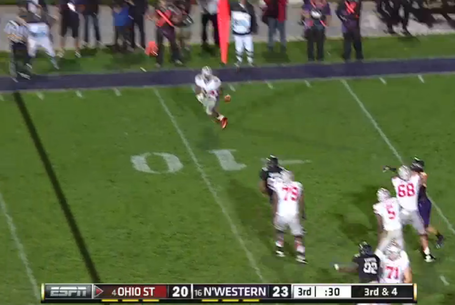 Granted, he is 4 yards behind the line of scrimmage, but Hyde is given the ball with plenty of open space to work with. Northwestern's conservative defense on 3rd-and-4 is the reason why. 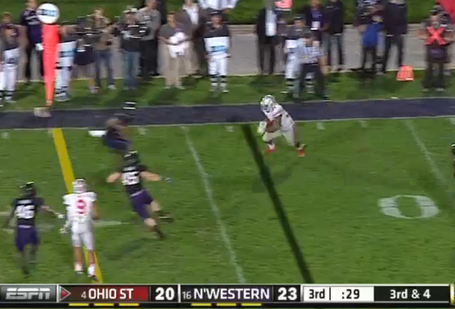 Now the Wildcats are faced with the daunting task of having to stop a 6-foot, 235-pound truck coming at full speed from gaining 4 yards. It should come as no surprise that Hyde picked up the first down with a few yards to spare as the Buckeyes continued to march down the field.

James White and Melvin Gordon should find plenty of space come Saturday, especially if the Badgers can get the deep ball going, which will soften up an already conservative Wildcat approach.

Wide receiver Rashad Lawrence entered the Ohio State game with just three receptions for 36 yards -- all coming in the Wildcats' 48-27 victory over Syracuse in the second week of the season. In Saturday night's game alone, Lawrence torched the Buckeyes' secondary for eight receptions and 149 yards. Sojourn Shelton and the rest of the Badgers' secondary will undoubtedly have their hands full with the 6-foot-2 Orlando, Florida native.

In the backfield, the Wildcats go with their star senior running back, Venric Mark. After sustaining a leg injury during training camp, Mark suited up and played in the season-opener against California but did not play against Syracuse, Western Michigan or Maine.

The 5-foot-8, 175-pound Tomball, Texas, native returned against Ohio State and carried the ball 17 times for 60 tough yards and caught four receptions out of the backfield for 43 yards.

Mark also is a return specialist for the Wildcats, with Fitzgerald sending him out for the kickoff return after Ohio State took the 34-30 lead with 5:22 remaining in the game. Mark returned the ball to the 40-yard line, the best return of the night for the Wildcats, but unfortunately for Northwestern, they were unable to turn that drive into any points.

Both teams are coming off losses to Ohio State -- sounds weird but it's true -- and neither wants to dig itself into a deeper hole as Big Ten play continues. For the Badgers, if they are to have any chance at all of heading to the Big Ten Championship Game in Indianapolis on Dec. 7, they need to go undefeated from this point forward. It's one game at a time, however, and with alumni in town for Homecoming Weekend, the Badgers do not want to disappoint.