A look at how Wisconsin's receivers adjusted routes to Ohio State's coverage -- or failed to do so -- and how that affected the Badgers' ability to move the ball.

Because Wisconsin has such run game prowess, many of its passing concepts attack the sidelines, away from the box area. In this area, the Badgers will often run "route adjustments" depending on the coverage. These adjustments rely on the quarterback and receiver seeing the same thing, and if they don't, it often leads to bad things. In this post, I'm going to try to piece together where these issues were made and talk about why you have these adjustments within your offense.

Not adjusting to Cover 2

I'm starting on this play, where there is clear miscommunication, because it provides me evidence on the next play. After the play, the tight ends points to himself, saying, "my bad," because he sat down in the hook zone rather than taking the route to the corner.

This is a defense that is in Cover 2 (you see because Ohio State cornerback Bradley Roby is rolled up underneath before attempting to gain depth since no one threatens the flat). This needs to be a corner route, not a hitch.

The easiest way to show why you use route adjustments is with diagrams. 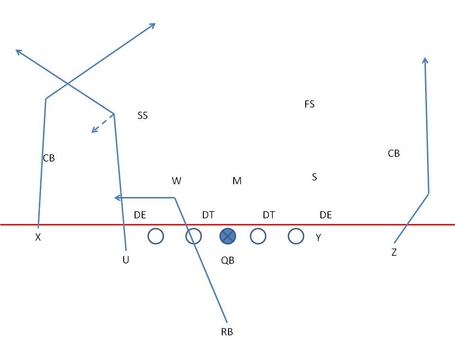 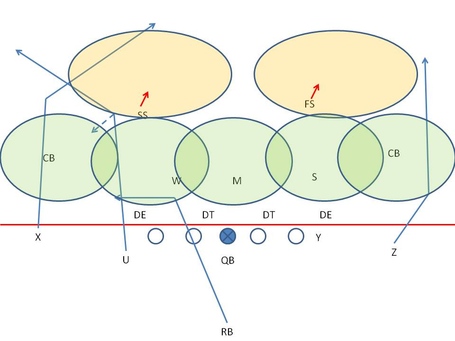 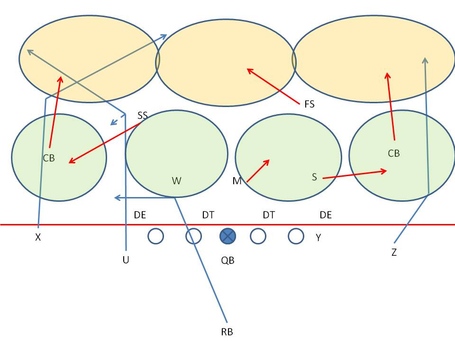 What you see is that in Cover 2, that hook/curl zone is pretty well covered by the outside linebacker. Throwing the ball there against Cover 2 is very dangerous because you have the safety over the top squeezing down and the outside linebacker gaining depth, meaning the ball needs to be put in a perfect window just to have a shot at a completion. So instead, you run the corner route to open grass. This puts the receiver in a position to gain distance from the safety and pick on the underneath corner.

Now against Cover 3, the opposite is true. The corner is no longer open because there is a cornerback sitting directly in that third. Meanwhile, because of how the coverage has rolled, sitting in the hook/curl zone will come open, as you pick on the flat defender again and work him inside/out rather than high/low.

This sight adjustment is used depending on the safeties. A single high safety (Cover 1, Cover 3) will sit, though against man the route likely will become more of an out route instead of a hitch so that the tight end can gain separation on his defender. Against two high safeties (Cover 2, Cover 4) the No. 2 receiver (second from the outside) will attack the corner. In Cover 4, because the No. 1 receiver (farthest outside) hitches, the cornerback will come up and the defense will essentially play like Cover 2.

Not adjusting to Cover 3

This one is a bit harder to tell. For one, what the receiver runs is a seam route all the way, down to where he takes his eyes after he passes the initial defender and how he doesn't turn his head until he is past the deep defender. It's also difficult to say because Wisconsin quarterback Joel Stave is hit as he throws. But...

If this wasn't meant to be an adjustment, there is no reason for Stave to pick this side to throw to. If this is simply a seam, which isn't a very good Cover 3-beater when there is nothing behind it to pick on the deep third, then he should have chosen the other side of the field, where he has an in/out underneath Cover 3-beater installed. But Stave looks like he gets a good read on the play and still chooses to go left, which to me means this play should theoretically be "mirrored".

Second, look at Stave's footwork. Even if he isn't hit, his footwork is taking the ball directly where it is thrown. Now, getting hit probably causes the ball to float a bit, making it a bit high, but the ball takes a path that is directly in the bubble of the defense. 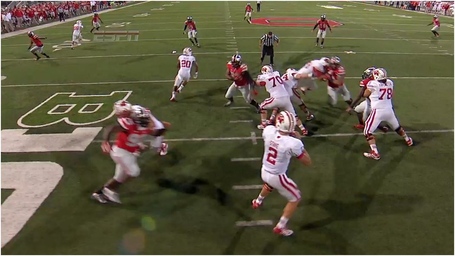 So, in my mind, it is likely that Stave intended to throw the ball in that general area (a bit lower, but he was hit), but the receiver failed to correctly read the coverage. Perhaps Stave just read the wrong side of the field, or maybe the play design is poor because carrying the seam just gets the receiver bracketed.

I don't believe either, though. This is the opposite issue as the last play diagrammed. Whether the receiver is aware of the route adjustment (he runs a seam the way you would run a seam against Cover 3 if there was a route behind it) or if he just fails to read the defense correctly is difficult to say, but that looks to be the problem here, as well.

I won't spend much time here, as the basics about this are above. Essentially, this is a post-corner route, where the receiver will fake the post and attack the corner. However, if he has retreating coverage on him (the cornerback playing over the top), he'll flatten his corner into more of an out. Roby was playing over the top of Wisconsin wide receiver Jared Abbrederis, and Abbrederis flattened his out cut for an easy completion.

Now, more often than not, Wisconsin made the correct adjustments on its pass plays. But in these two instances the Badgers didn't, and they resulted in very risky throws that didn't need to be risky if the quarterback and receiver were on the same page.

These are things that take reps and practice, both from the quarterback's perspective and from the receiver's, but to efficiently run an offense, particularly one that is so predicated on routes to the outside, these things need to be cleaned up if you want to move the ball consistently both on the ground and through the air.