The All-Big Ten linebacker's injury did hamper the team, but a fast start in the first quarter and necessary changes in the second half helped the Badgers' defense to a 56-32 victory.

Wisconsin went down to Champaign, Ill., to start the second half of its season Saturday night. Dominant a week earlier against a now-deflated Northwestern squad, Illinois' offense poised some unique looks and featured a veteran signal caller.

What the Badgers didn't expect was their own fearless veteran, senior linebacker Chris Borland, exiting with an injury four drives into the game. Despite displaying, at times, symptoms of what's been ailing the defense this season, Wisconsin's defense held on enough and made necessary adjustments to thwart any Illini comeback after jumping out to a sizable lead in the first quarter.

6th: National ranking for Wisconsin in total defense, giving up 285.0 yards per game (second in the Big Ten behind Michigan State)

6th: National ranking for Wisconsin in scoring defense, giving up 15.9 points per game (second in the Big Ten behind Michigan State)

5th: National ranking for Wisconsin in rush defense, giving up 87.6 yards per game (second in Big Ten, up five spots from last week)

18th: National ranking for Wisconsin in pass defense, allowing 197.4 yards per game (second in Big Ten, behind, you guessed it, Michigan State)

+2: Turnover margin for Wisconsin on the season (five fumble recoveries + five interceptions - eight turnovers), tied for 51st in the nation

319: Passing yards given up by Wisconsin's defense

72: Rushing yards given up by Wisconsin's defense

2: Number of sacks by Wisconsin's defense

6: Tackles for loss by Wisconsin's defense

Last Monday, head coach Gary Andersen stated how Illinois threw a lot of different personnel at defenses. He wasn't talking any coachspeak, either. By my count, in the first seven plays, offensive coordinator Bill Cubit threw out seven different personnel groupings, including starting the game with a two-quarterback, Wildcat look with Aaron Bailey taking the snap from a shotgun formation and Nathan Scheelhaase split out wide. To counter all the looks, defensive coordinator Dave Aranda used some of the following looks:

1. First four offensive drives for Illinois. With a healthy Borland, Illinois' first four drives resulted in -11 yards total, three punts and a fumble, which led Wisconsin to jump out to a 21-0 advantage early on the road. The pressure generated by the defense, especially B-side linebacker Brendan Kelly, helped. More on Kelly in a bit.

2. Second-half adjustments. After a disjointed second quarter, the Badgers adjusted their defense a bit. You saw early in the third quarter a switch more to a 2-3-6 or 2-4-5 alignment, with Nate Hammon getting in an inside linebacker/safety hybrid look. Adding pressure from Kelly, linebacker Vince Biegel and defensive end Pat Muldoon, among others, stifled the Illini offense often in the third quarter. If it wasn't for a personal foul penalty against linebacker Marcus Trotter, filling in for Borland, Wisconsin would have forced a punt after a short drive. Another impressive feat without Borland was a goal-line stop late in the third quarter, with Kelly, Trotter, safety Mike Caputo and defensive end Ethan Hemer all combining to tackle Bailey before he could cross the goal line.

3. Kelly. This was the best pass-rushing effort of the season from the senior, who forced a fumble and recorded a sack early on. Pairing him and Biegel in the second half, along with calling some different blitzes, helped contain the multi-faceted offense.

4. Trotter. He had a silly penalty in the third quarter to extend a long drive for the Illini, and it was a rough second quarter jumping into the line of fire. But the junior from Racine, Wis., did step up in a big way Saturday night. His nine tackles led the team, and he was all around the ball. Andersen thought inserting Trotter into the lineup did not change much of the gameplan in certain situations.

"It's hard to lose Chris, but we expect the next guy to pop in and make plays. Trotter was solid, got some things to work on, some issues that showed up, but overall he came in and played extremely hard and did some good things."

5. Rush defense. Everyone talked about running back Josh Ferguson and his ability to run and catch out of the backfield. The Badgers' defense held the Illini to only 72 yards on the ground, with Ferguson rushing for just 25 yards and and adding 2 yards receiving. Another impressive effort, as they are now fifth in the nation in rush defense and sixth in the nation. Even more impressive: both Wisconsin's offense and defense are Top 10 in the nation.

1. Big pass plays. 20, 51, 39, and 29 yards. Along with a couple 15-to-16-yard receptions and a 20-yard catch as well, it was a rough night for the secondary. Let's look at the 51-yard reception. This play-action was based off of an option run by Scheelhaase earlier in the game. Note how the Badgers work to flood the right side in that look, with the tight end and line rolling out of the pocket, but the Scheelhaase nicely fakes the option run and drops back. 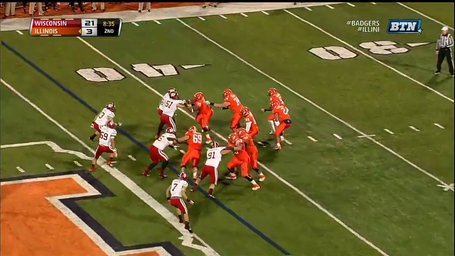 Note how the linebackers bite on the fake, but from a different angle, observe how safety Tanner McEvoy does as well. 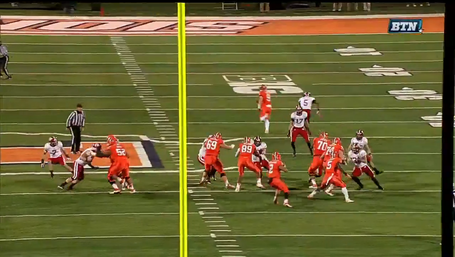 Rather than staying back in the middle of the field to provide inside help to cornerback Darius Hillary, McEvoy reads Scheelhaase, allowing receiver Steve Hull to get behind him for a huge gain that set up Illinois' first touchdown.

On the 39-yard pass to wide receiver Ryan Lankford, the Badgers only rushed three with their 1-4-6 alignment. The Illini kept six back, allowing Scheelhaase to comfortably air it out to his right with a very nicely thrown ball against decent man-to-man coverage by defensive back Peniel Jean. 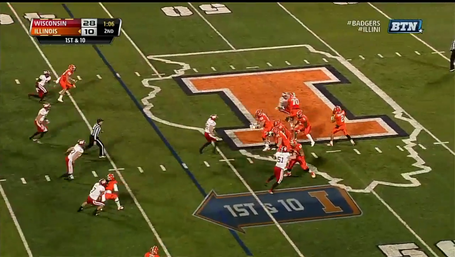 At times, Wisconsin only rushed three while dropping back eight. Did the scaled-back pass rush hurt at times? In this play and at times Saturday, possibly. But biting on certain fakes and other miscues in pass coverage also contributed.

"Last week the kid from Illinois threw a couple of dimes right on top of us, and their guys made plays, and we didn't.

"It's concerning, and we need to work hard to get better at it."

2. Up-tempo offenses. Three of the four Illini touchdown drives consisted of five plays or less. Those three drives were at least 53 yards. The 51- and 39-yard passes came on first downs. Remember, Wisconsin has had trouble on first-down throws earlier this year, particularly against Ohio State, when it allowedp two touchdown passes in the first quarter.

3. Penalties. Wisconsin had eight penalties overall Saturday, five on the defense. Two were unnecessary personal foul late hits by Trotter and linebacker Conor O'Neill, with two penalties going against Hillary along with the substitution infraction. Those didn't necessarily hurt the Badgers so much this week against an inferior opponent, but they have cost them in the past.

Another bye week, another week to regroup and get healthy. Without Borland, the defense struggled a bit, but not from anything unique that's been plaguing the team for most of the year. Wisconsin did force two turnovers, and it held Illinois on a nice fourth-down stand at its own 1-yard line. Second-half adjustments, particularly with that 2-3-6 look, seemed to help a potent Illini offense.

From all indications, Borland will play against Iowa in two weeks after his leg injury, and Wisconsin will work to face an Iowa team that wants to be physical.

"This is two heavyweights swinging at each other for four quarters," Andersen said.

"It's very obvious, watching that film real fast, that we picture ourselves a team that likes to get into those physical games. You don't have to watch but 10 snaps on Iowa to know that they like it, too. They like it a lot, and we like it a lot. So we need to be firing on all cylinders."