The Wisconsin defense obviously suffered without Chris Borland in the lineup for the majority of Saturday's game at Illinois, but the Badgers' bye week should allow the All-Big Ten linebacker to not miss any more game time.

The news is a relief for Wisconsin fans after Borland left Saturday's win over Illinois in the first quarter with a right hamstring injury.

"I don't know about the field goal thing, but Chris should be fine," Andersen said in his weekly Monday press conference. "I talked to him last night. Texted him last night, actually, and he seems to be fine. He said, ‘Coach, I'll be ready for Iowa.'" 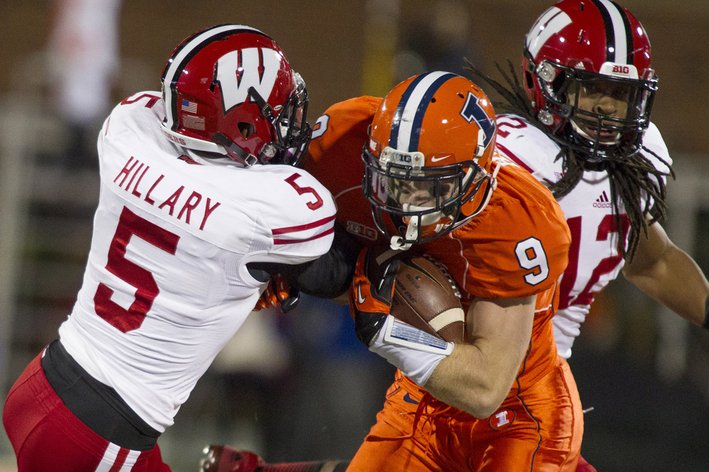 Our weekly Monday diagnosis examines the Badgers' consistency, or lack thereof, and certain players that can stand to improve in November.

Illinois scored 17 points over its next three drives after Borland, whose 57 tackles leads the team by a long shot, left the game in the Badgers' 56-32 victory.

It was only the third time this season Wisconsin has allowed more than 10 points. Andersen said Monday the Badgers' defense dropped eight players into coverage more often than in previous games, although he did not attribute that to the loss of Borland.

"The next opponent we're playing, we need Chris," Andersen said. "This is two heavyweights swinging at each other for four quarters. We picture ourselves as a team that likes to get into those physical games. You don't have to watch 10 snaps of Iowa to know they like it, too. They like it a lot, and we like it a lot, so we need to be firing on all cylinders. It'll be a good break for us. We'll use the break to help us to be as fresh as we possibly can."

It was a bit of a surprise to many when Wisconsin did not crack the initial BCS rankings, which were released Sunday night.

The Badgers are ranked 24th in the USA Today Coaches and Harris polls, but their computer ranking wasn't high enough to rank them in the top 25 of the BCS. Along with Ohio State at No. 4, other Big Ten teams to make the BCS cut were Michigan (No. 22) and Nebraska (No. 24).

Andersen doesn't seem to think these rankings matter in the least bit, especially this early in the season. He said he believes the omission doesn't hurt the Badgers' chances of making a fourth straight BCS bowl at the end of the year.

"I would have no idea what the BCS poll even was or if we were in it if (I wasn't asked)," Andersen said. "I'm only going to worry about the things I'm going to worry about, try to get the kids to go play every single week. I haven't even really thought into that, but I've been to two BCS bowl games in my life, and at the end of the year, they were really good teams. If you're really good at the end of the year, you probably have a good opportunity here to go to a BCS bowl."

Andersen said there's "no situation" involving kicker Kyle French's decision to forgo his senior season in 2014, reiterating the decision was French's and the coaching staff supports that decision.

French's decision to make this season his last with the Badgers' football program came late last week, after he lost his starting job as Wisconsin's place kicker. He has made 5-of-8 field goals this season and did not play against Illinois Saturday.

"He's in a position to where he wants to potentially finish his degree, which is the most important thing to me," Andersen said. "It's a good spot for him to play this year out. We discussed life, just like I do with every kid in the program. It's what matters to me. I want what's best for them.

"I think he believes he's moving in the right direction for the football team, No. 1, and for himself for the rest of the season and in the future as he prepares to go in the direction he's going. He knows he's got my support. He knows I'm there for him, and I will be today and 10 years from now. He's a great kid."

Watt did not receive a carry and caught one pass for five yards, but his impact, as usual, was felt outside the stat sheet.

"Watt was as good as he's played," Andersen said. "He's the player of the game for us from a staff standpoint as far as the offensive side of the football. He's not flashy. All he does is do his job. He does it with physical-ness, and he takes great pride in every single snap. He did a tremendous job."