A balanced offense in the first half gave way to a run-heavy onslaught as Wisconsin's offense carried the team to victory over Illinois.

Wisconsin head coach Gary Andersen stated in the post-game press conference Saturday night how potent his offense was after a 56-32 win over the Illinois Fighting Illini:

#Badgers coach Andersen "The offense was powerful. Good mix of run and pass. They're firing on all cylinders for the most part."

And it was true. With the defense in a bit of flux with star linebacker Chris Borland, out for the better part of three quarters, the offense dominated the line of scrimmage and consistently overwhelmed the Illini defense. Wisconsin's balanced offense in the first two quarters equated to an impressive four first-half scores, but it was a second-half adjustment by offensive coordinator Andy Ludwig to employ a run-heavy game plan that wore down its opponent to seal the victory.

7.1: Yards per play against Illinois

6.7: Yards per play against Northwestern

0: Catches by the rest of the Badgers' receivers

43: Season total for catches for Abbrederis

105: Rushing yards at halftime against Illinois

184: Rushing yards in second half against Illinois

114: Passing yards at halftime against Illinois

75: Passing yards in second half against Illinois

0: Number of turnovers by Wisconsin's offense

1: Number of sacks given up by Wisconsin

1,012: Number of rushing yards gained by Gordon through seven games

7-for-7: Red-zone conversions by Wisconsin into touchdowns

2: Thumbs up by this writer for the tweaks to the Wisconsin uniforms Saturday night

1. Run game. Illinois came in with the 97th-ranked rush defense in the nation. Ludwig and his offense exploited it, and especially wore the Illini down in the second half. Utilizing sets using two or more tight ends especially in the second half with two-back, two-tight end personnel, the Badgers made a two-score lead at halftime expand to a four-score lead at the end of the third quarter while dominating the time of possession in the fourth. Gordon and White found holes and daylight as their linemen frequently got to the second level of the defense to block Illinois' linebackers.

2. Zero turnovers and one sack. For the most part, left guard Ryan Groy and the front five kept quarterback Joel Stave upright for the game. Pressured less than a handful of times, he was sacked just once. On top of that, zero fumbles or interceptions foiled Wisconsin's drives. The Badgers were plus-two for the day in turnover margin, and they scored 14 points off of Illini miscues.

3. Wisconsin's power play. Not talking about Wisconsin's hockey team here. Rather, this great breakdown of your standard power run and its variations from Smart Football. Essentially, it involves the play-side (side the play is going to) linemen blocking down, with a fullback or tight end "kicking out" the defense's end man that was unblocked due to the blocking down. Then, the backside guard pulls to take out the first guy that comes up to plug the hole, normally the linebacker to the play side. In the second half, Wisconsin wore down the defense with variations of this simple play dating back to Vince Lombardi's patented power sweep, and also utilized this nicely in the goal line, as you'll see below.

4. Red zone conversions. 7-for-7 is nothing to scoff at. Ludwig, when speaking with reporters Tuesday, complimented Stave and how he's progressed, especially in the red zone. With two touchdown passes from the Greenfield, Wis., native along with that potent 23 goal-line personnel, the offense did not force kickerJack Russell attempt to convert on a single field goal.

1. Underthrows. This is getting nit-picky here (there has to be something that went wrong). There were three passes by Stave in the first half that were either underthrown or behind the receiver. The throw to tight end Jacob Pedersen in the first quarter near the goal line appeared to be behind him, while Stave later skipped a throw to Abbrederis (whether or not there was miscommunication or a wrong route run, that isn't known), but trying to throw 60 yards down the field into a big-time wind disrupted what would have been another huge Stave-to-Abbrederis playaction touchdown. Regardless of those incompletions, Stave was 16-of-21 for 189 yards and two touchdowns and helped lead the Badgers offense to another eight touchdowns.

When charting and dissecting plays, there's been a set personnel that's nearly guaranteed the ball crosses the goal line this season. It involves the two-running back, three-tight end personnel, or "23" personnel. Saturday night, Wisconsin ran the ball three times at the goal line in this personnel, and three times it scored, mostly using the similar principles of power in each score. 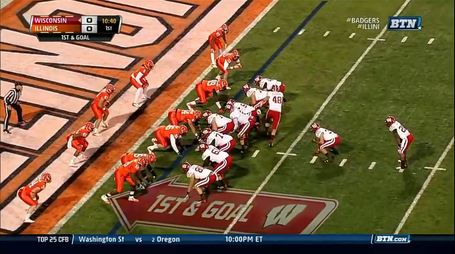 It's an I-formation set, with Pedersen starting off right, motioning left then heading back right to bring the strong side to right. Note in a power run, the play-side linemen all down block, with the fullback, in this case Derek Watt, kicking out the end linemen (No. 55, linebacker Houston Bates). Groy pulls right as White takes the ball from Stave. 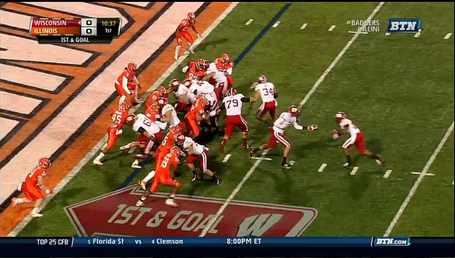 White follows Groy to the right side of the line as the left guard takes on the first defensive player he sees. 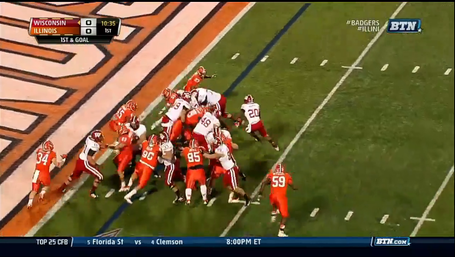 Watt blows up Bates, who goes inside on the play, and White rushes in for the 2-yard score.

Here's the example from the touchdown at the end of the second quarter. Two tight ends are to the left, with Pedersen again faking motion to the opposite side. 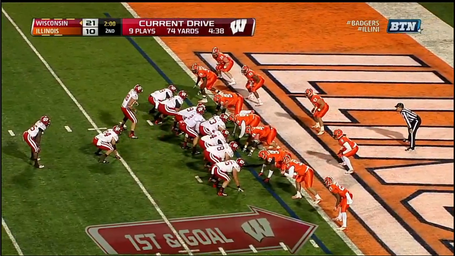 Instead of taking this to the left, which is the strong side, the play goes to the right, with now both Pedersen and Groy pulling with Watt taking on Bates, who again goes inside. 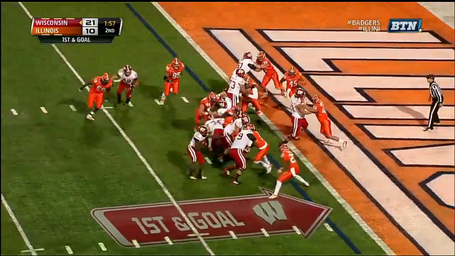 Pedersen and Groy meet Illini defensive back Earnest Thomas III (No. 9) a yard behind the line of scrimmage, but the two drive the 210-pound back toward the goal line as Gordon patiently waits for his block on his way to the end zone. 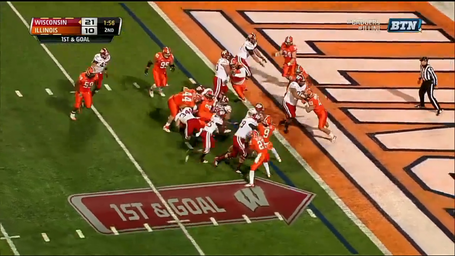 White's fourth-quarter score was similar to the first-quarter score to the right, except Pedersen took out Bates and Watt kicked out defensive back Eaton Spence. This formation has been nearly automatic when used on the goal line, and it utilizes Wisconsin's biggest assets: its linemen, tight ends and running backs.

The pulling guards were not just used in the goal line situations, but throughout Saturday's game. The power has been used throughout the season with mostly positive (and sometimes explosive) results, and along with the inside/outside zone plays, is a staple of the Wisconsin running game.

Wisconsin's offense put up its first 50-point performance of the year on the road in Champaign. The second half was a demonstration of the bread and butter of Wisconsin football. The team takes a bye week, its second in October, before taking on Iowa's 12th-ranked defense Nov. 2nd.