We discuss why Wisconsin struggled in pass coverage, with a particular focus on cornerback play.

If you followed along Saturday, you know I had some issues with the way Wisconsin's cornerbacks were playing. Much of it is being young, but there are things that you need to learn or else you'll eventually die by fire, which was the case Saturday. It's not they aren't good enough athletes; it's that their technique is still raw and they aren't doing the little things to help themselves out. Let's take a look.

Wisconsin played a lot of Over 4 and mixed in some Cover 3 against Ohio State. That's fine. Cover 4 is a great defense against the spread that allows the safeties to get involved in run support. Seriously, it's not a passive defense, but the Badgers didn't necessarily run it like some other teams do.

That's fine, too. There's more than one way to skin a cat, as they say. But it does tend to put a tall task on your outside linebackers, who have to defend against the run and also cover the entire hook/curl/flat zone immediately at the snap of the ball. So passes like this are going to happen:

And things like this, where OSU is directly forcing the outside linebacker to decide between run and bubble because the quarterback is optioning off of him are going to happen until you start moving that cornerback up.:

But like I said, it's fine. If you want to force a team to dink and dunk 5-yard routes to the sideline all the way down the field, most likely at some point they are going to screw up or you're going to jump a route and they'll get behind the chains and have to do something they aren't comfortable with.

The problem is, when you are conceding the short, outside zone, you better cover...

Time and time again, Wisconsin got beat over the top in coverage. Cover 4 is essentially going to look like man coverage on the outside, as long as the safeties are occupied. The safeties will be occupied by the No. 2 receiver or by the run action. Against OSU, it's often both. It's a difficult assignment being a safety, and it's a difficult assignment being a corner. It's the reason many teams don't run primarily out of the Cover 4, and the ones that do run primarily Cover 4 and nothing else. You need to be fundamentally sound in your technique, communication and reads because you are always going to be put between a rock and a hard spot as a defender.

This is where Wisconsin broke down. Lets start with the post-wheel play that Ohio State used to score its first touchdown. This time, Wisconsin is in Cover 3, which is alright because it brings the strong safety up as a force player to the wide side of the field. But the free safety and cornerback both make mistakes. 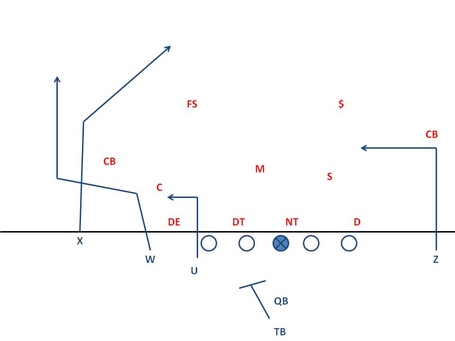 Where are the safeties' eyes taking him? To the dig route? If this is Cover 3, which I think it is, then he needs to check for the post. If it's Cover 4, the outside linebacker needs to turn and run on the out and carry the wheel downfield. But he releases like it's Cover 3, like he knows he has over the top help. So one of them had a major bust.

This is a problem that is going to arise several more times in this game alone. You are playing soft on the outside, which means you sure as hell should get beat over the top. In Cover 4, you don't know if you have inside help or not, so you can't just give up the inside route. In Cover 3, you still need to get over top of the receiver to slow the route so that the free safety can come over to help.

You don't play over the top to play trail technique. You don't play over the top to allow separation between the receiver and yourself. You play over the top so that you can turn and run, putting your outside shoulder (after turning, so you have an inside technique) between his shoulder and number. When you're running, your arm following through should constantly be elbowing him in the gut. If he can't get his hip past your hip, he can't get around you, and when his hip is no longer attacked to yours, you know you can start fading back with him and turn and find the ball.

So what happens with young corners? 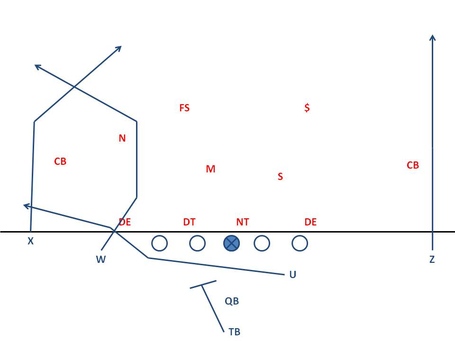 Before they fall off onto the out route, they fail to carry the skinny post with their body, to slow up that receiver's progress and help the free safety get over the top. Instead, they have separation, and while they get a clean run at the out, the quarterback has an extremely simple read to a receiver running in stride behind the defense with the free safety having no chance to catch up. Force the receiver to turn his skinny post into a post, force him to flatten the route to get around you to help your free safety. This is college football; you're allowed contact as long as the ball is in the air.

Perhaps more frustrating is that you know Wisconsin's cornerbacks were drilled on this very play, because even I saw it as a primary route concept from Ohio State's first game of the year.

This is why your ass is on the receiver's inside thigh; your hip is on top of his hip. Your shoulder is preventing his shoulder from getting around you because he can't go through you. If the cornerback is attached to the receiver here, if he is covering a man instead of grass, then this ball is never thrown. If it is thrown, the cornerback feels the receiver drop back, fades with him, finds the ball and makes a play on it. If you don't know where the receiver is because you lost him, then find him. Forget about the ball; find him and stick your hands in the air. But you took yourself out of position and then tried to follow the flight of the ball.

This is something that happened multiple times. Seriously, it happened more than multiple times, and Ohio State saw it and picked on it. I promise it's a point of emphasis this week, and you know it's being taught to them because...

They know how to do it

My guess is this is Cover 3. I can't see the coverage, but it ends up with a safety in center field, a cornerback following a receiver inside to center field. It also shows a cornerback playing hang coverage. Meanwhile, another safety is playing the flat. So what you're going to see is how you properly carry a skinny post from hang coverage.

See how the cornerback is attached to the outside hip of the receiver and is over-top of him? While locating the ball in the air, the corner continues to squeeze the receiver inside, squeezing his route flatter, and as the receiver tries to adjust more vertical, he is forced to try to run through the cornerback. But he can't run through the corner, because he is tied to physical laws of reality in which human bodies cannot dissipate, traverse through another body single atom by single atom, and then congeal on the other side, once again forming an Ohio State receiver and catch the ball.

This is what a cornerback is supposed to do. Put yourself in a position to succeed. That position is not 7 yards off the receiver when you're trying to locate the ball. It's not turning and running free because that's easy.

This is a learning curve for a lot of young players. They are used to being the quickest and fastest, and they are not used to quarterbacks putting the ball in the correct spot at the correct time.

But guess what? They are no longer still the quickest and fastest, particularly when they have to turn and run and the other guy just has to run. The quarterbacks are also much better, and even those not as successful at passing the ball will take advantage of wide-open receivers.

But I can promise that teams are going to check to see if progress has been made in this department, and if they haven't, they'll continue to pick on the defense with the deep pass. It's not that they aren't capable; you see it in their athletic ability and in flashes that they are. But when you're the one responsible for covering the deep ball, you better be consistent as well.